The Future of LNG

We’re living in chaotic times for the energy industry. Geopolitical instability, volatile prices, and the shift to clean energy all threaten the future of many conventional fuels like coal and oil.

But one fuel that has a bright future is natural gas — especially American natural gas.

Methane, as it is chemically known, is a light but energy-dense gas made up of molecules that only contain a single carbon atom each. It’s the most efficient fossil fuel by far — and the cleanest from a carbon footprint standpoint.

It’s also far more abundant than oil. There are more than 473 trillion cubic feet of natural gas underneath the U.S. — far away from the political turmoil of the Middle East and Eastern Europe. And in recent years, the advent of natural gas liquefaction technology has made it possible to condense natural gas into tanker-ready LNG — so it can be shipped around the world.

With all this in mind, it’s no wonder U.S. natural gas exports have more than tripled in the last decade…

Today, we’ll be profiling three profitable, dividend-paying natural gas stocks that investors can use to profit from the growing demand for this vital fuel.

But first, let’s look at how recent events have constricted the marketable supply of natural gas at a time when developed economies can’t get enough of it…

The European Union (EU) aims to be carbon-neutral by 2050 — and several of its member states have already shut down all of their coal power plants in pursuit of this goal.

EU natural gas demand grew by 5.5% to 552 billion cubic meters (bcm) in 2021. Most projections expect demand to grow or hold steady through the middle of the decade.

Some, like BP Energy Outlook, expect it to continue to grow through 2040, while others forecast modest declines (based on very optimistic decarbonization scenarios). 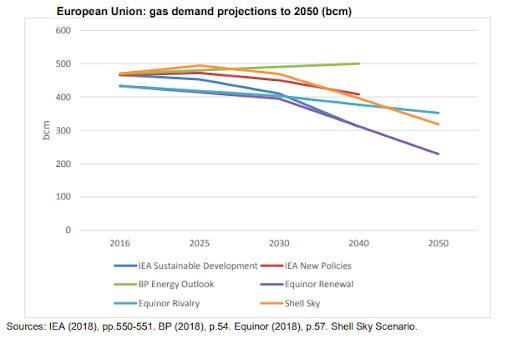 But regardless of which demand scenario plays out, Europe’s supply of gas took a big blow in 2022 as a result of the Russia-Ukraine war.

But in February, as Russian troops poured into Ukraine, Germany froze the construction of the Nord Stream 2 pipeline, which was expected to carry 55 bcm of gas per year from Russia to the West.

A few days later, as Russian airstrikes rocked Kiev and other Ukrainian cities, the EU retaliated with a sanctions package designed to sever most of its economic ties with Russia — and permanently kill Nord Stream 2.

In short, the EU needs to import hundreds of bcm of natural gas each year — and it recently lost one-fifth of its supply. The U.S. recently became Europe’s largest source of natural gas, and the U.S.-EU LNG trade should grow even faster in the coming years as a result of the war.

Meanwhile, American natural gas demand is projected to increase through 2040, while Chinese demand is expected to triple by that year.

Below, we’re looking at three American LNG stocks that are paying investors big dividends while supplying the world with the gas it needs.

Founded in 1993 and based in Houston, Cheniere Energy Partners is a master-limited partnership (MLP) that operates the Sabine Pass LNG terminal in Louisiana, the oldest and busiest LNG export terminal in the US.

Its shares have been on a wild ride in the last year, and it’s easy to see why. The company is astoundingly profitable and has a price-to-earnings (P/E) ratio well under 25.

It also pays a dividend above 5% at the time of writing.

Founded in 1998 and based in New York City, New Fortress Energy operates LNG terminals in San Juan, Puerto Rico, and La Paz, Mexico, as well as a liquefaction facility in Miami.

Its shares have taken a tumble in the last year, but it’s still profitable and has a forward P/E ratio of less than 15.

It also pays a modest dividend.

Founded in 2006 and based in Hamilton, Bermuda, FLEX LNG operates a fleet of floating storage and regasification units (FSRUs) — ships that essentially function as floating LNG import terminals, capable of transporting, storing, and regasifying LNG onboard.

Its shares have appreciated considerably over the last year, yet it still has a P/E ratio under 11.

It also pays a double-digit dividend at the time of writing.