Investing in Cryptocurrencies: The Good, Bad, and Ugly

I remember the first time I was able to use my debit card in a drive-through. It was about 20 years ago, and I was getting lunch at Wendy’s when the cashier asked, “Cash or credit?”

At the time, it was almost unheard of to use a debit card. But now, paying in cash is almost unusual.

We’re increasingly moving toward a cashless society. When I looked in my wallet this morning, I had $2 and some change. That’s not even enough to get a coffee.

But I also have my Visa card, which means that I don’t need cash.

The last time I withdrew cash? I think it was about three months ago, when I was buying some Girl Scout cookies.

With distrust of central banks and government at an all-time high, people are looking toward less regulated forms of money. For some, this means an open-source, unregulated electronic currency like Bitcoin.

Bitcoin to the Rescue 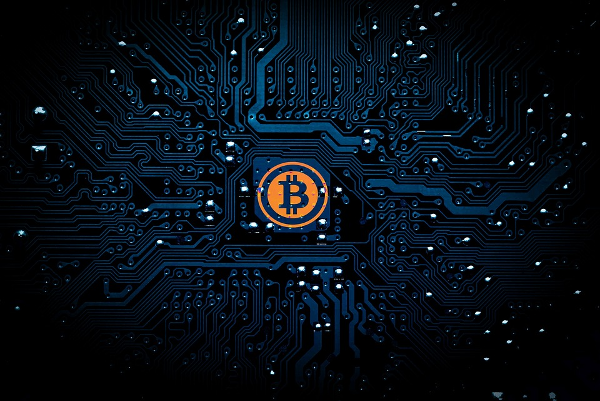 Nigeria has the third-largest bitcoin market, trailing right behind Russia. Nigeria is currently in the midst of transitioning to forgeign currencies to avoid inflation and depreciation of its domestic currency.

Nigeria’s inflation rate quickened “to the highest level in four years in March and is now more than double the 9% limit of the central bank’s target range.”

But Nigeria isn’t the only society going cashless; Japan has been moving toward this for some time as well...

In similar spirit, the government is now offering effective tax discounts to those consumers who turn their back on traditional paper and coin in favor of cashless systems, of up to 5%. The approach so far seems to be taking effect for Japanese policymakers, whose official aim is to double a previous cashless payment ratio of 18% to 40% by 2027.

Global virtual asset exchange Binance and Japanese crypto trading platform TaoTao did not reach an agreement on a strategic alliance to launch a joint venture in Japan.

In 2017, Japan intended to overtake both the U.S. and Chinese Bitcoin market in hopes of becoming the largest Bitcoin exchange in the world. These partnerships fell through in 2018, when Binance announced it was phasing out its service in Japan.

That’s close to the price of a kilo of gold.

People used to count on gold as a safe-haven investment. But now, with Bitcoin valued so much higher, many are turning to the cryptocurrency instead.

The graph below shows Bitcoin’s increasing value since its inception. 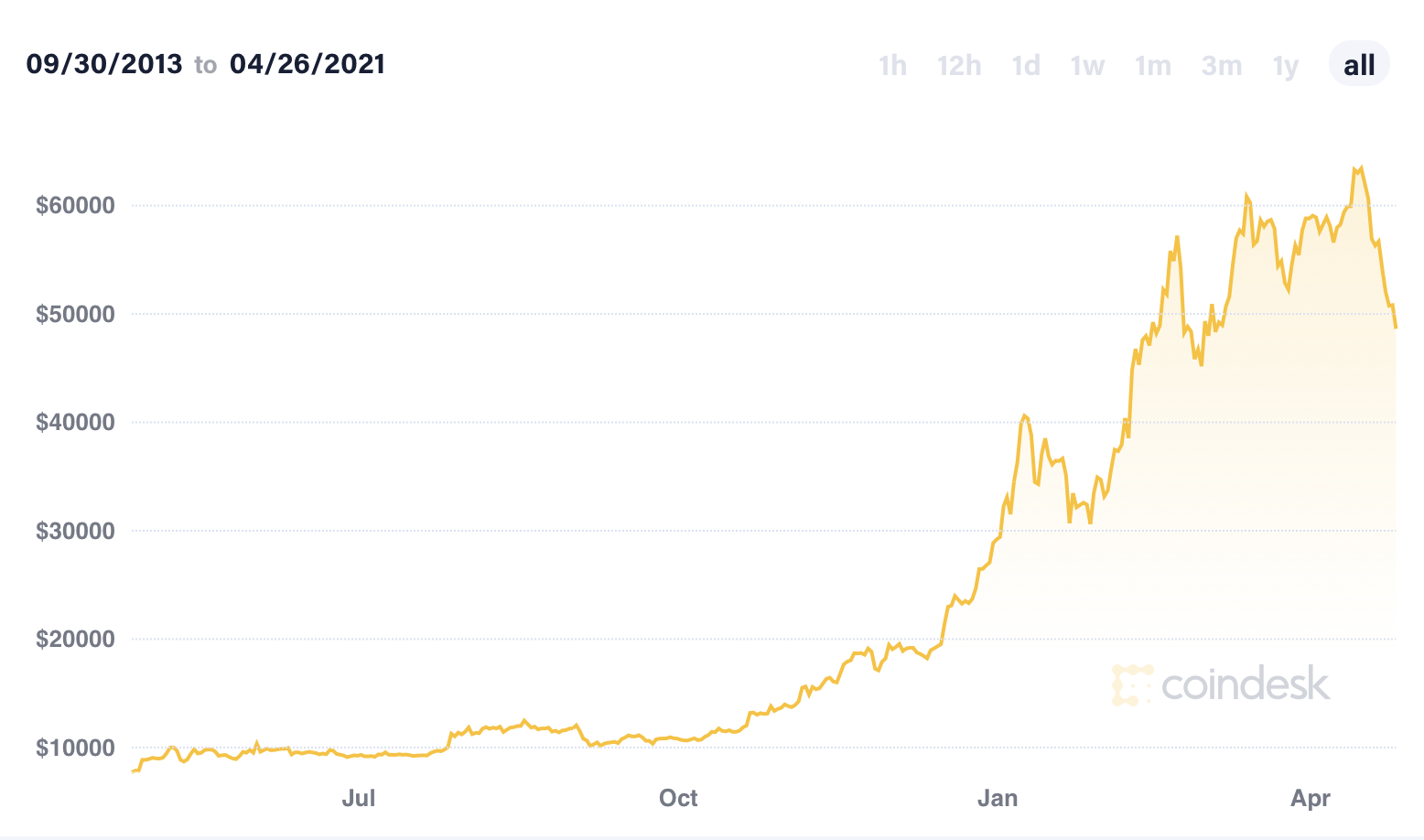 In its April Crypto Outlook report, Bloomberg bullishly predicts that Bitcoin will reach $400,000 by the end of 2021.

While Bitcoin may be the most well-known cryptocurrency, it’s not the only one that’s breaking records…

The total value of all cryptocurrencies passed $1 trillion Wednesday for the first time ever, per CoinGecko‘s index of 6,124 assets. At its prior peak in late 2017, the market’s total capitalization was just above $760 billion, according to TradingView.

“The $1 trillion mark cements cryptocurrency as an investable asset class that no longer sits on the fringes of Traditional Finance as a toy for retail investors,” said Jack Purdy, decentralized finance analyst at Messari. “It demonstrates that this asset class is large enough to absorb large orders like we’ve seen recently with the slew of institutions entering over the last few months.”

Ethereum is similar to Bitcoin, but it isn’t a currency per se. It’s actually an open-source computing platform that uses smart contracts.

Like Bitcoin, Ethereum is a distributed public blockchain network. Although there are some significant technical differences between the two, the most important distinction to note is that Bitcoin and Ethereum differ substantially in purpose and capability. Bitcoin offers one particular application of blockchain technology, a peer to peer electronic cash system that enables online Bitcoin payments. While the bitcoin blockchain is used to track ownership of digital currency (bitcoins), the Ethereum blockchain focuses on running the programming code of any decentralized application.

You may have heard people refer to Ether as well. Ether is Ethereum’s currency. It’s a way to pay for transactions and is a tradable cryptocurrency.

Ethereum has had a shocking six months. 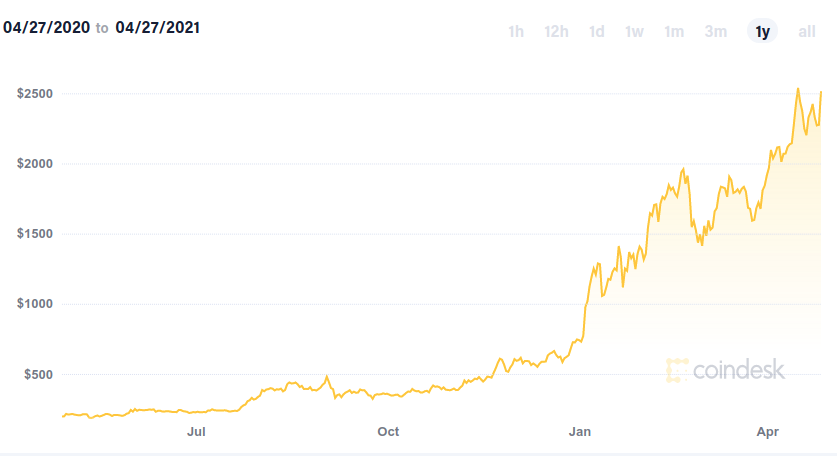 Investors are buying into Ethereum for several reasons. First, we’re moving toward a cashless society, and investors are quickly realizing the value of open-source, public platforms for banking and business.

And as we mentioned before, investors are using Bitcoin as they’d once used gold — as a bet against uncertain times. And there’s no doubt that the past year has been a tense one, with a global pandemic and a new president. We’re living in uncertain times, and it’s making Bitcoin, and now Ethereum, jump. 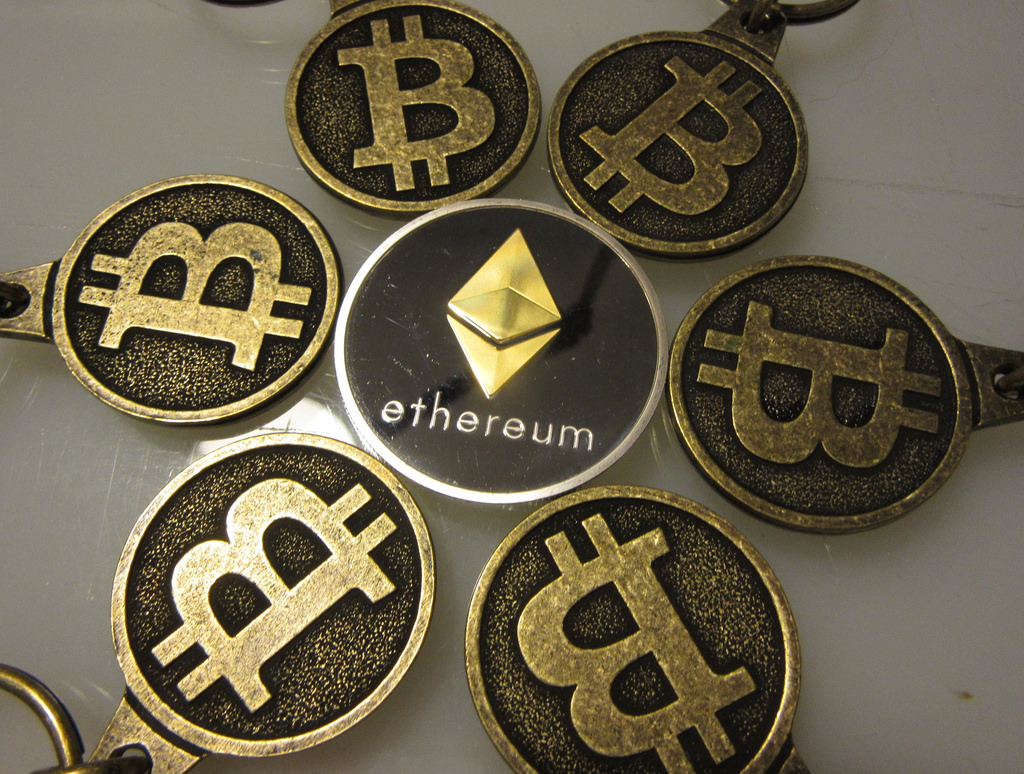 The last, and perhaps most important reason for investing in Ethereum is something called blockchain.

You see, one of the main problems with Bitcoin is its vulnerability. Because everything is online, it’s very susceptible to hacking, which makes investors wary.

But blockchain is supposedly unhackable.

The Ethereum project is using that Blockchain software to create so-called "smart contracts" that can self-execute. It has the potential to cut out the middlemen like banks and lawyers in transactions, revolutionising major industries.

Obviously, every financial institution wants to ensure that its transactions are secure. And with the release of blockchain, they can have more confidence in electronic currencies.

Binance Coin works with Ethereum to send money in a fast, secure environment.

Because of its Ethereum-base, Binance Coin is exposed to a good amount of opportunity via the Ether blockchain.

Some analysts think we could see Binance Coin double in value again.

Litecoin started the year off at an all-time high of $173.84 and is currently sitting at $259.06, which is an almost 50% increase since the start of the year. Litecoin was inspired by Bitcoin and is very similar in its technology and purpose. Like Bitcoin, it isn’t controlled by a government or bank and is also open-source.

The main reason behind the recent rally has been the rising support and adoption of SegWit. Litecoin, like Bitcoin, has a block capability that limits the number of transactions per block.

Segregated Witness, otherwise known as SegWit, limits the number of litecoins on the market. And as with anything, less supply leads to more demand — making prices jump.

Where Is Cryptocurrency Headed?

Since its record-breaking 2017 rally, analysts have kept a very close eye on Bitcoin. Analysts all over the world have nothing but high expectations for it, with some even bold enough to say that its price will reach $100,000 by August 2021.

Coinbase, a platform where cryptocurrency is exchanged, went public in April 2021. Its IPO and 56 million-verified user base reflect its $800 million first-quarter profit.

On average, these price cycles have increased the overall crypto market capitalization significantly from the prior cycle and attracted new users into the crypto-economy. These cycles can be highly volatile, and as a result, we measure our performance over price cycles in lieu of quarterly results. We believe that we can create long-term value throughout these price cycles.

Coinbase’s IPO was the first of its kind, paving the way for others to follow suit.

We're looking at being able to go public sometime next year…..It would probably be a direct listing, similar to Coinbase.

With a $2 trillion combined market cap and the public gaining more access to purchase and trade cryptos, would we really be surprised to see Bitcoin hit five figures?

Should You Buy Cryptocurrency?

A few years ago, fraud and hackers appeared in crypto exchanges and apps. Global and financial institutions responded with more regulations and security within companies like Bitcoin.

Of course, caution should be used when buying into cryptocurrencies. It’s a relatively new market. Even Bitcoin, which is currently the most solid cryptocurrency, has had severe ups and downs (in April, it fell nearly 23%). This volatility should be considered before making a purchase.

Because everything’s online, there’s also the issue of hacking. While no one has been able to hack blockchain yet, this doesn’t mean that it can’t be done. And while the lack of control by central banking systems is one reason people buy into cryptocurrency, it also means it’s not regulated or insured.

You could strike it rich if you buy into cryptocurrencies, or you may end up with less than you started with. Think about it in terms of the 1848 Gold Rush. Some people found gold in California, and they became very wealthy… But the majority rushed to California, spent a lot of money, and came back with nothing.

Now, we’re not trying to scare you. We’re just reminding you that cryptocurrencies are speculative, and if you buy into them, you should proceed with caution. Make sure that the site you’re using is secure and that you can afford to lose the money you’re investing.

That being said, we know that some of you still want to invest. You can buy Bitcoin, Ethereum, and Litecoin on Coinbase. It’s simple and easy to attach your credit card or bank account to your Coinbase account. From there, you can start buying and selling.

Here’s to the cryptocurrency millionaires! May we all know them, and may we all become them.