The North American natural gas boom has drawn many investors to profit from the domestic sector. Investing in the shale formations and the companies that operate in them has been lucrative, especially to those who got in early.

The U.S. became a net exporter of natural gas in November of 2016.

With the combination of hydraulic fracturing and horizontal drilling we were able to drill for oil and natural gas that had been in difficult-to-reach spots...

Of course, it was one thing to extract the gas, but another to sell it globally... you see for a long time the U.S. was only able to use pipelines and sell to a regional market.

But with the advent of a terminal for LNG (liquefied natural gas) in Louisiana, we began exports to Brazil, Argentina, India, and China.

But now investors are starting to look for other ways to get involved in natural gas — ways in which it's being put to use.

But there is also the growing presence of natural gas in vehicles, something that could grow into more than just a fad. The compressed natural gas industry could be the one to watch as the fuel begins to replace diesel and gasoline in North American vehicles.

Its main function is as a gasoline or diesel replacement. CNG and its liquid counterpart, LNG, are gaining popularity globally as alternative fuels for vehicles.

The fuels are particularly attractive alternatives as they burn much cleaner than either gasoline or diesel. Natural Gas Vehicles for America estimates that carbon monoxide emissions are, when compared with gasoline vehicles, 70% lower in natural gas vehicles. Carbon dioxide emissions are roughly 20% lower.

In addition, the use of CNG and LNG removes some of the dependence on oil. This is attractive for developing nations with large oil deposits that are starting to see a higher demand for fuel. These nations can offset some domestic oil consumption with natural gas to keep oil export levels stable.

It's also promising for nations that are heavily dependent on oil imports, as they can curb some of that demand by substituting it for natural gas.

The number of natural gas vehicles in Europe, Latin America, and particularly the Asia-Pacific regions has been growing since about 2000. The only places where this growth has remained stagnant are Africa and North America. 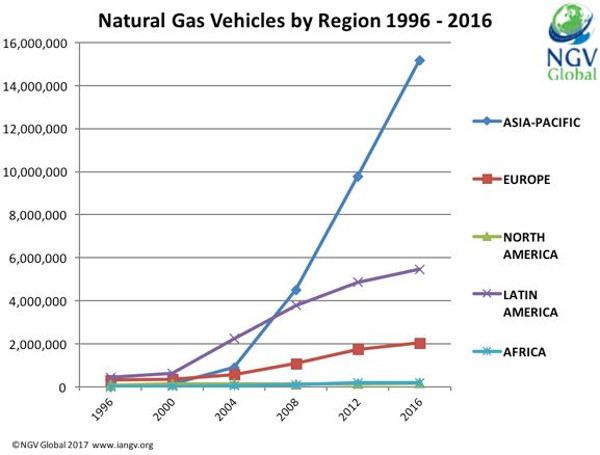 The fact that North America is on that list may come as a surprise. The region — the United States and Canada in particular — has seen tremendous growth in natural gas volumes in the last five or six years, since improvements in the fracking process made it possible to extract natural gas from shale deposits.

But the regions are, to this day, having difficulty building up the natural gas vehicle portion of the car market.

This may sound like a bad thing, but from an investment standpoint it's good news: the market is young. Companies that will one day lead the sector are just starting to make moves. Infrastructure that will be necessary and ubiquitous is currently scarce but valuable.

This could be the start of a shift in the North American transportation fuel industry.

But as the chart shows, the market has had some difficulty getting off the ground. We can attribute this to a “chicken-or-egg” scenario.

This follows the sentiment behind that age-old question: Which came first, the chicken or the egg?

Similarly, we must ask: Which will come first, the fueling infrastructure or the cars?

So where does this start? After all, this has to be the problem with most industries. What comes first?

Well, by the looks of it, the customer interest is there in the United States. If there's a way to save at the pump, Americans will want to take advantage of it. 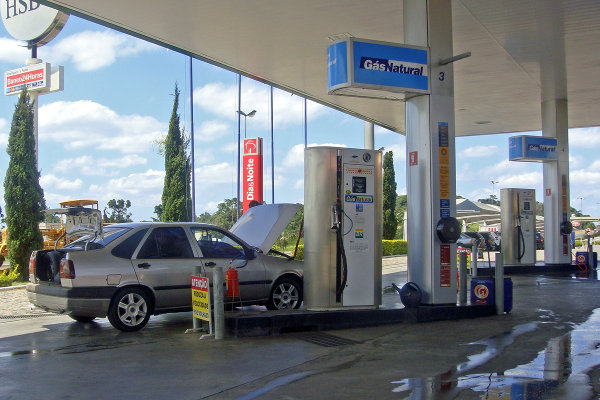 But if the nearest CNG filling stations are far enough away that drivers are spending more to get there, problems arise. Inconvenient fueling is one of the problems that has plagued the electric vehicle industry for so long.

Fueling stations need a reason to support CNG fueling technology. Higher demand from CNG vehicle drivers is the way to achieve that.

John Hickenlooper, the governor of Colorado, and Oklahoma governor Mary Fallin began an initiative in 2012 to increase CNG-powered vehicles in state fleets.

What began as a move by 13 states expanded to 22. Each state set up its own goal for incorporating CNG vehicles into its fleets.

And they challenged major auto companies including Ford (NYSE: F), Chrysler, and General Motors (NYSE: GM) to develop vehicles to meet the state's requirements — including a reduction in the price gap between standard vehicles and natural gas vehicles.

The change could be significant; this improved interest from this bipartisan effort alone will give fueling stations a reason to add the necessary infrastructure.

That's not to say some don't already exist. According to the U.S. Department of Energy, there are currently 937 CNG fueling stations across the nation.

But compare that to the 168,000-plus gasoline stations available across the country and you can see where the problem might be.

The bulk of the stations are located along the Northeast coast, in California, and in Oklahoma. Very few states are lacking stations entirely; the only states on the map without CNG stations are North and South Dakota, Montana, Hawaii, and Maine.

But they're still few and far between. You can find the station nearest you by clicking here.

How to Invest in CNG

There are a number of companies that deal specifically in CNG — in areas like fueling infrastructure, gas production, and natural gas vehicle manufacturing. If you're looking to invest in CNG and the development of natural gas vehicles, these two companies are a good place to start your evaluation process.

This California-based company specializes in natural gas fueling, vehicle conversions, and fueling station construction. The company also installs CNG fueling stations, and it has a number spread across the country. It also supplies CNG buses to transit fleets.

The company joined a contract with the Los Angeles County Metropolitan Transit Authority (Metro) in 2010 to support its CNG fueling facilities and buses. 99% of Metro's transit buses are fueled with CNG.

In 2012, Honda was the only company to provide a CNG-powered passenger vehicle. The Honda Civic Natural Gas has a starting price of $26,305 and fuel economy of 27 mpg city, 38 mpg highway.

The company ran a promotion with Clean Energy Fuels Corp., offering a $3,000 fuel card to a Clean Energy fueling station to all customers who purchased the 2012 vehicle between October 4, 2012 and February 28, 2013.

A word of caution: Honda is a major auto retailer. Though it does have the only CNG vehicle in the U.S., its business covers much more than that.

These companies provide just a small sampling of companies involved in compressed natural gas. They are early starters that have weight to their operations, but there are many smaller companies that are also involved in the market, and many more will appear as natural gas vehicles begin to grow into a North American way of life.