You can’t say we weren’t warned.

A decade ago, the U.S. Department of Energy released a report highlighting critical materials that would be key components for the development of clean technologies in the United States.

Buried in that report, however, was more than just projections. For materials such as lithium, cobalt, and rare earth elements, it was clear who was in control.

Just think... In 2010, the world’s largest lithium producers were Chile, Australia, and China, with Chile holding approximately 76% of global reserves.

Not surprisingly, we imported roughly 98% of our lithium from Chile and Argentina and relied on these foreign sources for well over half of our lithium consumption.

Don’t beat yourself up if it didn’t catch your eye at the time; most people ignored it completely.

The EV revolution was barely a blip on everyone’s radar.

We both know that was about to change.

There should be one question on your mind: How close are we to the bottom?

You know the story just as well as I do.

The hype over the EV sector sent speculators rushing into the lithium market in 2016.

Now, even though EV sales in the U.S. jumped 81% in 2019, let’s talk about the real elephant in the room in this market: China.

Compared to the Middle Kingdom, sales in the U.S. are a drop in the bucket. Last year, EV sales topped 1.2 million cars in China, which includes both battery vehicles and plug-in hybrids.

The lithium boom has always been a demand story.

Take a look at EV sales projections in China between now and 2025: 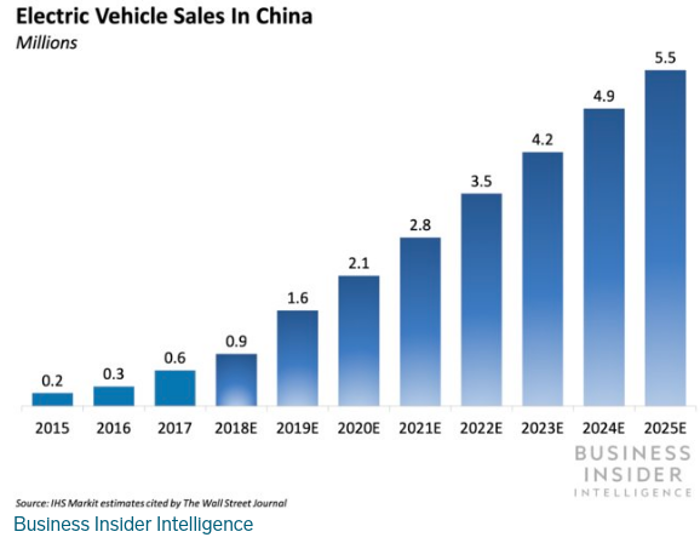 In fact, the IEA reported earlier this year that the global fleet of electric vehicles is expected to triple by 2030, with demand growing at an average yearly pace of 24%.

Moreover, the world will require more than 10 new battery gigafactories by 2025.

The world’s largest automakers are stepping up to that challenge and plan on spending over $300 billion investing in electric vehicle technology over the next 10 years.

And although I can show you incredible demand projections for lithium growth over the next decade, it’s imperative investors also follow the supply side of the equation, too.

Right now, the world’s biggest superpowers are maneuvering to secure their own supply, preparing for the next phase of the EV revolution, except, of course, the United States.

War Over the Golden Triangle

It’s no secret who controls this market.

After last year’s $4 billion deal by Tianqi Lithium to become the second-largest shareholder in SQM, China officially took control of over half of the world’s lithium production.

Keep in mind that China has already locked down the cobalt and rare earth markets.

Even Russia is starting to secure its own supply.

Recently, Russia’s state-owned Rosatom made its move in Chile after inking an MOU with Wealth Minerals, which will ultimately give Russia 51% ownership in the Atacama lithium project.

Meanwhile, the U.S. still relies on foreign countries for more than half of its lithium supply. Between 2012 and 2015, we received nearly 60% of our lithium from Chile, with another 40% coming from Argentina.

Is a lithium shortage on the horizon?

After the scramble to expand operations and boost production due to surging prices in 2016 and 2017, some companies now find themselves looking to cut supplies as prices bottom out.

That’s setting us up for one wild ride higher when demand starts making an impact.