There is a growing trend in the sustainable energy market...

The goal is to achieve zero carbon design buildings that make the same amount of energy they use during the year.

These green buildings employ several tricks to maintain a net zero energy consumption including solar panels, geothermal energy, tinted windows that let light in but not heat, and a bevy of other deigns that change with each building.

Here is a picture of one of these buildings that I see on the drive home from work everyday... 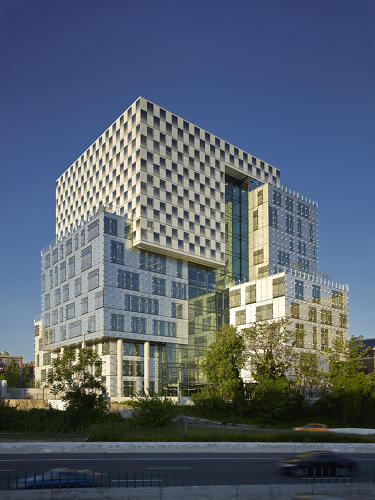 The John and Frances Angelos Law Center at the University of Baltimore is net zero energy, platinum LEED certified, and an attempt to help the campus become more energy efficient, and more appealing to the community.

According to a report released just a few days ago there are only 32 verified zero net energy buildings across the country, and another 110 buildings are in development or awaiting verification.

Clearly the trend is still in its nascent phase, but it may not be that way for long. These building projects will soon spread all over the world as more people start to see the value of minimal energy bills (not to mention the prospect for companies to appear to care about the environment).

In Jakarta, Indonesia where an estimated 40% of the world's geothermal capacity exists, there are plans underway for a 99 story skyscraper designed by Skidmore, Owings & Merrill that is planned to be zero net energy.

The massive project will use a geothermal plant in tandem with a wind tunnel on top of the building, as well as other types of energy retention technology to provide enough power to keep it running.

Okay, so maybe this trend isn't such a bad thing. And we both know there plenty of ways to make money with these investments, from solar panel manufacturers to companies making glass and other equipment used in zero carbon architecture projects.

And that's not to mention it's a reasonable way to ease some pressure on grids in large cities across the U.S., especially in places like California and Texas where utilities are already stretched pretty thin.

However, I find it difficult to believe that zero energy architecture will gain a firm foothold without being mandated by the government. Although that doesn't seem like a stretch these days, companies won't be willing to put up the astronomical costs involved.

The building at the University of Baltimore, for example, had a price-tag of $114 million, or $594 per square foot. That would turn off a lot of companies looking at the bottom line before focusing on environmental impact.

Of course, as we transition to green buildings and LEED certification requirements, the best bet on fuel will be natural gas. The fuel is a cleaner way to wean the grid off of coal. With it, of course, comes several wild natural gas profit opportunities for investors to take advantage of.