Your Cost of Living Is Soaring (Fed Chairman Powell STILL Not Concerned About Inflation!)

A new record high for the S&P 500 last week and anticipation of Federal Reserve Chairman Jerome Powell’s commentary, expected to be released Wednesday, set the stage for another important week in the markets.

Ahead of this release, the central bank revised its economic projections, with strong expectation that real GDP will grow 6.5% this year. The growth trends behind this dramatic increase are a continued decrease in COVID-19 infections and a sustained increase in vaccine rollouts. Additionally, the Fed revised its employment forecasts, stating it sees the unemployment rate improving to 4.5% by year-end.

This is all very positive news. But there are still concerns that we need to look at, and I think we will get some clarity on my inflation fears on Wednesday.

My big concern is that the Fed doesn’t take the inflation issue seriously enough.

I still remember the good old days when $20 would fill up your gas tank and still leave you enough change for chips and a soda. And that was only 20 years ago.

The disparity between wage growth and the cost of living, as a factor of inflation, is enormously underreported. The cost of housing, food, medical care, and transportation has skyrocketed since 2000: 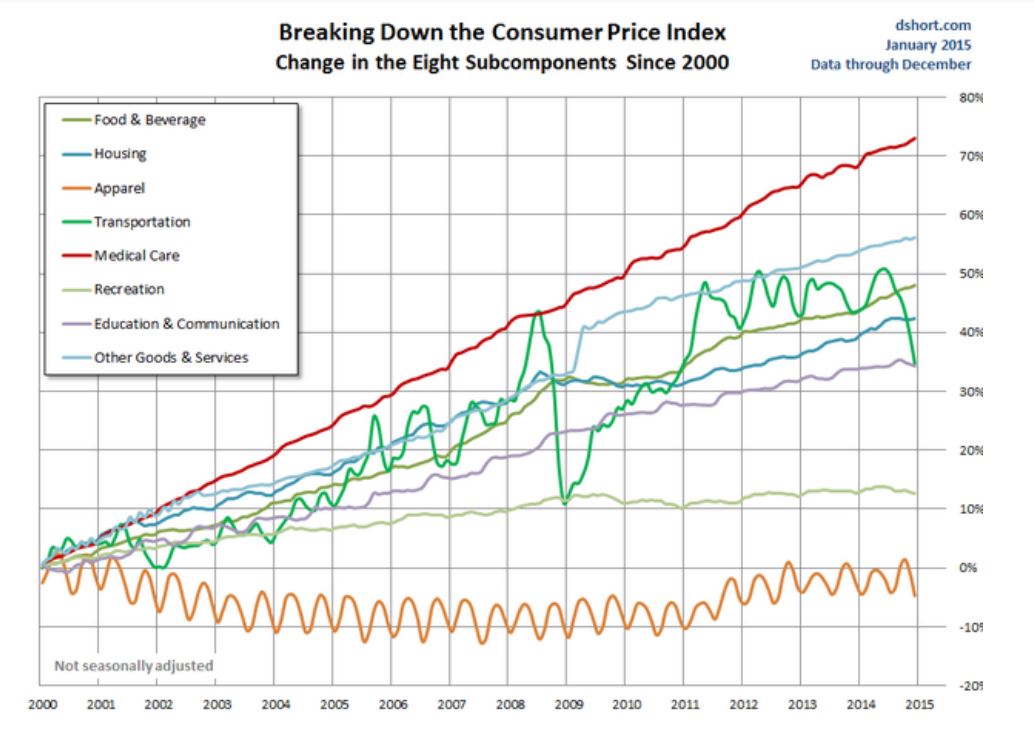 The most inflated of all categories is the cost of education.

It’s crazy to think about, but the typical family of today needs to bury itself in debt to send one kid to college, while less than a century ago in 1938, the average cost of sending a child to Harvard was $420 a year. Today, it’s about $80,000 with room and board.

And this disparity affects the middle class, workers, and retirees the hardest. Wages, Social Security payments, and taxes are adjusted for inflation annually. And if, as I have laid out, these costs are being underaccounted for, your wages or benefit payouts are less and your taxes are higher.

Yet the Fed's latest forecast indicates core inflation is expected to rise to 2.4% this year.

In March, as reported by NBC News, Jerome Powell was quoted saying:

We’ve been living in a world of strong disinflationary pressures for the past quarter century. We don't think a one-time surge in spending leading to temporary price increases would disrupt that.

I can’t think of anything further from the truth.

Unfortunately, inflation is never going to go away. That’s a fact. The preferred method of tracking inflation is to use the consumer price index (CPI). The CPI measures the cost of a basket of everyday goods that give a fair account of inflation.

But the CPI has a problem.

It fails to account for the modernized basket of expenses and as a result, the government doesn’t accurately reflect the true rate of inflation for some of the most important consumer components — like health care, education, and housing.

And since the CPI is the basis for Fed decisions on inflation, we’re screwed no matter what.

That’s why the inflationary measure I pay the most attention to is M2 money supply. 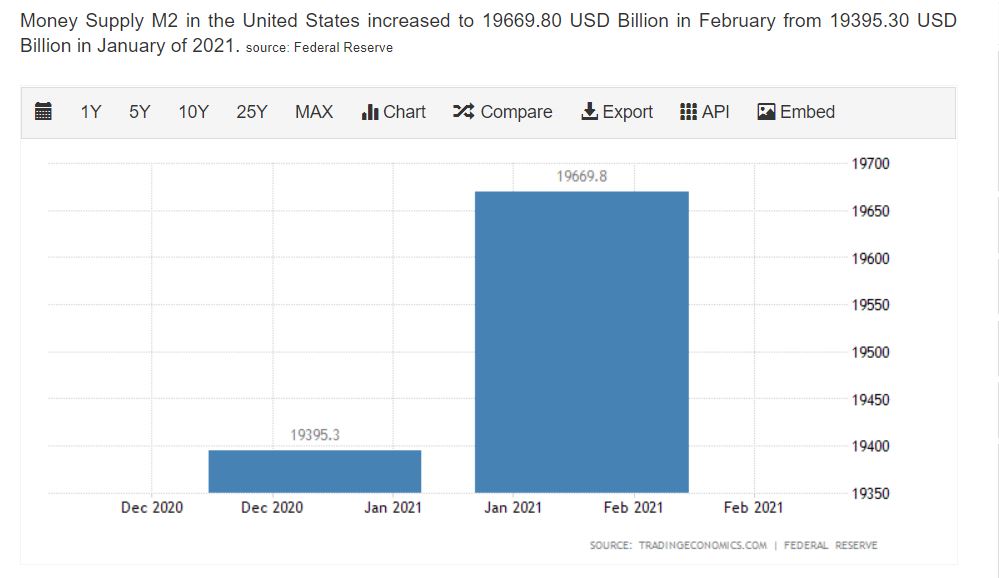 To me, this means inflation is a runaway train, hell-bent on destruction

But since the M1 money supply is what is used to calculate inflation as opposed to M2, we have a misleading idea that there is a deflationary environment rather than one showing that inflation is actually growing much faster than anyone will admit.

What does this mean for you?

It means your portfolio needs at least one or two allocations of a hard asset or commodity.

Now, I’m not saying you should rush out and load up on a ton of commodity stocks tomorrow morning.

But make no mistake — inflation is coming back, and soon... meaning you could earn big gains with a reasonable allocation of funds into gold and other commodities.