You Want to Make Money in the Oil Sector Right Now? Here’s How...

Oil prices crashed to as low as $27.34 per barrel last Sunday.

If that wasn’t enough to make the entire sector collectively cringe in pain and immediately avert their eyes from their screens, I don’t know what would.

But this isn’t our first rodeo, is it?

Back in 2014, we had to watch helplessly as OPEC waged a brutal price war against U.S. shale companies. If you were spared that carnage, then you didn’t have to experience oil prices tumble from over $100 a barrel all the way down to the low $30s.

Ah, now THAT was a real price war, folks.

In 2013, Prince Al-Waleed bin Talal warned in an open letter that "fracking" posed a serious threat to the Saudi kingdom.

At the time, our drillers were extracting 7.5 million barrels per day — roughly one-third of what they’re pumping out today.

The Saudis, for their part, were starting to accept that U.S. tight oil production was a legitimate threat to their dominance over global oil supply.

It took a year and a half for crude to bottom during that price war.

What we’re seeing today, however, is NOT a price war.

What we saw over the last seven days was more akin to a young child’s temper tantrum.

And yet, it opened up a hidden buying opportunity for a small group of investors to take advantage of this situation.

We Profited Before, We’ll Profit Again

Look, it’s clear that the Saudis were trying to put Russia in a corner ahead of their OPEC+ meeting.

Things were supposed to go well for everyone. The group gets together in Vienna, shakes hands with their feet, and everyone agrees to cut a little more off the top of their ongoing production cuts.

Heading into that crucial meeting, the Saudis even let slip that they would slash production by 1.5 million barrels per day

When you back a bear into a corner, don’t act surprised when it lashes out at you… and that’s precisely what Russia did.

But it wasn’t Russia’s announcement that they would increase output that was unexpected.

Truth is, Russia has been terrible at complying with production cuts that were already agreed upon.

Bloomberg recently pointed out that the only time Russia has fully complied with the deal was during a period when its exports were contaminated. 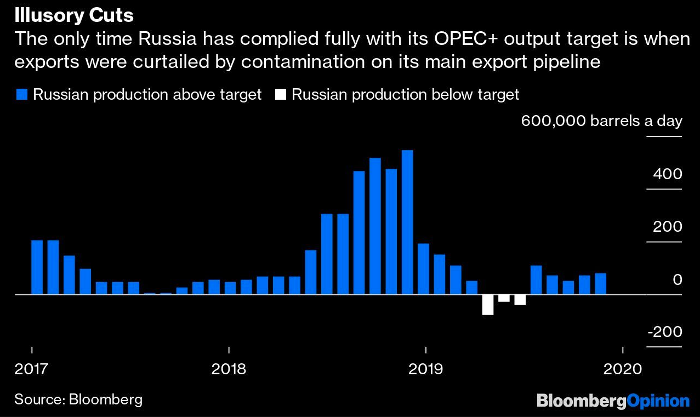 Putin’s harsh reaction may have started the sell-off, but it was the Saudis’ child-like tantrum that shoved crude prices right off the cliff after announcing it was boosting output to 12.3 million barrels per day.

Today, the Saudi Minister of Energy directed Saudi Aramco to increase its maximum sustainable capacity to 13 million barrels per day.

So how do average investors like us take advantage of low oil prices?

First, take stock of the situation.

Not only are both the Saudis and Russia planning on boosting supply, but also keep in mind that U.S. exports recently rose to record levels.

Couple this flood of supply with very bearish demand catalysts, and you have a perfect storm for a small group of oil stocks.

Although the impact of COVID-19 on global demand is still being weighed, the IEA cut its demand projections for 2020 and now believes that global oil consumption will contract by 90,000 barrels per day.

That’s a bit of a change from the more than 800,000 barrels per day of growth it was previously expecting.

For the record, this is the first time in 11 years that global oil demand will decline year over year.

There are two types of stocks I’m looking for when there’s a glut in oil: tankers and refiners.

And while the entire E&P sector felt the brutal pain of cheap oil prices between 2014 and 2018, refiners like Valero turned that opportunity into cold, hard cash for shareholders.

The Saudis’ shock-and-awe strategy isn’t going to scare Russia into suddenly cutting output, and they’re playing a dangerous game of who can last longer with oil prices in the $30s.

Next week, we’ll delve into a few oil tanker companies that can keep your gains running.