Who is the most important figure in U.S history?

Whenever I ask a reader this question, the replies I get are pretty typical.

George Washington, Ben Franklin... the well they draw on for their answer usually includes some prominent names we’ve all memorized from our school days.

Presidents, billionaire industrialists, and various political and movement leaders will make the cut for most of us.

But no matter how many times I ask, there’s one name that’s always left out.

And over the next few decades, his long-forgotten role in our past will turn out to be one of the most pivotal in U.S. history.

I’d even wager that only a handful of the members of our investment community here would recognize him.

He was a gunsmith named William Hart, and we can thank him for a $2.2 trillion payday just waiting for us beneath U.S. soil.

Waking up to Our Natural Gas Realities

Just about 201 years ago, William Hart was taking a stroll along Canadaway Creek west of Buffalo (go Bills) when he noticed bubbles of natural gas rising to the surface of the water.

With his curiosity piqued, all it took was a little 19th-century ingenuity to capture some of the gas. He ended trapping a little bit in a washtub and used a gun barrel to light it on fire through a hole he'd made in the tub.

That discovery led him to dig 27 feet into the ground. Unlike today’s ultra-modern rigs and equipment, Hart did it with the only technology available to him — a shovel.

Although it took him three tries to strike pay dirt, it became our country’s first commercial natural gas well. 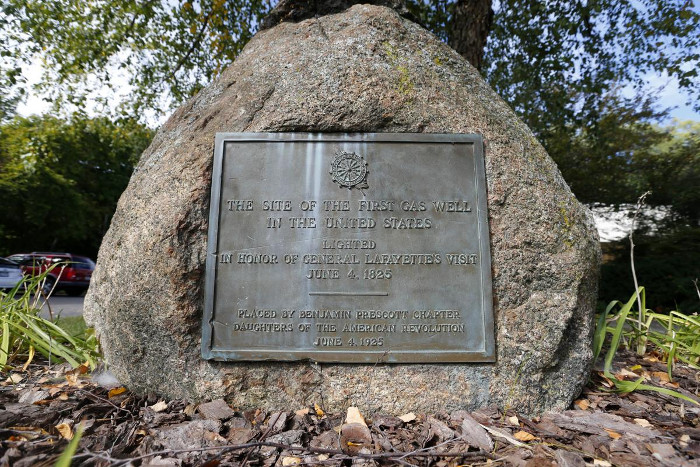 Soon after, the Fredonia Gas Light Company was founded, and William Hart cemented himself as the “Father of Natural Gas.”

I know what you’re thinking: Does Hart’s gas discovery 200 years ago really have the same impact as someone like George Washington?

I’ll let you decide that one for yourself. But before you do, consider the immensely powerful role that natural gas has played in the U.S. ever since Hart ambled along a creek in Western New York that day.

That event kick-started the U.S. natural gas industry, and it’s the reason we’re sitting on $2.2 trillion worth of gas today.

You''ll also get our free report, Infrastructure Stocks: How to Play the .2 Trillion Deal, sent straight to your inbox.

The $2.2 Trillion Payday Is Coming

I would argue that no other energy source on the planet is as important to our society today as natural gas.

Right now, the United States holds roughly 473 trillion cubic feet of proved natural gas reserves. And with the spot price at the Henry Hub currently sitting at $4.72 per mmBtu as I write this, that’s a value of $2.2 trillion resting comfortably underground.

In fact, Pennsylvania and Texas alone account for 45% of those proved reserves.

However, natural gas has been widely ignored over the last 15 years, ever since drillers started extracting record amounts of it from areas like the Marcellus. The massive supply boost that came during the shale gas boom caused prices to plummet.

But while prices were at rock bottom, something new and unexpected happened.

We learned that not only could natural gas be a vital source of energy for both our electric power and industrial sectors, but the world was yearning for more gas; approximately 70% of our natural gas demand flowed into these sectors in 2020.

If coal power ruled the 20th century, it’s undeniable that natural gas will be the king of the 21st century.

Our gas resources will be a crucial bridge away from dirtier sources like coal. A few weeks ago, we talked a bit about how countries are “green cleaning” natural gas in order to have any shot at achieving their future emission goals.

That’s what California did in the latter half of 2021. Gov. Newsom inked his signature on Senate Bill 423, a legislative action that suddenly turned natural gas into a zero-carbon source of energy.

But this is just the beginning of natural gas’ new reign.

You see, our huge domestic supply of natural gas has led to the U.S. recently becoming the world’s largest LNG exporter after Europe became desperate for more.

However, the cat's out of the bag now.

In the coming weeks, we’re going to look at several hidden gas gems in the market today and how 2022 will be wildly profitable for investors who are willing take a bite of our $2.2 trillion gas trove.

Stay tuned, because this story is just heating up.