It was only a few years ago that economic pundits were forecasting that China would take over as the world's largest economy. The U.S. was dead, they foretold with a wagging finger. The 21st century would be the Chinese century.

The first is COVID-19. Despite billions of dollars spent and two years of work, the Chinese version of the vaccine has failed. It doesn't work against the delta variant.

President Xi Jinping has a choice: He can either play whack-a-mole with COVID and shut down cities as the virus pops up, or he can let 5 million–15 million people die. Xi has chosen lockdowns.

The second problem is that China is aging fast.

Over the past 25 years, 400 million people have moved from the countryside into major cities. Urbanization and apartment living are not conducive to having children. Add in the previous one-child policy and the fact that some 40 million females were killed before they were born, and there are simply not enough Chinese women who have the desire or the possibility to have enough babies to replace the current workers.

And it is happening faster than you think. China’s population became older than the U.S. population a few years ago. 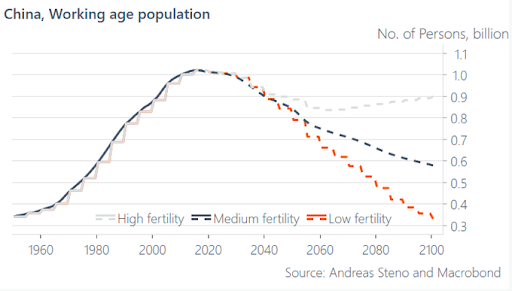 The problem with an aging population is that older people don’t consume. They save. Young people borrow to have families, build houses, start businesses and otherwise drive the economy. Retired people take money out of savings. They are happy with their 1995 Avalon, and they had the house painted last decade.

China got rich in less than two generations by using a Japanese idea called hyperfinancialization. It printed and spent and took in foreign investments. It built factories and infrastructure that created jobs building low-end products using German-built machines and U.S. innovation.

This is the same path Japan took (before it blew up in the 1990s) but with two major differences. Japan managed to work its way up the value chain from tin toys to Toyotas, and it got rich in the process.

This is why today’s economic news out of China is alarming. Retail sales, industrial output, and investment all slowed and missed their expected targets. Furthermore, unemployment for those ages 16–24 jumped to 19.9%, the highest on record.

In response to this data, the Chinese central bank cut interest rates by 10 basis points.

Lower rates won’t help China’s failing real estate industry any more than it saved Japan over the past 30 years. People who lost their life savings won’t be standing in line for another loan. There are many signs that the Chinese economy is on a knife's edge.

The third major problem China is facing is that its leader President Xi Jinping is up for an unprecedented third term in the next few months. Xi has killed, imprisoned, or scared anyone who would tell him how things are on the ground. Messengers are loathe to come forward for fear of being shot.

He has created a cult of personality, and he only cares about maintaining power. Xi needs to keep a lid on the pot as it tries to boil over. This will become increasingly difficult. Young people are quickly approaching a day where they will have no jobs, no money, no housing, and no wives, as well as soaring food and living costs.

The Davos Man might proclaim that more globalization is the future, but the reality is the opposite. The world is separating.

China delisted its five largest companies from the New York Stock Exchange. U.S. companies like Jeep are closing their factories in China, while others such as Apple are seeking new factories in Thailand and Vietnam. Large semiconductor companies like Samsung and TSMC are building fabs in the U.S.

Reshoring or nearshoring are the catchwords in boardrooms in the EU and North America as companies look to solidify supply chains and avoid political risk.

Look to buy companies in the United States that are replacing Chinese-made products. But you’d better buckle up. This deglobalization trend is just getting started, and the ramifications will be cataclysmic.