As the year closes out, it’s time to acknowledge one final achievement in the energy space.

Earlier this month, the U.S. brought its first-ever offshore wind farm online. The project consists of five wind turbines with a generating capacity of around 30 megawatts, located just a few miles off the coast of Rhode Island.

Until now, all wind power produced in the U.S. came from onshore farms. The lack of offshore development mostly stemmed from difficulties with regulatory approval, a hurdle we're finally seeing companies able to cross.

This project, in fact, is one of a dozen offshore wind projects being developed right now.

Power in the Air

Solar power may be the darling of the renewable industry, but wind is already a much bigger part of our energy mix.

In 2015, the Energy Information Administration reported that wind provided more than 1.8 quadrillion British thermal units of energy to the U.S.; solar only accounted for about 0.45 quadrillion Btu.

This is still an extremely small part of our total energy consumption, but it’s growing fast.

A lot of what’s keeping wind out of the spotlight is that residential wind power isn’t a factor. You can’t put a wind turbine on a roof, and Tesla sure isn’t coming out with ornamental ones to decorate your yard with... yet.

Most of the U.S.’s wind power gets built by two main customers: corporate companies and utilities.

Utilities can commission wind farms that feed clean energy to their customers alongside more traditional coal, gas, and nuclear sources. According to the American Wind Energy Association (AWEA), more than 40% of electricity providers in the country now get a portion of their product from wind.

One benefit of this is that wind is not a finite resource, nor is it a commodity to be bought and sold. Wind-powered utilities can therefore set constant prices that won’t fluctuate with volatile market movements.

This is also a benefit to wind power’s biggest customers: corporate bodies. 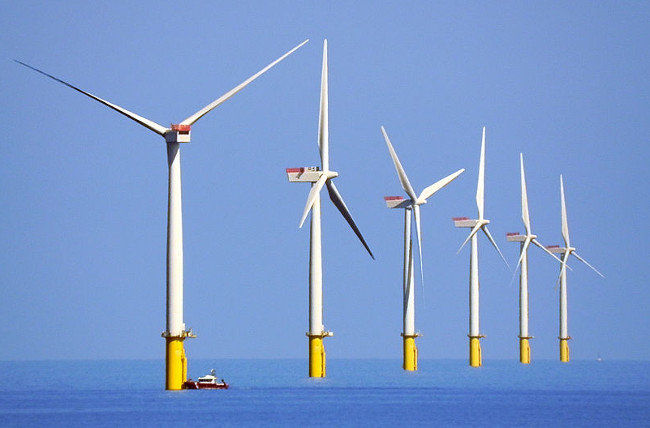 by companies like Google, Apple, and Microsoft as a clean, affordable way to power to their massive data centers.

These data centers require electricity 24/7 to keep everything running, and companies have found that a mix of wind power and energy storage does the trick.

As with anything, price is a big factor in how these projects are planned. Wind power is getting more affordable every day.

Since 2009, the AWEA notes that the average price of wind energy has dropped 66%. The cheapest wind power can be bought for about $0.02/kWh, beating out even solar with a low of $0.03/kWh.

That may not seem like much of a difference, but for large-scale operations, every penny counts!

As the technology is improved and its use becomes more common, prices will continue to fall. Wind is set to keep its spot as one of the top sources of renewable energy for a long while.

Now, we can’t neglect to mention the international projects that are bringing wind power into the spotlight.

Norwegian oil major Statoil recently won the lease to build a large-scale offshore wind farm off the coast of Long Island, New York. Details on the project have yet to be cemented, but the company estimates that the first turbine will have a capacity as high as 600 megawatts.

Statoil’s wind farm will contribute to New York State’s goal of being at least 50% powered by renewables by 2030.

In Europe, offshore wind is already pretty common. About one-third of new wind capacity was installed offshore in 2015, and 114 new offshore turbines were brought online in the last half of 2016 alone!

Maybe the most surprising development in the wind energy space is the team-up of Saudi Aramco and General Electric to build the first wind turbine in all of Saudi Arabia.

The turbine has already been delivered and will be brought online in January. Its capacity will be about 2.75 megawatts, which will be used to help power Saudi Aramco’s Bulk Plant.

We’ve known for a while now that the kingpin of the oil market was looking to distance itself from reliance on its usual commodity of choice. That it’s branching out into wind power is a step in the right direction and a sign of good things ahead for the wind energy industry.

Worldwide, wind energy capacity grew by 17% in 2015. More than 28 countries now have over 1 GW of wind power installed, and more are jumping on the bandwagon every day.

This is just the start of the wind industry’s biggest push forward, and now is the time to be along for the ride.

The International Energy Agency sees solar, wind, and natural gas as the biggest winners in energy through 2040.

Natural gas, of course, is the bridge from fossil fuels to renewables. It’s already on its way back up after a two-year rout. Solar capacity is expected to nearly double by next year, and we’ll have twice as much wind power by the end of 2020!

The best investments will be those with a hand in all three, like GE or similarly versatile Duke Energy.

Solar and wind still have a lot of catching up to do, but if you’re looking to cash in on the transformation taking place in energy right now, this is the place to be.