Gold prices are gearing up for another big run.

Following that decision, however, many will begin to focus on the central bank’s next move.

And that's where things get really interesting for gold...

Uncertain over the outlook for global growth, 80% of economists polled by the Financial Times said the Federal Reserve would lift benchmark rates two times or fewer this year.

Most economists are expecting the Federal Reserve to hike interest rates again in June, with more than two-thirds expecting a 0.50% rate hike for the year.

Rising inflation, recovering oil prices, and a stronger job market are all expected to prompt the Fed toward normalization.

The longer-term rate of inflation nearly doubled in January to 1.3%, the highest level since the fall of 2014.

Last week, Federal Reserve Vice Chairman Stanley Fischer even said, “We may well at present be seeing the first stirrings of an increase in the inflation rate, something that we would like to happen.”

Meanwhile, oil prices are on the rebound and the U.S. Labor Department just reported another increase of 242,000 jobs in February — about 27% more than expected.

The World Gold Council reports that total gold supply fell 4% last year to its lowest levels since 2009, led by a drop in mine supply.

This year, gold mine production is expected to continuing falling due to developm 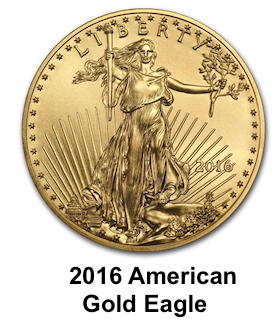 ent cutbacks over the past several years and a reduction in the gold purity of mined ore.

Meanwhile, the WGC says investment demand for gold increased 15% last year — not including the world's central banks, which also increased their holdings by 25% in 2015.

The U.S. Mint just reported that American Gold Eagle sales more than quadrupled year-over-year, even as bullion prices surged to a one-year high.

I believe that the gold bull market started in the summer of 2001. And it hasn't stopped.

In fact, it's actually going exactly as expected.

And right now, the gold market is on the cusp of one of the biggest moves yet...

We just saw the same exact thing happen between September 2011 and December 2015 (when the Fed decided to raise interest rates for the first time in a decade): a 40% decrease in gold prices.

And here's where things get really exciting...

Most investors don't realize that the biggest price moves of the 1970s gold bull market took place in a very short period of time.

With the Federal Reserve beginning to raise interest rates and solid supply/demand fundamentals going into 2016, we could be headed for similar gains.

Have a look for yourself... 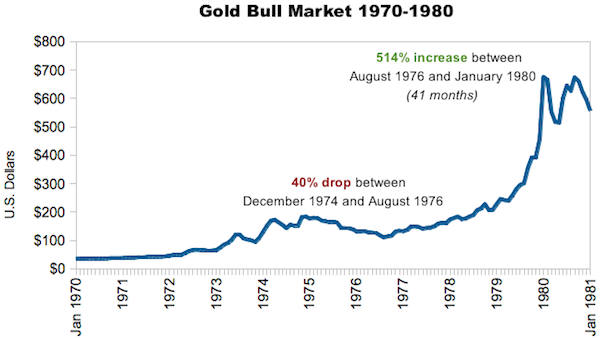 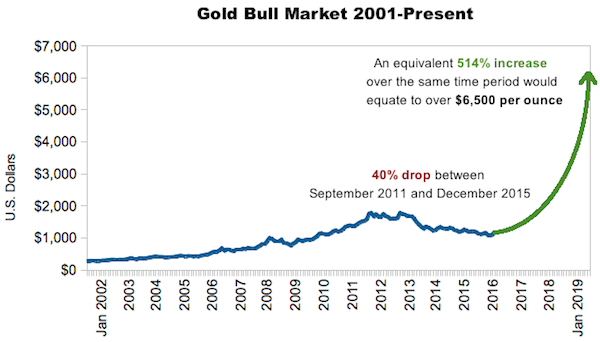 And remember, these are monthly gold price averages. The price of gold actually hit a high of $800 an ounce in January 1980. So the upside potential could be even larger.

Of course, there's no way of knowing for sure. But even if gold reaches its 1980 inflation-adjusted high, prices will more than double from today.

Either way, I believe there's simply no stopping gold prices from here. I'm all in.

In the very near term, gold prices should remain strong. All eyes will be on the Fed's announcement on Wednesday. As mentioned, economists are not expecting a rate hike this time, but investors' focus will shift to what June might have in store. So gold looks great going into the week.

Even though gold prices are up some 16% for the year, the yellow metal still has plenty of room to run. Over the next few weeks, we will be bringing you several different gold investing ideas here in Energy and Capital. So stay tuned.

The time to enter (or re-enter) gold has never been better. We're going to make a lot of money together.

Copper Investing 2016
Energy and Capital editor Luke Burgess gives his outlook on copper investing for the rest of 2016.
Is Tomorrow's Tesla a Faraday Future?
Energy and Capital editor Keith Kohl takes a closer look at the growing niche of electric vehicles.
OPEC Erupts in Civil War
Energy and Capital editor Keith Kohl covers the latest internal war brewing inside OPEC.
This Stock Jumped 1,000%...
The great Christian DeHaemer tells you how to make 1,000% on Chicken stocks.
Hydrogen Fuel Cells: The Downfall of Tesla?
Lithium has been the front-runner in the battery technology market for years, but that is all coming to an end. Elon Musk is against them, but Jeff Bezos is investing heavily in them. Hydrogen Fuel Cells will turn the battery market upside down and we've discovered the tiny company that is going to make it happen.