Will Energy Storage Expedite a Transition Away From Fossil Fuels?

With the rapid integration of renewable energy into the global power economy comes energy storage.

Renewable energy critics are often critical of solar and wind energy due to their inability to provide baseload power the way coal or nuclear does.

But with advancements in energy intelligence technologies and storage, baseload power is no longer integral to a stable, well-functioning electrical grid. In fact, because renewable energy additions to the global energy economy have been so large, there has been an increase in demand for energy storage, which complements the value of solar and wind power plants, which are now cheaper to build and maintain than fossil fuel power plants.

In fact, according to Bloomberg’s most recent energy storage outlook, which was released last Friday, the global energy storage market is now expected to grow 15-fold by 2030. 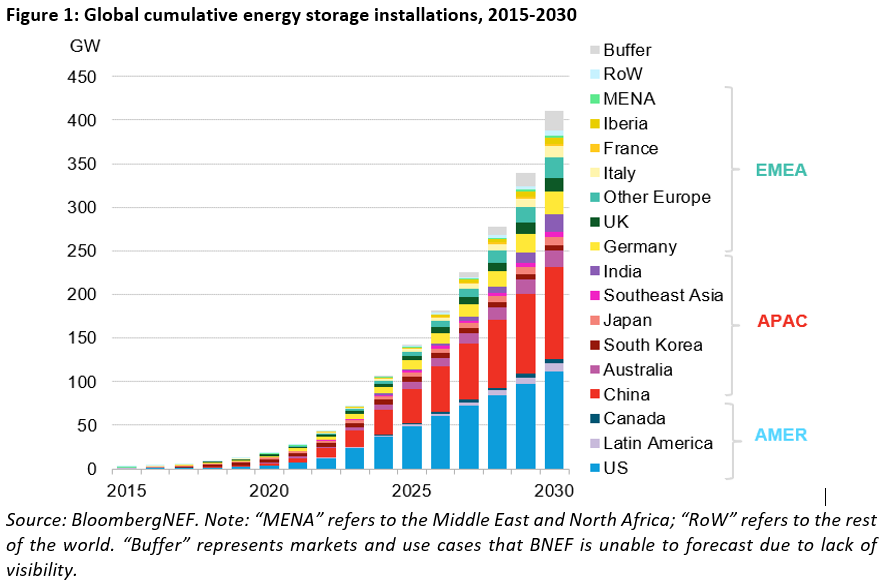 BNEF’s 2H 2022 Energy Storage Market Outlook sees an additional 13% of capacity by 2030 than previously estimated, primarily driven by recent policy developments. This is equal to an extra 46 GW/145 GWh. The most notable new policies include the U.S. Inflation Reduction Act, a landmark piece of legislation providing more than $369 billion in funding for clean technologies, and the European Union’s REPowerEU plan, which sets ambitious targets to reduce reliance on gas from Russia.

Whether or not you favor government intervention in energy markets, the data is clear…

An estimated 387 GW/1,143 GWh of new energy storage capacity will be added globally from 2022 to 2030 — more than Japan’s entire power generation capacity in 2020. The U.S. and China are set to remain the two largest markets, representing over half of global storage installations by the end of the decade. Europe, however, is catching up with a significant ramp-up in capacity fueled by the current energy crisis.

The anticipated acceleration of the U.S. market follows the passage of the Inflation Reduction Act in August 2022, with large volumes of funds allocated to wind, solar, and storage tax credits. The law will drive roughly 30 GW/111 GWh of energy storage build from 2022 to 2030, according to BNEF. However, while the new tax credit policy supports more growth based on BNEF’s long-term forecast, supply chain constraints cloud deployment expectations until 2024.

Russia’s invasion of Ukraine has had a clear impact on energy storage deployments in Europe. Record electricity prices are forcing consumers to consider new forms of energy supply, driving the residential storage market in the near term. The significant utility-scale storage additions expected from 2025 onwards align with the very ambitious renewable targets outlined in the REPowerEU plan and a renewed focus on energy security in the U.K. BNEF has more than [doubled its estimates for] energy storage deployments from 2025 to 2030 across Europe from previous forecasts.

Some of the companies likely to benefit from this increase in energy storage development include but are not limited to:

It’s also worth noting that an increase in extreme weather conditions affecting electricity generation will not subside anytime soon. In fact, it could easily be argued that this is the new normal — and this adds further value to energy storage.

We recently saw proof of this in California. According to The L.A. Times, during a critical peak on the evening of September 5, when the grid was quickly approaching capacity, California’s energy storage batteries provided more than 3,360 megawatts — that's more than the Diablo Canyon nuclear power plant, which tops out at 2,250 megawatts.

From 5:45 to 8:45 p.m. on that Monday, when the threats of mandatory blackouts were at their greatest, the state’s batteries pumped 2,000 megawatts or more continuously into the grid — a full three hours of grid-saving power. Batteries provided about 4% of supply during the peak demand, which averted rolling blackouts.

California’s experience served as a bit of a case study in how energy storage can be an integral part of a stable, well-functioning grid. And make no mistake, the energy policy gatekeepers have taken notice.

Yes, the world will still heavily rely on fossil fuels and nuclear for the foreseeable future, but to trivialize the value of renewable energy and energy storage technologies — particularly as investors — is an exercise in foolishness.