Take a second to close your eyes and picture a group of Exxon execs standing on top of a sand dune in Saudi Arabia.

With a huge grin, one guy stands at the front of the group and sweeps his arms in a wide arc. He turns to his colleagues and says, “We own all of this...”

Believe it or not, that was very much the situation five decades ago. The major oil players at the time (Exxon, Chevron, Mobil, Texaco, etc.) had a virtual stranglehold on the Middle East's oil industry.

These companies — better known as The Seven Sisters — held all the cards.

Up until the early 1970s, they controlled 91% of the Middle East's oil production and more than three-quarters of the world's oil supply.

As many of us are aware, things have changed. Roles have been drastically reversed.

Make no mistake, national oil companies have come to dominate global oil supply. But what you may not be aware of is that these NOCs are making your oil investments more valuable than you can possibly imagine.

Holding All the Cards

First, we need to understand how much control these NOCs have over global oil production.

When we refer to national oil companies, think of Saudi Aramaco, Venezuela's PDVSA, and to a certain extent, Mexico's Pemex (though we all know how things turned out for Mexico's oil production).

For any of my readers who don't know exactly how much oil these companies own, here's a glimpse at how lopsided things have become: 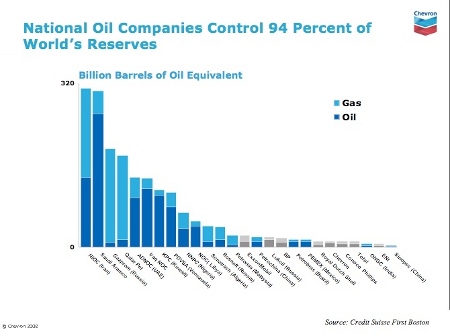 Today, NOCs command about 95% of the world's oil reserves. So remember that when you hear an environmentalist complain about "Big Oil," he's referring to the ExxonMobil, Chevron, and BPs of the world.

The fact of the matter is that ExxonMobil doesn't even crack the top ten on that list. It falls in at the fourteenth spot — and keep in mind ExxonMobil is the largest publicly-traded oil company in the world!

Along with holding nearly all of our oil reserves, the NOCs also control approximately 60% of global oil production and most of the world's largest oil fields.

But we already know about the condition of these giant oil fields. It's only a matter of time until these major fields topple like a stack of dominoes.

Something else is becoming increasingly clear: Big Oil is getting squeezed out of the picture.

During the last decade, NOCs have added more than double the amount of reserves than international oil companies like ExxonMobil and friends — making your oil investments more valuable in the process.

We've seen Big Oil forced to shell out billions of dollars to increase their reserves.

Do you remember ExxonMobil's $41 billion deal to buy XTO Energy last year? Or how about the $4.3 billion Chevron paid for Atlas Energy? Even Royal Dutch Shell dished out $4.8 billion in cash for 650,000 net acres in the Marcellus.

You see, Big Oil was late to the party. And acquiring these smaller players won't come cheap.

The BHP-Petrohawk deal proved that fact to us. BHP was willing to pay 65% premium for all outstanding shares of Petrohawk, including their stake in the Eagle Ford shale play.

And that leads to another problem.

Now the NOCs are taking notice, and leading the charge is China and its growing hunger for oil sands assets.

Nearly $10 billion was paid by PetroChina and Sinopec, the former picking up Encana's gas and shale assets and the latter gaining a 9% stake in Syncrude, the largest producer in the Canadian oil sands.

In other words, this scramble for a stake in North American unconventional oil and gas plays is making your oil investments that much more valuable.

The deals made over the last few years are just the tip of the iceberg — especially during a period when reducing our dependence on foreign oil will reach a critical stage.

There's an even stronger upside in developing these growing plays on U.S. and Canadian soil: This small company, for example, is able to boost production by offering producers a better way to tap the rich shale formations.

Canadian Oil Sands Fever
Mark November 1, 2011, in your calendars. Circle it. Put an asterisk next to it... Because by November 2, we'll know whether or not Canadian crude will continue to flow into the United States.
Underwater Gold Mining
Editor Keith Kohl reveals the next generation of mining, including one investment that you won't find in the mainstream media.
Keystone XL Pipeline
Canada could supply us with oil for centuries. It's almost inexhaustible... That's why I call it "the forever bull market." And just two weeks ago, the Obama administration approved the controversial Keystone XL pipeline project.
Why This New Pipeline Has Unexpected Profits
A closer look at why Canada's new pipeline will deliver investors more than just oil sands profits.
Hydrogen Fuel Cells: The Downfall of Tesla?
Lithium has been the front-runner in the battery technology market for years, but that is all coming to an end. Elon Musk is against them, but Jeff Bezos is investing heavily in them. Hydrogen Fuel Cells will turn the battery market upside down and we've discovered the tiny company that is going to make it happen.