Why the Dirty Oil Sands Aren't So Filthy

The week before Christmas always passes the slowest. And it's also easier to lull yourself into a daydream in the few days before a holiday — especially during the latter half of your work day.

One particular moment has been on my mind lately...

It was on the tail-end of a trip to the Athabasca oil sands last year — the second (and certainly not the last) such trip I had the pleasure of making.

We were less than eight hours from our destination with plenty of gas.

“I'm not sure this is a good idea,” my worried voice carried over the blaring vocals of John Fogerty. (Just in case you ever decide to take a 45-hour road trip, a little tip I humbly offer is to bring more than one CCR album.)

I already knew the reply before my co-pilot answered, "Nonsense. It'll be fine. Take that turn coming up.”

“I don't know, Field. The GPS doesn't lie.” I tried to sound convincing.

But he wouldn't take no for an answer, and I should have seen this unannounced detour coming.

He had had his face buried in the road map ever since Saskatoon.

I grudgingly pulled off the main road and cringed after realizing he'd lead me onto a dirt road. Loose gravel kicked up all around the car.

Even though this route was much more scenic than the highway, it didn't ease my mind one bit. But I looked over at my passenger, and he was happy as could be, legs resting up on the dashboard.

Several hours later, we had finally turned back onto main road. All was well... or so we thought.

Not even twenty minutes later, I could tell something was wrong. The problem wasn't hard to figure out because the flat tire was making the car roll unsteadily.

I had just enough time for a quick, “I told you so,” before Bad Moon Rising popped on the speakers. I already knew who was going to change the tire.

Closing the car door behind me, I silently thanked a higher power for the fact that it wasn't winter yet. The winter months can be unforgiving in Fort McMurray — especially to two guys from Baltimore.

I hadn't noticed it before, but the sign in front of the car was foretelling. 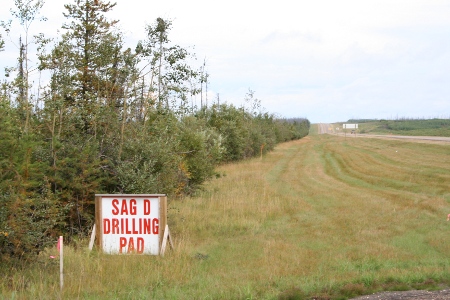 More than a year later, the latest oil sands report released by the Royal Society of Canada (RSC) has made me more bullish than ever before...

The message was loud and clear: More responsibility. More research.

But their findings had both ups and downs...

Here's a brief rundown of the report's conclusions over health and environmental concerns that have plagued the oil sands industry:

The 438-page report helps clear the air of many long-standing accusations; but it doesn't exactly praise the oil sands industry, either — highlighting several critical issues that need to be addressed.

So why am I so bullish when it comes to the oil sands?

For starters, the report has made it clear where the industry is headed.

Some of you may remember the last time we talked about the oil sands. It's obvious right now that in-situ technology must be developed for the oil sands industry to survive.

For starters, the staggering amount of oil is very misleading. Most investors see a trillion barrel oil resource, yet don't realize that only about 20% of the ultimately recoverable bitumen can be economically extracted with surface mining.

During the next decade, we're going to see in-situ recovery become the dominant form of oil sands production. 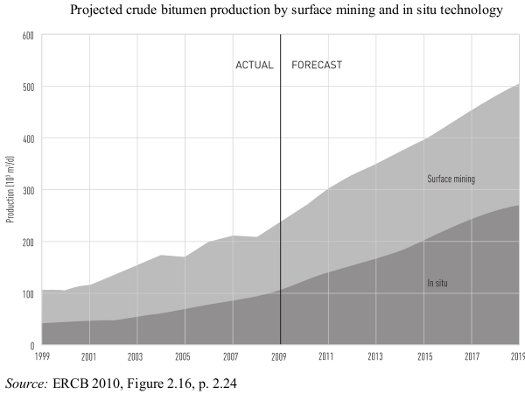 Companies are already preparing for it.

This morning, Suncor Energy (NYSE: SU) announced its plans to increase production to more than a million barrels of oil equivalent by 2020.

According to the release, the majority of the $2.8 billion allocated to growth spending will be put toward their Firebag in-situ facilities.

The RSC report points out that in-situ developments have produced about 40% of their estimated initial reserves — yet those reserves make up less than 3% of the total estimated reserves believed to be recoverable under current technology.

Popular in-situ techniques like SAGD are not without their own obstacles, including the intensive GHG emissions associated with steam generation.

Over the next few weeks, we'll delve further into several oil sands companies addressing these issues — including a few ways for investors to get a piece of the action.

Have a safe and happy holiday,

P.S. The oil sands industry isn't the only sector that must improve their technology to progress... You see, even the massive shale revolution taking place isn't without its drawbacks. But I've discovered a tiny company flying under Wall Street's radar that has the potential to change the game entirely. It all revolves around their specialized “petro-fracking” technology. Click here to learn all about it.