Why Investors Should Love the New Tesla Semitruck

You Won’t Believe What Tesla Just Did

The only time I ever go to Vegas is when I’m attending a conference or speaking at a finance event. And even then, I try to make those trips as short as possible.

The food sucks, it takes an hour to tunnel through the mazes of blackjack tables and slot machines to get to your hotel room, and during the summer, you take your life into your own hands when you attempt to walk more than 100 feet in that oppressive desert heat.

Unless you love to gamble — which I don’t — I see no reason to step foot in Nevada. Well, at least that’s how I used to feel.

I’ve never really been that interested in visiting Nevada...

But that doesn’t mean I won’t spend time there if I see an opportunity to make some money. And boy is Nevada quickly turning into a hub for some very profitable innovation. In fact, Nevada has quickly become a Mecca for those looking to make a ton of money by investing alongside Tesla CEO Elon Musk.

The truth is, nearly every project Elon Musk is working on is being developed in Nevada. In fact, last week we learned that Musk has been meeting with the Nevada Department of Motor Vehicles to test a new autonomous, electric semitruck.

According to an email obtained by Reuters, Tesla and the Nevada DMV are currently developing a long-haul electric semitruck that can drive itself and move in "platoons" that automatically follow a lead vehicle.

These trucks are expected to get about 600 miles on a single charge, and, of course, without the need for diesel or drivers, these trucks are going to prove to be one of the most disruptive technologies the world has ever seen.

Fuel and driver salaries make up about 65% of all trucking costs in the United States.

Can you imagine what the owner of a shipping company is thinking right now when he sees that very soon, he’ll be able to completely remove his diesel and salary costs from his spreadsheets?

This is a major game changer, to be sure. But it’s not the only thing Elon Musk has going in Nevada.

In addition to Tesla’s new semitruck, the company’s Gigafactory is located in Nevada, as is a test track for the Hyperloop — the high-speed rail alternative that Musk is also behind.

When fully operational, the Hyperloop will travel at speeds up to 600 miles per hour, taking commuters from New York to D.C. in the time it takes to watch an episode of Seinfeld... which you’ll likely be able to do in the comfort of your Hyperloop pod that may end up looking something like this: 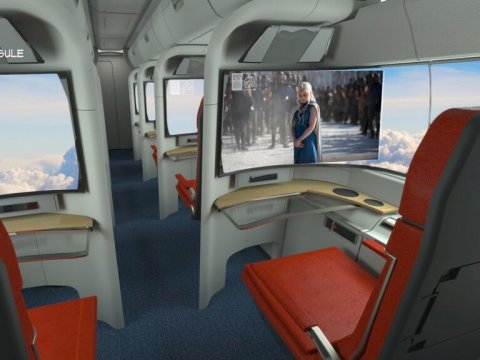 Make no mistake; Nevada is becoming a go-to spot for some of the most exciting and disruptive companies on the planet. But despite all the excitement over things like autonomous semitrucks and 600 mph high-speed commuter systems, there’s one thing in Nevada that’s delivering more profits for investors than anything else.

The Most Profitable Opportunity in Nevada

Four days later, the state had already generated more than $3 million in sales and about $500,000 in tax revenue. And investors have been cleaning up ever since.

If you’re a regular reader of these pages, you know I’m incredibly bullish on the legal cannabis market. And how could I not be? Since first getting into this space, I’ve landed nearly a dozen triple-digit gains. And these gains are getting bigger and bigger by the day.

In fact, with Nevada fully legal, we now have exposure to two cannabis stocks that have operations in Nevada. And they’re crushing it.

Of course, I wouldn’t recommend anyone invest in the legal cannabis space before watching my introduction to cannabis investing video, which you can watch here.

In this video, I explain why the legal cannabis industry is so profitable, how it’s expanding into other countries, and how you can identify which cannabis stocks are in line for the biggest gains.

I’ve also authored an e-book, which is essentially a beginner’s guide to legal cannabis investing. In that book, I list 46 legal cannabis stocks you can buy right now. Click here if you’d like to get a copy of this book.

The point is, Nevada is booming with opportunity. Whether it’s cutting-edge transportation technology or legal cannabis, Nevada is quickly becoming one of the most important places to be for investors. And as much as I hate the craziness that is Las Vegas, rest assured, nothing can keep me from the conga line of profits that’s coming out of the Silver State.