He’s never made it a secret.

Nor has his Secretary of State or National Security Advisory.

The current administration wants to wipe Iran off the face of the map. And while some restraint has been exercised recently, it won’t last.

Both sides smell blood, and both sides are willing to sacrifice plenty of blood and treasure if necessary.

Truth is, at this very moment, preparations are being made for every imaginable event — on both sides.

Cyber attacks, oil tanker explosions, infrastructure bombings — nothing is off the table, and something is going to happen.

Now, I don’t write these words to incite fear or applaud military action. I think it’s absurd that this country still thinks nation-building is a good idea. But my thoughts on this aren’t relevant. What is relevant is this...

Oil Prices Are Primed for a Major Move

Not that this should come as a surprise.

We all know what happens when instability rocks the Middle East, and oil traders are paying close attention. You should, too.

Although I’m not a big fan of the Big Oil machine, I’d be a fool to not make a few bucks on these big swings.

Personally, I like to capitalize on these swings with leveraged ETFs, which can be a bit risky if you’re not careful but can also be pretty rewarding.

Just look at this action from last week: 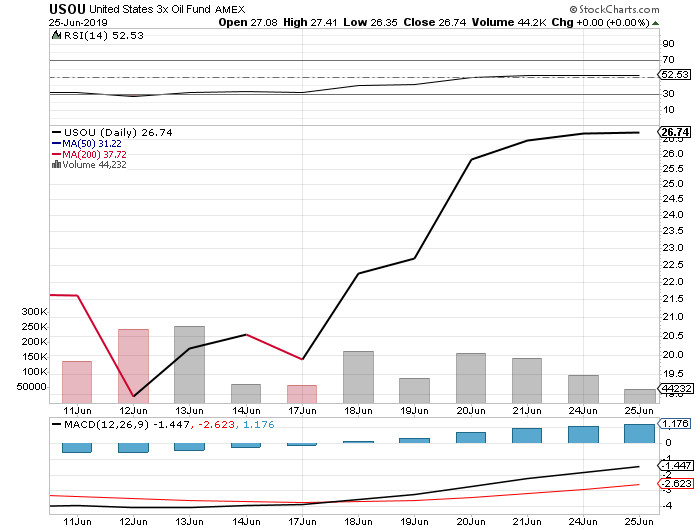 Now, full disclosure: I tend to rely a lot on my colleague Keith Kohl, who’s pretty much the most well-educated oil analyst I know. I’ve made a lot of money by taking his advice, so as you can imagine, when he tells me there’s a solid bull case for oil, I’m all over it.

That’s why I’m loading up the boat on his latest pick, which, thanks to these latest tensions with Iran, is crushing it. You can read more about this one here.

The bottom line is that some serious shit is about to go down with Iran. And as much as I hate to see this happen, I’d be lying if I said I wasn’t going to trade some oil stocks along the way.

And unless you hate money, you should get some of this action, too.