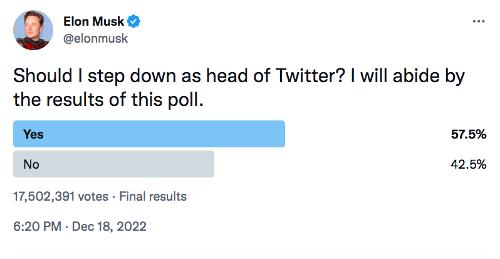 After “the people” voted, something very interesting happened.

The results of the poll showed more people wanted Musk to step down as CEO — and the market reacted.

While it’s obvious that a lot of folks on the left don’t particularly like Musk anymore due to his political leanings, it’s even more obvious that the market thinks his time spent at Twitter is a distraction from what he should be focusing on: one of the most successful investment opportunities of the 21st century, Tesla.

I know because I told folks to buy shares of Tesla after it went public.

And we all know how that turned out… 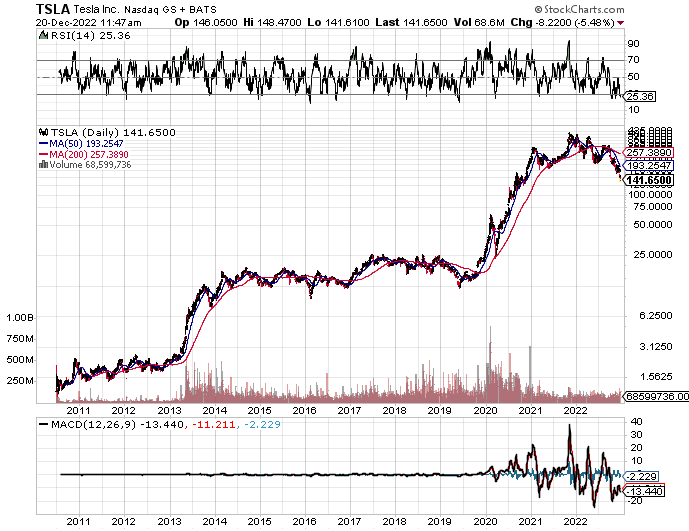 A one-time investment of $5,000 right after its IPO would’ve turned into more than $1 million.

That's a fact. And it’s not trivial.

And this is why I never understood why Musk even bothered with Twitter.

I thought it was a joke when he first talked about buying it, but apparently the SEC didn’t. I maintain that the only reason he went through with the sale was because he put himself in a position where if he didn’t follow through, regulators would have crucified him.

Don’t get me wrong: Twitter has never been a profitable venture, and I’m not sure its trajectory would’ve allowed it to either.

In order for Twitter to continue as one of the most important social media platforms in the world, it would ultimately have to make some major changes. And Musk was forced to make some tough decisions about the company's daily operations, debt obligations, and profitability strategy.

None of these things sat well with a lot of Twitter users, but those users also don’t have an obligation to turn the company into a profitable operation.

My point is simple…

Tesla has proven to be one of the most successful car companies in the world, and this is because of Elon Musk’s vision. Make no mistake: Had it not been for him, there would be no electric vehicle revolution today.

And this is, without a doubt, a revolution.

If you’re a regular reader of these pages, you know that in just eight years, more than 50% of all new cars sold in the U.S. will be electric.

To put that in perspective, only 4% of all new car sales in 2020 were electric. This represents a CAGR of about 29%.

There are few markets with more growth and profit potential than the electric vehicle market. So, yes, when people ask me if Elon Musk should focus more on Tesla and less on Twitter, there’s a valid reason for this.

Of course, when we talk of electric vehicles, there should also be no doubt about which sector of the market offers the most bang for your buck, and it’s not passenger vehicles.

I've said it before, and I’ll say it again…

If you want to get rich in the EV game, you have to own a piece of the electric bus sector.

As reported by Bloomberg, the advance of electric buses will not only exceed the growth rate of electric passenger cars, but in almost all charging configurations, electric buses have a lower total cost of ownership than conventional municipal buses.

And this is why I’m so bullish on this U.S.-based electric bus company that not only builds electric buses but also the batteries and infrastructure required to operate them.

In its most recent quarter, this company reported record quarterly revenue surpassing $96 million, representing growth of 55% year over year.

Its transit deliveries hit a new record of 60 new electric buses while its battery system deliveries grew 274% year over year.

It's also worth noting that its charging solutions segment grew 765% compared with Q3 2021, with customers in both the transit bus and non-transit bus commercial vehicle markets.

Without a doubt, if you’re looking to wet your beak in the electric vehicle space, there is no greater opportunity than this electric bus stock. In fact, I believe that those who buy shares today will be sitting on an easy double in less than a year — and that’s figuring conservatively.

You can learn more about my favorite electric bus stock here.