Who Will the Sea Obey?

“Let all men know how empty and worthless is the power of kings. For there is none worthy of the name but God, whom heaven, earth, and sea obey.”

Canute the Great started life as a Viking warrior and ended it as the king of England, Denmark, Norway, and part of Sweden. He was the son of Sweyn Forkbeard and the grandson of the famous Harald Bluetooth.

At one point, the king overheard his entourage bragging and saying the king could stop the tides. Henry of Huntingdon tells the archetypal tale of Canute:

When at the summit of his power, he [Canute] ordered a seat to be placed for him on the sea-shore when the tide was coming in; thus seated, he shouted to the flowing sea, “Thou, too, art subject to my command, as the land on which I am seated is mine; and no one has ever resisted my commands with impunity. I command you, then, not to flow over my land, nor presume to wet the feet and the robe of your lord.” The tide, however, continuing to rise as usual, dashed over his feet and legs without respect to his royal person. Then the king leaped backward, saying: “Let all men know how empty and worthless is the power of kings, for there is none worthy of the name, but He whom heaven, earth, and sea obey by eternal laws.”

The original tale was meant to portray a story regarding the limits of earthly powers. In modern times, people use it as a warning against arrogance.

Thirteen years ago, when President Obama won the Democratic nomination for president, he said, “This was the moment when the rise of the oceans began to slow and our planet began to heal."

He meant that global warming was melting glaciers, and he assumed he would enact laws that could turn it around.

Everyone wants to live on a clean planet, but they also want the lights to work and the heat to come on in winter.

Politicians seeking votes (and voters not understanding how electricity works) decided to shut down nuclear power in Germany, oil drilling in the North Sea, and coal mining just about everywhere.

Leaders around the world have announced plans to cut fossil fuel consumption and end emissions by 2025, 2030, or 2050.

The problem is that most of the world's electricity comes from fossil fuels, and if you take nuclear out of the equation, you're not left with many alternatives.

There are times when the wind doesn't blow and the sun doesn't shine. It is also difficult to move major rivers to where power is needed. There was a wind drought in the U.K. over the summer. In Scandinavia, there is a lack of rain that has dropped hydropower production, and the sun rarely shines in Germany.

Coal, on the other hand, is stored energy. You can pile it up in great heaps near your power plant and create electricity whenever you need it. Not that the elites care.  They have decided that coal, oil, gas, and nuclear power are out of fashion and should not be used. The peasants will suffer for sure — but the rich will have a home generator in most of their houses to cover the times when their solar power isn’t enough.

It is no wonder Generac (NYSE: GNRC), a company that makes home generators, is up 1,231% over the last five years.

Nor is it surprising that capex (the payment to purchase long-term physical or fixed assets) in the oil and gas sector has fallen dramatically. 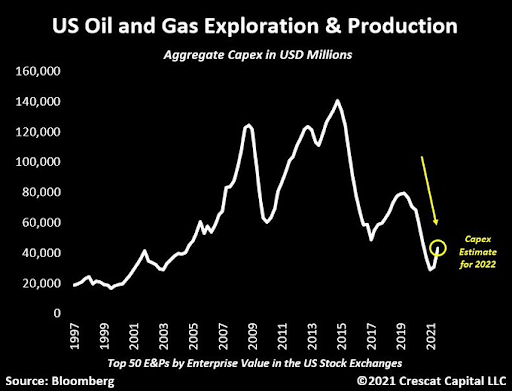 By the way, it takes many years and a lot of money to find and develop oil and gas fields.

Nor is it surprising that the price of gasoline, oil, and natural gas is rising rapidly. When the government actively works to shut you down, you tend not to take risks and spend money for possible gains down the road.

In the EU, the price of imported natural gas has gone from $4/MMBtu last year to $22.84/MMBtu today. In Maryland, I’ve locked in my electricity costs at $0.07 per kWh. In Germany, the price is $0.30 per kWh and heading higher.

Global leaders may set down their private planes near fancy beaches and command the water to stop rising. They will stamp documents, have summits, and produce research. “Tuvalu must be saved,” they’ll say. They will spend other people's money and order the Earth to cool down.

However, as Canute could have told them, the gods of energy and economics have a will of their own.