And Does it Really Matter?

Among those selected was Dr. Judy Shelton, a senior fellow and co-director of the Atlas Sound Money Project.

This collaboration works to raise awareness about and develop a set of resolutions for what its mission statement calls “the inherent problems of our current monetary system.”

Dr. Shelton first became recognized after she authored The Coming Soviet Crash in 1989. In this book, Shelton claimed that the Kremlin's finances were in much worse shape than generally thought and accurately predicted the collapse of the USSR — which occurred less than 24 months after the book was published.

In September 2015, Dr. Shelton published an article in the New York Sun titled “How a Gold-Backed Bond Could Open an Avenue To Monetary Reform.” In this article, she wrote:

For people who think it would be wise to start restoring the link between money and real value – and who believe the cost of capital should be decided by free-market forces rather than central bankers – it’s time to consider how we might begin to move toward a gold standard.

Dr. Shelton ultimately proposes the U.S. Treasury should issue gold-backed bonds that could be redeemed at maturity in either dollars or gold. She argues that:

...it [gold-backed bonds] would send an important signal that America recognizes the need to reverse the trend toward financialization of the economy in favor of encouraging genuinely productive output.

I personally really like Dr. Shelton's idea. But if the proposal is to use America's gold reserves as the backing for such bonds, there could a major roadblock in the way of such a plan...

And that's simply because the U.S. gold reserve stockpile has a bit of a liability attached to it.

Only very few Americans really understand this. But here's what happened...

Back in April 1933, Executive Order 6102 (otherwise knows as “gold confiscation”) required all Americans to turn in most forms of gold coins, other bullion, and gold certificates at the rate of 20.67 U.S. dollars (about USD$380 today) per ounce.

But they didn't turn their gold in to the U.S. government.

Executive Order 6102 required all Americans to turn in their gold to the Federal Reserve.

The point is, the U.S. government forced the American people to trade in their gold (the real money) to a private company in exchange for their money product (the U.S. dollar).

Afterwards, the Federal Reserve legally owned this gold — even though its original owners were forced to sell it or face a fine up to $10,000 (equivalent to over $180,000 today), up to 10 years in prison, or both. Pretty harsh punishment for owning a piece of metal, huh?

As a result of Executive Order 6102, the Federal Reserve was able to increase its gold holdings by over 200% to over 250 million ounces! That's more than 10% of all the gold ever mined to date!

But the Federal Reserve didn't own this physical gold for long.

Less than a year later, in January 1934, the Gold Reserve Act was passed, which required the Federal Reserve to surrender all of its gold and currently held gold certificates to the U.S. Treasury.

And this is exactly where the confusion over who really owns the U.S. gold reserve begins...

You see, the Gold Reserve Act of 1934 didn't force the Federal Reserve to hand over its gold for free.

The truth is, the Federal Reserve exchanged 20.67 of its U.S. dollar product for every 1 troy ounce. We could argue that it was not a good trade. But nevertheless, a trade did occur, and the Fed did not get the gold for free. So we really couldn't have expected them to turn it over for free to the U.S. Treasury.

But not only was the Federal Reserve extremely well compensated for its efforts...

Not only did it get the deal of a lifetime...

It may have secured a solid claim to the largest gold reserve on Earth, namely the U.S. gold reserves.

Here's what the original Gold Reserve Act of 1934 says:

Upon the approval of this Act all right, title, and interest, and every claim of the Federal Reserve Board, of every Federal Reserve bank, and of every Federal Reserve agent, in and to any and all gold coin and gold bullion shall pass to and are hereby vested in the United States; and in payment therefor credits in equivalent amounts in dollars are hereby established in the Treasury in the accounts authorized under the sixteenth paragraph of section 16 of the Federal Reserve Act, as heretofore and by this Act amended (U.S.C., title 12, sec. 467). Balances in such accounts shall be payable in gold certificates, which shall be in such form and in such denominations as the Secretary of the Treasury may determine.

And it still owns these to this very day.

The last fixed price for gold set under the official Bretton Woods system in the early 1970s was USD 42.22 per ounce. This $42.22 is the price the Federal Reserve uses to calculate the value of its gold certificate holdings. So let's do some math...

That's the entirety of what we call “U.S. gold reserves.”

The Federal Reserve claims it doesn't own any gold at all. In fact, here's a screenshot from its main website... 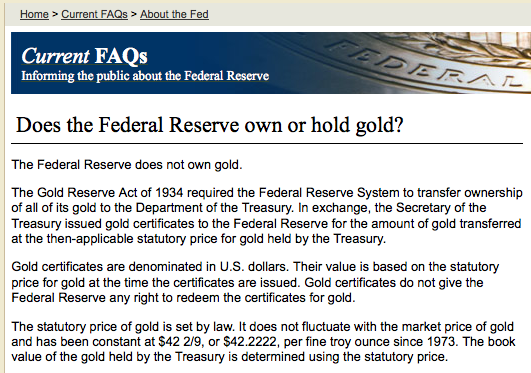 But the Federal Reserve has the entire book value (as per the last Bretton Woods fixed price) of what is supposedly the American public's gold in its balance sheet. This private company has the value of the U.S. gold reserves in its books.

So who the hell really owns the U.S. gold reserves?

I mean, you could rail against the Federal Reserve and the big banks about all this. And I'd support you in words. But you'd just end up losing time, money, and energy.

The Federal Reserve may have duped the American people decades ago. But the past is the past. And to quote the great comedian Lenny Bruce:

The truth is what is. And what should be is a fantasy — a terrible, terrible lie that someone gave to the people long ago.

Don't rely on promises made by politicians. Politicians are going to help themselves first.

Rely on yourself. Put yourself on a personal gold standard and own the physical metal today.