What the Hell Was OPEC Thinking?

What in the hell was OPEC thinking?

A good friend and longtime reader asked me this question years ago, on the day we learned that OPEC and Russia were teaming up to bring balance to the oil market.

I remember that day well.

It was a very chilly morning here in Charm City on December 10, 2016, with temps hitting as low as 25 degrees by the time I rolled into my office.

His was the first email in my inbox, and at first I’ll confess that I had absolutely no idea what he was talking about.

But it didn’t take long to realize that OPEC and Russia had reached their first production cut deal in 15 years.

The Saudis called it “historic.”

I called it “foolish.”

Today, my answer to that same question was simple.

Anyone with a dime in the oil sector at the time was feeling the pain. Between 2014 and 2016, the price of crude had plummeted nearly 75%.

More importantly, OPEC revenues had also fallen off sharply. In 2012, the oil cartel hauled in a record $1.19 trillion!

Something had to be done.

You can at least understand the position the Saudis were in, can’t you?

Without that vital oil money flowing into the Kingdom’s coffers, keeping up the lavish spending on social programs to placate its citizens became tougher.

We both know cutting any sort of production deal with the U.S. was impossible.

So OPEC made a deal with the devil.

And Russia was the perfect partner at the time. Russian oil output had climbed to around 10 million barrels per day by 2016, and it was the only producer on the planet (at the time) that could keep pace with the Saudis.

Granted, there were other factors at play behind the scenes.

You see, the Saudis dropped one helluva bombshell when Saudi Aramco released its base prospectus last April.

It was the first time the House of Saud admitted things weren’t going too well at the mighty Ghawar field. With the field data so closely guarded, everyone had just assumed the world’s largest oil field at the time was pumping out oil at a rate of 5 million barrels per day.

Now we know that was a lie.

The great Saudi oil dilemma had forced their hand.

And throughout that shaky partnership with Putin, one thing has become abundantly clear...

OPEC as we know it is dissolving right before our very eyes.

The True Winner in OPEC 2.0

Gone are the good old days for OPEC, when it could mutter a few lines to the media and watch oil prices soar higher.

If a decade ago we saw the news that’s taking place today, from oil tanker seizures to direct attacks on Saudi oil fields, oil prices would have surged over $100 per barrel.

And the cold, bitter pill to swallow is that OPEC has lost a step... maybe two.

Just look at its latest membership woes and you’ll see why.

After watching Qatar leave OPEC earlier this year, OPEC’s newest recruits are quite underwhelming: Equatorial Guinea and the Congo, which joined in 2017 and 2018. Together, the two countries produce around half a million barrels per day.

Malaysia was kicked out shortly after joining OPEC, although it won’t be missed too much considering it was a net oil importer!

The real teeth behind the OPEC+ production cut is Saudi Arabia and Russia, who account for roughly two-thirds of total oil output.

So when Russia decides to extract oil at a record pace — more than 11 million barrels per day currently — it’s the Saudis who have to adjust.

Despite record Russian output, the Saudis are set on keeping output below 10 million barrels per day — far below their official quota.

Make no mistake; they’re happy for it.

There’s no greater path to forgiveness for them than cash.

In 2018, OPEC saw its net oil revenues at their highest in five years. 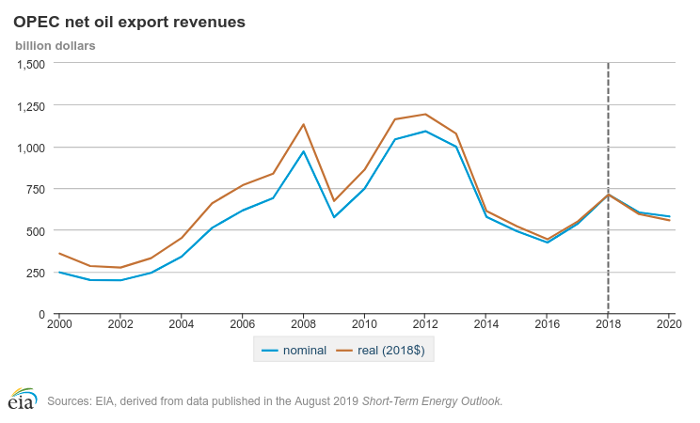 But there’s something even bigger at play here.

Even though the Saudis are taking one for the team now by bearing the brunt of the oil production cuts, they’re not stupid.

In fact, Saudi Arabia has been quietly moving itself in a perfect position to stay on top of the global oil hierarchy for decades to come.

And they don’t care who they have to backstab to do it.

I’ll tell you who they’re double-crossing next week.

Sour Oil, Heavy Profits
Energy and Capital editor Keith Kohl peels back the latest geopolitical chaos taking place over Iran and how investors can stay ahead of the herd.
The Great Saudi Oil Dilemma
Energy and Capital Keith Kohl uncovers one of the greatest fears coming true for Saudi Arabia, and reveals why Texas oil drillers are about to take full advantage of the situation.
OPEC 2.0 Is Here: Invest Accordingly
Energy and Capital editor Keith Kohl shows readers who the winners will be as OPEC as we know it dissolves. Here's the group that will constitute OPEC 2.0...
Hydrogen Fuel Cells: The Downfall of Tesla?
Lithium has been the front-runner in the battery technology market for years, but that is all coming to an end. Elon Musk is against them, but Jeff Bezos is investing heavily in them. Hydrogen Fuel Cells will turn the battery market upside down and we've discovered the tiny company that is going to make it happen.