A Look at Lithium Miners

If there’s one word that makes the Saudis shudder, it’s batteries.

Because every electric or hybrid vehicle sold in the United States — or anywhere, for that matter — means one less junky for them to peddle their wares.

Here in the States, the goal is to get one million electric vehicles on the road by 2015.

Research by Baum & Associates shows that’s easily possible, even in their conservative scenario: 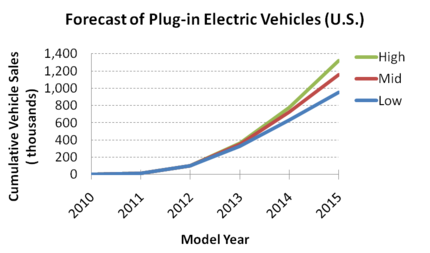 By then, the United States will account for only half the global market. Forecast firm Global Industry Analysts says the global EV market will reach 2.6 million units by the same year, as “technological breakthroughs have expanded the scope of electric vehicles considerably… and are expected to result in widespread acceptance of electric vehicles across mass markets.”

But with so many choices — hybrid electrics, plug-in hybrids, all electric, fuel cell electric — there’s only one sure place to invest…

Sure, major electric vehicle makers could’ve turned a pretty penny for you over the past two years. Toyota (NYSE: TM) is up about 50% in that time. Nissan’s (PK: NSANY) coming of age has thrust it to about 250% upside in the same time.

Most investors would grin at those gains.

But the truly wealthy ones sneer...

While Toyota and Nissan seem like obvious plays on EVs, they don’t really get to the heart of this bull market.

Any car company can make an EV. But there’s one thing they all need: batteries.

And right now, there’s only one material of choice for those batteries: lithium.

So while some investors were happy with 250% on Nissan, here’s what a few lithium miners returned in the same time:

Right now, global demand for lithium is about 110,000 metric tons.

But an inside source from an up-and-coming lithium miner says demand will double by 2020, and that “you could very easily see by 2020 the need to triple production or even more just to accommodate the auto sector.”

Prius to the Prius

In early 2010 — with little fanfare — Orocobre signed a deal with a Toyota affiliate partner “to develop a mine in Argentina that will provide raw materials for vehicles powered by lithium-ion batteries.”

You can imagine how much lithium a company like Toyota needs... Now, it’s going straight to the source to make sure it can get all it wants.

And with its access to immense reserves, Toyota thinks Orocobre is just the company to do it.

According to a Toyota official: “The size and quality of the deposit is world-class and we believe will produce high-purity, battery-grade materials required for the global battery industry at a cost that is competitive.”

Now, here’s the important part if you’re after 1,000%+ gains in the lithium market…

Construction on that mine (in Argentina, home to some of the world’s best lithium reserves) is slated to be finished in the first half of this year, and it’ll be operational by year’s end.

The stock has doubled since the announcement in January last year, but that’s only a fraction of what it’ll do when actual lithium starts to be produced...

With oil at $100 and headed higher, two things are happening:

1. Battery stocks are starting to rise as a hedge bet.

2. Demand will increase for electric vehicles, pushing stocks even higher

Getting in a pure play right now is the best bet you can make as this years-long bull market kicks into high gear.