Tiggre answers by speculating on how the world might look in an environment with $5,000 or $10,000 gold. As you might expect, he notes that such prices would be accompanied by high levels of economic, political, and social uncertainty –– which may have resulted in hyperinflation, stagflation, bullion scarcity, and perhaps even government confiscation.

Tiggre's general point is in that kind of environment, simply owning gold (even though it might be worth $10,000 an ounce) will not be enough. And that it's advisable to also own more tangible assets such as productive land or a durable business. I'll post a link to his editorial at the end here.

I think Tiggre is correct on all fronts. In an environment of hyperinflation, stagflation, bullion scarcity, government confiscation, etc., gold bullion would certainly be worth much more than it is today.

However, I don't think that being in that financial environment is necessarily a requirement for gold to reach several thousand dollars. In other words, the end of the world doesn't need to happen to get to $5,000 or $10,000 gold. Let me explain...

First, let's get basic: There are only two reasons anyone invests in gold. You either invest in gold to protect your wealth or to increase it. Either way, at the core of anyone's reasoning for gold investment is an expectation of the future –– it's speculating just like all other investments.

The short of my point is gold prices increase as the shit is on its way to the fan –– it doesn't have to have hit to see rising prices. We don't necessarily need to be experiencing hyperinflation, stagflation,...political/social unrest, etc. to see $10,000 gold. However, we would need to see wide expectations of a messy trajectory.

A lot of people in car accidents report a feeling of time slowing down during the event. Studies have shown this is a real feeling and associated with threatening situations. I've experienced this myself, so I can tell you firsthand the time slowing down part begins at the exact moment your brain calculates there's no way of avoiding this car accident. And if there was ever a time to double down on your car insurance, it's within that very brief window.

Point is, again, we don't have to have already experienced the crash to see gold prices rising in anticipation of it.

Also, it's worth noting that gold is an international commodity. And economic, political, and/or social issues in many of the other 190 countries around the world could drive prices much higher.

The United States is a significant consumer of gold... but just barely. America is the world's third-largest gold buyer. But it only represents about 6% of total consumption. The biggest consumers by far are China and India.

Together, China and India consume over 40% of the world's gold. Expectations of economic, political, or social unrest in those countries could lift domestic demand even higher and significantly lift prices.

For China alone to increase its gold consumption by only 20% would create demand equivalent to all of America's consumption.

The short of the point here is gold prices could head much higher with the same issues happening elsewhere around the world. They don't necessarily need to occur in the U.S.

There's a caveat to rapidly rising gold prices though...

No matter what happens, expectations will be overblown. And when the gold market takes off, it could eventually become overbought at $5,000, 10,000, or even higher, doesn't matter. At one point, we can expect a peak in prices –– and we can expect that peak will most likely be short-lived.

Gold bugs like to point out the gold bull market of the 1970s as an example of how fast and high gold can increase in the right (or wrong) environment. They like to tell you how gold increased from under $150 an ounce to $850 (nearly $3,000 inflation adjusted) in just three years. 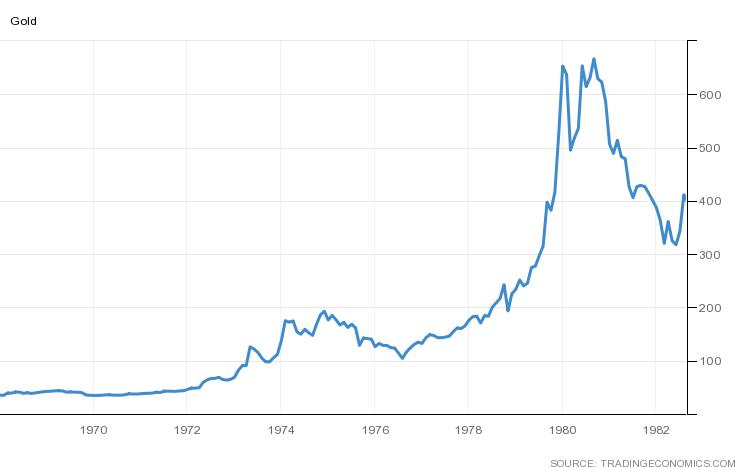 All that's true. But what they don't always tell you is that $850 peak was extremely short-lived. 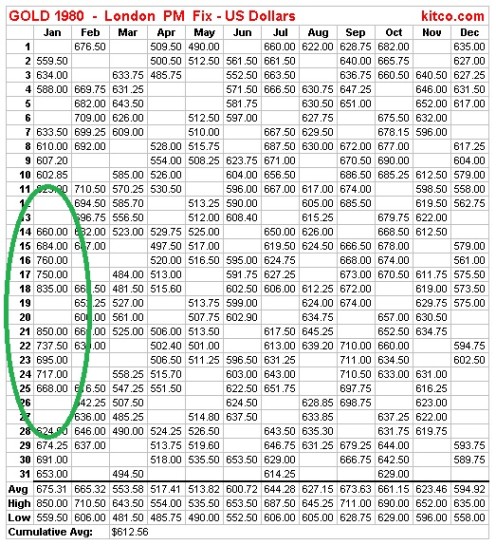 So the big finale of the greatest gold bull market in history (so far) lasted about as long as a long weekend. The average price of gold for the month of January 1980 was $675 an ounce. And in an environment like today’s, where we see rapidly rising gold prices again, I think we should expect the same. So even if gold does go to $10,000 an ounce, I wouldn't expect it to stay there long.

Well, it probably gets sold off and sent searching for a new price foundation.

Still, there's plenty of money to be made riding gold's momentum. We believe the price of gold is, in fact, headed to several thousand dollars in what I've already called a hyper-bull market. But we don't expect gold prices to increase sharply and simply stay there. We're not expecting a plateau. No, it's going to be a wild ride on which we'll need to be very active to maximize our profits.

No one ever said making money would be free or easy. You're probably going to have to put in some work to maximize your profit. However, we can make that work easier for you because we've already done all the research, almost literally spending a lifetime learning about the yellow metal.

Personally, I've been interested in gold since middle school. And I didn't grow up anywhere near a gold mine or the jewelry or pawn industry. My parents did nothing with gold other than wearing it as wedding bands. I don't know... I can't explain it, but I've been intrigued by gold for most of my life.

Professionally, I've been researching and writing about gold for over 15 years now. My colleague, Chris DeHaemer, has been in the game even longer (because he's an old fart). Combined, DeHaemer and I have been professionally studying the gold markets for over 40 years, and that's only between the two of us. We have a staff of in-house researchers at Angel Publishing that have dedicated large chunks of their careers to the gold and natural resource markets.

Based on our decades of experience, DeHaemer and I just finished putting together a report in which we single out three specific gold stocks we believe will be the absolute most profitable for investors over the next few months.

But that's just to get you started. DeHaemer and I are planning to go full throttle on gold and precious metal stocks over the next several months. And we'd love to have you join us. As I mentioned, you're probably going to have to put in some work to maximize the profits here. But we're talking about participating in what could easily shape up to be the greatest gold bull market in history.

This could truly be a once-in-a-lifetime opportunity for you, your family, your dog, etc. The upcoming gold bull market could be life changing. Don't miss out.