What Every Oil Investor Needs to Watch Right Now: Part 2

Oh, the havoc a tiny ship can wreak upon the market.

Well, perhaps it’s not such a small ship. The Ever Given is actually one of the longest ships in service today, with an overall length just shy of 400 meters.

And unless you’ve been living off the grid over the last week, I have no doubt you’ve watched the story of this behemoth wedging itself in the Suez Canal unfold.

If you’re like me, you weren’t so much concerned with how it got stuck in the first place. Until we get official word of how it happened, we’ll leave the speculation for the Twitter detectives.

No, we’re far more concerned with the fallout in the days, weeks, and even months down the road.

Before the ship became unstuck recently, the fear was that the canal would be blocked for weeks — even months under worst-case scenarios.

What this unfortunate event does do, however, is serve as a distraction from bigger catalysts in the global oil market.

Keep in mind that the Suez Canal plays a minor role in global crude supply. Only about 4% of all seaborne oil traded today, or approximately 1.74 million barrels, passes through the canal every day.

That’s hardly enough to upset the world’s supply/demand balance, especially when several major oil producers would jump at the chance to boost output now (more on that in a second).

Of course, this is also not to mention the fact that the Suez Canal can be bypassed entirely via the Sumed Pipeline, which you can see below: 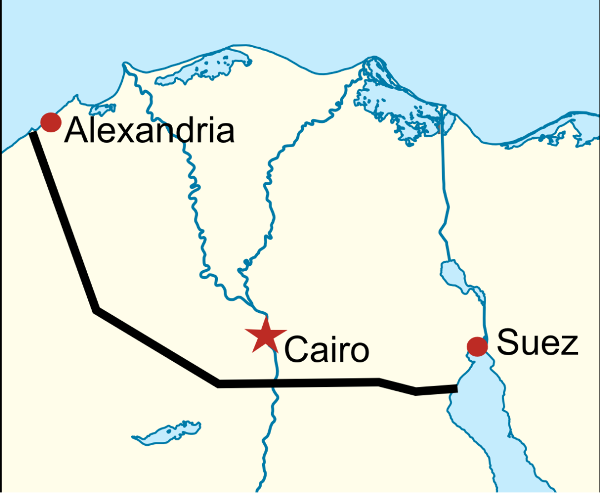 Last week, we talked about one of the largest catalysts for oil prices in 2021: the recovery of U.S. tight oil production.

Today, WTI prices are holding onto the $60-per-barrel threshold. Barring any dramatic weakness in prices, we’re going to see U.S. drillers slowly ramp up output — “slowly” being the key word.

Yet U.S. crude output is just part of the fundamental equation to which every investor — us included — should be paying close attention.

We also need to know how OPEC+ and, more importantly, the Saudis decide to act moving forward, and it’s clear that the Saudi crown is more than happy to keep crude prices around $60 per barrel.

And make no mistake, dear reader, any wild swings above $70 per barrel or below $50 would throw a wrench into the Saudis’ plans to balance this market.

Let’s say the Goldman Sachs prediction comes true and prices will soon reach $75 per barrel. In that scenario, every tight oil driller here in the United States will attempt to ramp up activity.

To be clear, the Saudis aren’t threatened by higher U.S. production — they just want it to be proportional to the post-COVID demand recovery.

On the flip side, every producer would feel the sting of lower revenues if crude prices tanked below $50 per barrel.

“So what should we be watching?” you ask?

As I mentioned, post-COVID demand recovery is the true signal for future prices.

OPEC+ is a little more optimistic in its outlook, believing that global demand will rise by 5.6 million barrels per day this year. However, I will also note that this is a downward revision from its previous estimates, thanks to renewed concerns over another round of lockdowns in Europe.

The question now is whether OPEC+ is optimistic enough to roll over its production cuts into May. We’ll stay tuned for that decision as the group’s meeting continues this week.

It’s a good bet it extends those production cuts too.

Both Russia and Saudi Arabia are in favor of that move, and the two are the powerhouse producers in that alliance.