Striking $420 Million Worth of Oil Every Day

Last month, a small tanker left the Turkish port of Ceyhan with nearly a million barrels of oil in its hull. The crude was pumped out of northern Iraq and then piped across the border into Turkey.

A few days ago, it was caught in the crosshairs of the U.S. Coast Guard off the coast of Florida. 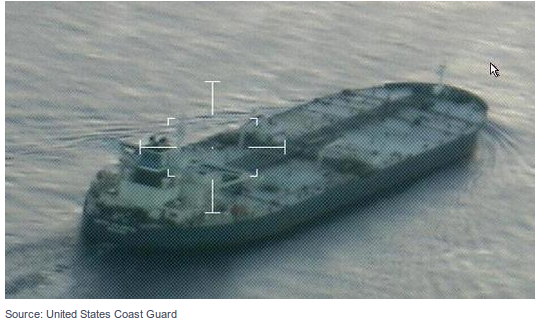 Twenty-four hours ago, the tanker finally dropped anchor at its destination: Galveston, Texas.

But as I mentioned yesterday, the United Kalavrvta's long journey from Kurdish oil fields to Texas refineries was nothing more than a symbolic event. It's a situation more apt for political theater because the U.S. certainly wasn't desperate for the crude cargo.

And there are a little more than a billion and a half reasons why...

Look, the entire market is aware of the oil boom taking place in North Dakota right now. But it was only recently that the Peace Garden State — now officially our second largest oil-producing state — joined the million-barrels-per-day club.

That's not too shabby considering less than a dozen oil fields in history have ever broken the million-barrels-per-day benchmark.

If things keep going the way they do, it's only a matter of time before North Dakota is producing more oil than Alaska and California combined!

But let's really put this domestic oil boom into perspective...

Together, North Dakota and Texas are now producing four million barrels per day.

With Western Texas Intermediate currently trading around $101 per barrel, that means these two states are generating in excess of $420 million every day!

Furthermore, at this rate, we're talking about more than a billion and a half barrels of oil every year. Of course, that's assuming production stays flat from here on out, which we both know isn't going to happen.

And even though the raging oil boom in North Dakota is practically old news right now (we're now watching the Bakken Shale enter its development stage), the next major Bakken-style boom could be around the corner.

Its success, however, hinges on one of the fathers of the U.S. shale boom... a man named Ellis White.

Over the last few weeks, I've mentioned the unprecedented success one oil pioneer has had in an emerging shale play that's only now starting to make headlines. And it's true that Ellis White has flustered some of the biggest operators in today's oil boom.

But how do you mask a 7 billion barrel oil resource?

That was the question I couldn't help but ask after first hearing about the massive oil play straddling Louisiana and Mississippi. The rumor is that industry insiders refer to it as Ellis White's hidden oil field.

Well, let me tell you exactly how...

The reason this emerging shale play was relatively untouched during the early years of the shale boom was because so much attention was fixated on a massive gas field located just a little bit to the northwest.

I'm sure you've heard of the Haynesville Shale before. We first started covering the Haynesville play years ago, when some of the early drillers in the Haynesville, like Chesapeake Energy, were still making a name for themselves in the U.S. shale patch.

Unfortunately, you and I both know how this story played out. After natural gas prices plummeted, so did drilling activity in the Haynesville, and the entire area became anathema for oil and gas drillers.

However, that is about to change.

One of the most lucrative investment periods is during the early stages of a new oil play, when smaller players hit the oil jackpot.

In fact, that's already happened for Ellis. He hasn't just beat Big Oil since the beginning of the year — he's pummeled them. 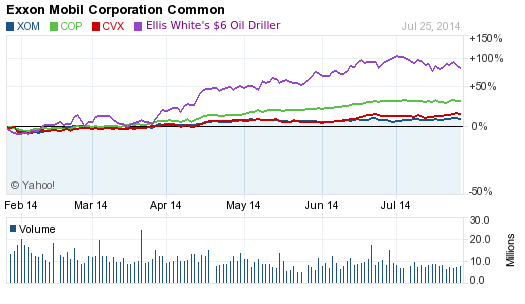 Thing is, outperforming behemoths like ExxonMobil is almost expected nowadays. And I've seen this oil pioneer turn unknown tracts of land into the most prominent oil-producing plays in the Lower 48. He did it in South Texas, and now he's about to do it all over again.

And it's only going to get better from here on out. Right now, he's at the helm of a tiny $6 driller, which — as you can see from the chart above — is drastically outperforming the biggest names in the industry.