Investors have focused so much of their attention on U.S. shale gas plays — namely the massive Marcellus and Haynesville formations — that the latest report out of Canada flew right by their radar.

After all, our shale gas production has soared over the last several years. And you can clearly see the EIA's feelings on the subject: 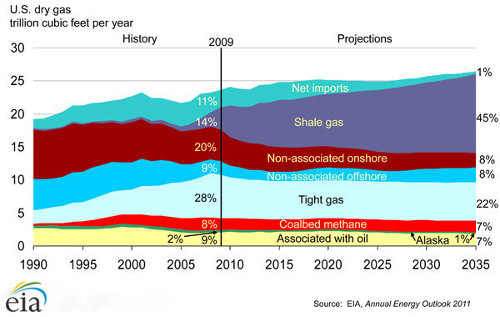 By 2035, shale gas is projected to make up 45% of our natural gas production.

This won't be the last time you hear us say this. These shale gas plays will dominate North American gas production.

Now, there's even more reason to believe as much...

Last month, Canada's National Energy Board (NEB) released its report on the shale gas potential in the Horn River Basin.

Located in Northeast British Columbia, I distinctly remember being laughed at for even broaching the subject five years ago.

It turns out there are approximately 78 trillion cubic feet of natural gas locked away in the shale — more than double previous estimates. High-case estimates reach nearly 96 Tcf of unconventional gas resources.

Granted, we've known for years that this little-talked-about BC gas play held a lot of shale gas. But validation is always welcomed.

Still trying to invest in Canadian energy? Look no further than Kitimat...

The Secret of Kitimat 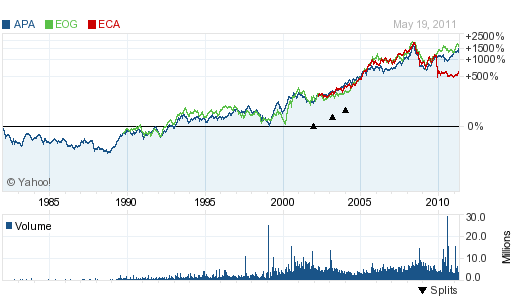 Building the Kitimat LNG facility puts them in a perfect position to take advantage of Canada's best up-coming natural gas plays — like the Horn River Basin.

The initial phase of the project will have a planned capacity of 5 million metric tonnes per year, or roughly 700 million cubic feet per day.

Capacity is expected to double to 10 million metric tons per year from future expansion plans.

P.S. Below, you'll find some of this week's best investment stories from the pages of Energy and Capital and our sister publications.

The Next Stage of the U.S. Shale Boom: Beyond Hydraulic Fracturing
Within the last five years, shale fever has gripped the United States. Meanwhile, hydraulic fracturing has come under fire lately... Now, producers are looking for an easier, more environmentally-friendly alternative to blasting the shale formations with water — and they may have finally found their answer.

Breaking Away from Fossil Fuels: The New Energy Dynamic
In his latest investment report, editor Luke Burgess offers investors a look into one of the biggest energy investment of the decade will help us break away from our addiction to oil, coal, and natural gas.

Food Crisis Stocks 2011: A Big Buy Opportunity is Setting Up Here
Editor Ian Cooper takes a look at just how severely food prices could rise, given recent floods and a stark warning from a prominent CEO.

Into the Heart of Darkness: Seeking Oil Profits
Editor Chris DeHaemer writes from Kenya, detailing for readers a trip dedicated to the search for the last great oil reserves on the planet.

Big Oil Welfare: Urgent: They're Stealing Your Tax Dollars!
Editor Jeff Siegel discusses how Washington is betting on the wrong horse with your tax dollars.

Inflation Will Cut Your Bank Account in Half: Why the Phone Doesn't Ring in Quincy Anymore
It's all robbery, whether it's copper in Quincy or dollars in Washington.

The Psychopaths in Power: The Richest 1% Own 35% of the Wealth
Why is it that 85% of us (Americans) make less than $100k a year while others rake in six or seven figures or more? And how do you go from the former to the latter?

The New Fort Knox: China Will Overtake the World as #1 Gold Holder
If you think the recent, highly-publicized gold-buying mania is merely the result of a handful of panicking investors, urged along by a couple contrarian billionaire types... think again. Today, it's no longer just private individuals buying up the yellow metal.

Rare Earth Uses Still Growing: From Missiles to the Planes that Drop Them
The more research done on metals, the more uses we're finding: missile guidance systems, super strong and light alloys, magnets, wave tubes, neutron reflectors, and other devices that keep you safe and make your life easier without you knowing it.