Weekend: 5 Drilling Stocks to Own Before Summer

At first glance, the news didn't appear too positive. This week, the number of rotary rigs drilling in the United States declined by eighteen. The total number of rigs drilling for oil and gas is 1721.

The uptrend is clear, and the opportunities are still open for investors... 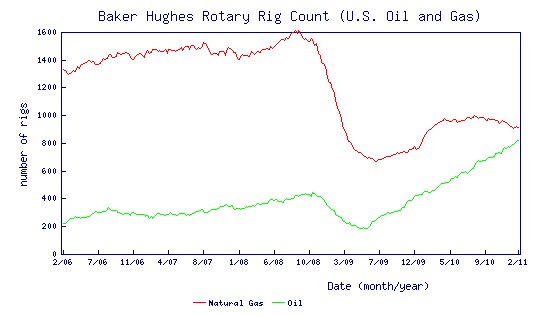 As you can expect, the number of rigs took a serious hit when the market took a nosedive during the latter half of 2008.

Notice how the natural gas supply glut has taken its toll, too.

For the first time in 18 years, the number of rigs drilling for oil threatens to outnumber those for natural gas. Not since December 17, 1993, has there been more oil rigs.

And that number will continue to grow — especially if crude prices average about $90-$95 per barrel in 2011.

Last week, I shared with you five shale stocks that are crushing the supermajors.

You also might want to think twice before assuming that shale drilling will slow down in 2011. The number of horizontal rigs operating in those formations has jumped 47% over the last year.

Here are five more drillers worth a second look: 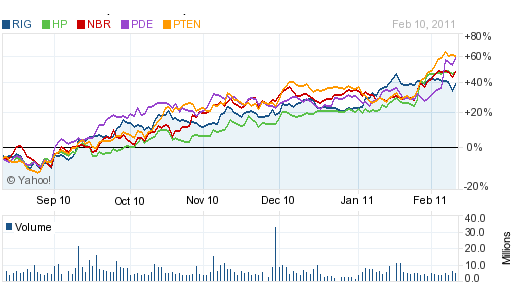 Two years ago, energy investors were in a win-win situation.

Many companies — and oil producers specifically — were trading at 52-week lows. All you had to do was write down a few names, tape them to a wall, and blindly throw a few darts to make your pick...

Unfortunately, it's not that simple today.

If you're not sure where to look, here are some of the top stories that have crossed my desk during the past week:

The Future of Fracking: The Next Step for Shale Production
While the debate over hydraulic fracturing rages, one company is stands to change the game forever... and it's still flying under Wall Street's radar. Using their revolutionary technology known as “petro-fracking,” this outfit is about to take America's shale industry to the next level.

We Just Witnessed the Impossible: Profit from the Brand-New Reality of Sunless Solar
Solar power at night? This small energy stock has perfected what the skeptics dismissed as fantasy... And the best part is that it's 300% more efficient that rooftop solar panels. Read the report that started it all.

Chinese Picks and Shovels: Feeding the Resource Beast
Editor Nick Hodge tries to convey just how fast China is growing, the resources it needs to do it, and how you can profit.

Profit from G.W.'s Sudan Peace: The Next Big Oil Boom
Editor Chris DeHaemer discusses oil production in Sudan and why East African oil companies are on his watch list.

An Egyptian Firebrand Away from $400 Oil: The Last Time Oil Quadrupled...
Editor Chris DeHaemer discusses the political situation in the Middle East, and what it means for the West... and the price of oil.

How Gold Could Save America from Nazi Theory: Keynesian Economics 101
Analyst Greg McCoach explores Keynesian economics with investors, and tells readers how the financial school of thought is destroying many of the world's economies today.

Dividend Reinvestment Plans: Using the Power of Compounding to Build Great Wealth
Editor Steve Christ explains how dividend reinvestment plans and the power of compounding are the key to your retirement blueprint.

Shale Gas Potential: The Wilt Chamberlain of Frackin'
Editor Nick Hodge discusses the rebirth of the Pickens Plan thanks to copious amounts of shale gas and improved ways to drill for it.