Watch: Solar Fields Forever — Get in on the Ground Floor

You may not realize it with the surge in oil and gas stocks recently, but there's another sector of the energy market you need to be a part of.

It's the booming solar energy sector.

That's just the tip of the iceberg.

According to the U.S. Energy Information Administration (EIA), approximately 70–80 gigawatts of new wind and solar photovoltaic capacity is expected to be added from 2018–2022, requiring $100–$150 billion of capital to build and develop. Moreover, Goldman Sachs states its data indicates more than 200 gigawatts of renewable energy projects will be installed between 2017 and 2030, requiring $360 billion of capital expenditure.

That's a lot of money... which is why I drove out to the Friendship Solar Farm in West Friendship, Maryland, to record a special video alert explaining why the solar energy sector looks so lucrative right now and how you can invest in the best companies in this space.

Your short, six-minute video alert is below: 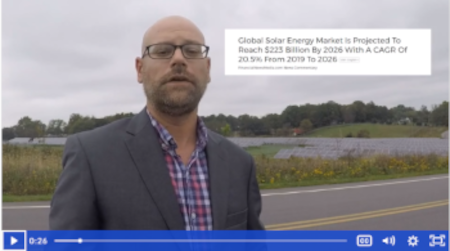 Have a great weekend. We'll talk again next week.