In a recent article entitled, “The Race for Arctic Oil Is Heating Up,” the first line reads:

Despite climate concerns and environmentalist backlash against exploration for oil and gas in pristine sensitive regions of the Arctic, companies continue to explore for hydrocarbon resources in the Arctic Circle, in Russia and Norway in particular.

Whenever something starts with, “Despite climate concerns and environmental backlash,” you know it can’t be good.

And what makes this particularly frustrating is that in another 20 years, electric vehicles will dominate new car sales compared to internal combustion vehicles. It just doesn’t make sense.

According to Bloomberg, electric vehicles will take up 57% of global passenger car sales by 2040, and electric buses are set to hold 81% of municipal bus sales by the same year.

We do know that the days of internal combustion are numbered. So why does the Big Oil machine find it necessary to continue to gut the planet in an effort to access more oil resources?

Well, it’s simple: Despite a future that will not be kind to internal combustion, the demand for oil will continue for the foreseeable future. Even if more than half of all new car sales will be electric in 20 years, at least 40% will still be internal combustion.

Still, there’s no denying that the transition away from internal combustion has begun.

The question, however, is: How will this transition away from internal combustion affect energy investors?

The Future of Transportation Has Arrived

We know that there’s money to be made in electric vehicles.

You needn’t look any further than the one stock that drives internal combustion loyalists and eager shorts absolutely crazy.

And while the future of the automobile industry cannot be determined by a single company, to deny that Tesla (NASDAQ: TSLA) has changed the game would be foolish.

Yes, if you went long on Tesla after it first went public, you’re sitting on massive gains... 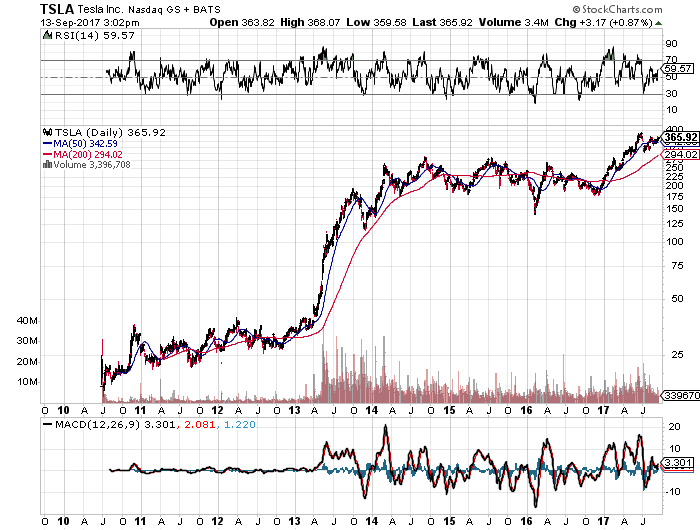 But outside of the stock market, what has Tesla really done?

Well, when Tesla first went public, the company and its CEO were viciously mocked.

Antiquated automobile CEOs, especially, launched insults every chance they had.

But here we are, 10 years later, and now every major automobile maker on the planet either has electric cars on the road or in development.

Other companies and organizations getting on board with electric vehicles include:

To be honest, when people say things like, “electric cars are too expensive,” or “the ranges are too short,” or “they’ll never catch on,” I just laugh.

The future of transportation is unfolding right before our eyes.

And if you don’t see it, you’re not paying attention.

But if you are paying attention, and you do see it, you would be wise to invest accordingly.