That's the current total market cap for the entire cryptocurrency space as it stands Thursday, February 3. Having taken only 20 years to reach this level, I'd say it's the most amazing growth story of my generation. The most well-known crypto story is Bitcoin's (BTC).

When Bitcoin debuted on the market on July 10, 2010, at a price of $0.0008, it seemed little more than a novelty for tech enthusiasts. It also got a bad rap because it was associated with illegal activity. And some people — particularly folks on Wall Street — called it a pyramid scheme.

The value of a bitcoin was a small fraction of a cent, and few people had any clue what this new thing called a cryptocurrency was all about. And even fewer folks appreciated the underlying blockchain technology or the decentralized financial environment it created.

But the idea spread — and kept spreading. Bitcoin excited a lot of people because it gave them a way to do this thing called “money” and earn wealth in such a way that didn’t involve central bankers, physical access to cash, or precious metals like gold and silver. After all, the crime argument is baseless and by its logic we should also ban the U.S. dollar. After all, the U.S. dollar is the most sought-after currency that people steal or commit crimes to earn. Should we outlaw cash? Of course not. The whole premise is silly.

As for a pyramid scheme? I would say given the scrutiny cryptos like Bitcoin, Ethereum (ETH), and other popular coins have received from powerful government entities like the SEC and central banks across the world, this is impossible to prove. Otherwise, some pen pusher in Washington or Frankfurt or London would have noticed by now.

So why am I talking about all this while the Nasdaq sinks today, thanks to Meta's (formerly Facebook) recent debacle of an earnings report and one of the worst months for stocks on record?

Well, because once again, we have a situation where gold was supposed to shine, and instead it's once again down below the all-important $1,800 mark. Even worse, the continuous contracts on the yellow metal just saw their 50-day moving average fall below the 200-day, which is a bearish sign.

This is all happening while inflation is at its highest levels in decades, the tech trade is waning due to rate hike concerns, and there's widespread fear that a recession could hit the economy if the Fed doesn't play its hand perfectly. If gold can't break above $2,000 under these conditions, will it ever again?

You''ll also get our free report, The Complete Guide to Non-Fungible Tokens (NFTs), sent straight to your inbox.

Meanwhile, Bitcoin, after gaining nearly 50% in value in 2021, is holding strong at support. Moreover, despite the volatility associated with BTC, it was still one of your best investments last year. The S&P 500 returned 29%, the Nasdaq did almost as well, and the Dow and the small caps did about half that. Big tech names like Facebook (NASDAQ: FB), Apple (NASDAQ: AAPL), Amazon (NASDAQ: AMZN), Microsoft (NASDAQ: MSFT), and Google (NASDAQ: GOOG) went up an average of 37% in 2021. Despite record years, these gains still don't beat BTC's 2021 returns.

More importantly, looking at the charts, Bitcoin appears to be gearing up for a new breakout as it consolidates in its current range between $32,000 and $36,000. 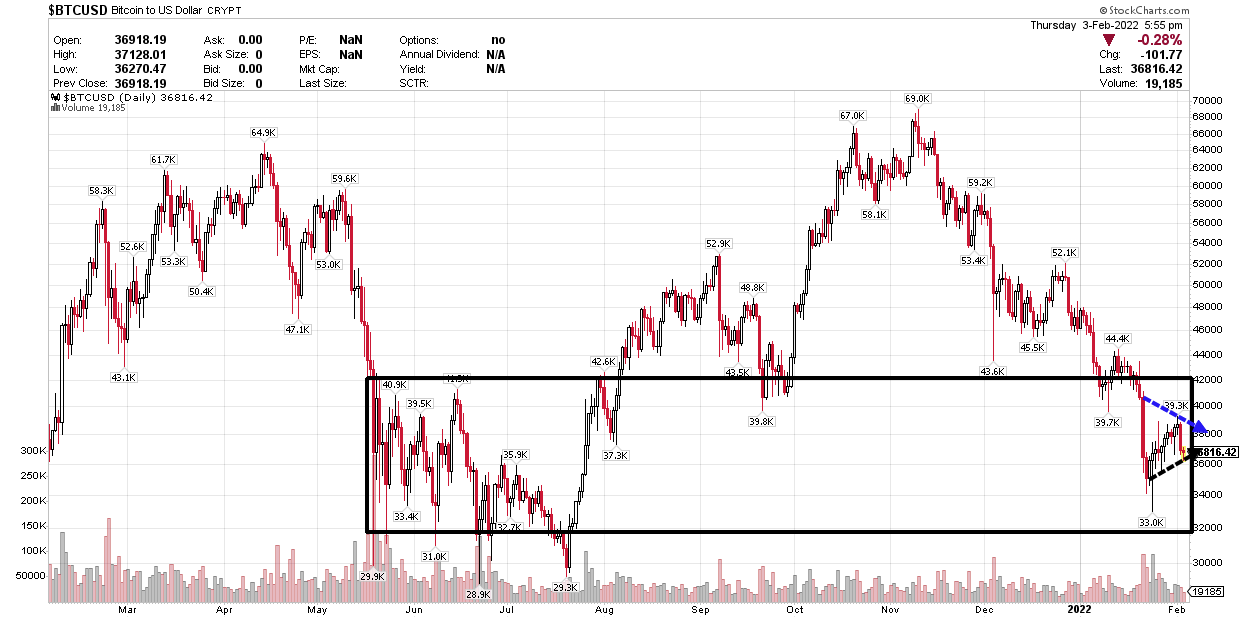 We tested these levels back last summer, right before BTC, ETH, and numerous other coins skyrocketed to new all-time highs. History doesn't repeat itself, but it sure does rhyme... Meaning we may not hit new highs immediately this year, but after another few weeks of consolidation, I expect a big surge for BTC and the rest of the crypto landscape.

The cryptocurrency market is about to EXPLODE in value, and that explosion will extend well beyond Bitcoin or Ethereum.

The future of crypto and quite possibly the future of all global wealth lies with a revolutionary crop of brand-new cryptocurrencies — particularly these six. Each one has the potential to turn an investment of less than $1,000 into literal MILLIONS of dollars. And I’m about to share everything you need to know about these revolutionary new cryptos. Two of these are already up 120% and 98% respectively since my colleague recommended them to his followers last August.

As the market matures, even more exponential growth is all but guaranteed. Why? Fewer than 1% of all adults own any cryptocurrency. There's still a ton of room to grow.

Think about it: The total market cap of the cryptocurrency market is $1.7 trillion. That's only the size of Apple (NASDAQ: AAPL).

In contrast, the total value of the U.S. stock market in 2020 was $93 trillion. I won't be so bold as to say you can slap a 50x multiplier to the crypto space this year, but over the next 10–20 years, I certainly could see the crypto space growing into this outsized valuation.

In part, because billionaires like Mark Cuban, Ray Dalio, and Marc Andreessen, as well as big money institutions, goverments, and the mass of retail investors keep pouring their fortunes into crypto. And these are the six cryptocurrencies we like most today.