On Saturday night, I awoke to find myself in the middle of a riot.

Like many other cities across the nation, there had been protesting and marching throughout Baltimore over the killing of George Floyd over the weekend. From my downtown apartment, I watched peaceful marching all day on Saturday accompanied by the standard fare of chanting, loudspeakers, and homemade poster board signs.

Protests and marching for causes are common in Baltimore. Living downtown for the better part of a decade, I see about three or four marches per year during the warmer months. The city has a planned route for approved marching or protests. I'm not privy to the details of the plan, but every sanctioned protest or march takes the same street path through Baltimore's downtown area. And Saturday's was no different.

Later that evening around 11 p.m., I was dozing off watching a movie when I started to see flashes of white light shine in the window.

Then there was a low rumbling, the sound getting louder as it got closer. A helicopter. The light flashing in my apartment, its spotlight.

Then, angry yelling comes from outside on the streets. It also begins to get louder sounding as if approaching. I sat up on the couch and blinked my eyes to wake myself up. Smash!

From outside, I know that sound, I've heard it before. That's the sound of a trashcan being thrown in the street and bottles cracking on the asphalt. I stood up wondering what the hell is going on and looked out the window.

There I saw 200 or 300 hundred people walking down the middle of the street, kicking over more trashcans, spray-painting walls, smashing windows, and yelling at the police cars behind them.

I grabbed a pair of binoculars and immediately realized the peaceful protesters earlier that day had turned sour.

Though some had masks on, it was dark, and I was pretty far away, I could see many of their faces with the binoculars. Some were clearly there just as spectators, filming the action with their phones or taking pictures with each other. Others were smashing shit up.

I walked out of my apartment and went into a stairwell for a moment for a closer look... 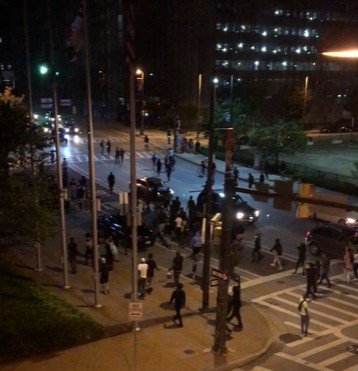 It was a dispersed mob, moving like a wave with a central group of the most destructive in the middle, capped on both ends by leaders and stragglers. The mob was being followed by what I swear was every police car in Baltimore City and all of their vans and SWAT trucks.

I was thankful at this point to watch them going past my apartment building and not congregating around it. The mob then turned a corner which I couldn't see around, followed by the parade of police cars, fire trucks, ambulances, and other emergency vehicles.

The sound of the helicopter faded off. That's when I saw I had a billion unanswered texts from friends and family asking if I was okay. I sat back on the couch and began texting everyone back.

The flashes coming through the window come back.

Then the sound of the helicopter again as I look to see the first leaders of the mob coming one more from a different direction this time.

And now they've seemed to take an interest in the bank building right across the street.

As 150 people or so crowded around the building, one threw a rock or something at a ground-floor window. Then another rock was thrown, and another. Then people began trying to kick in the doors. Smash! They got through the glass window when about 30 people then went into the building throwing computers, papers, and boxes out.

They were only in there for a few minutes before all running out. That's when smoke started to come out of the front windows and doors. Someone had clearly started a fire inside.

Within minutes police, SWAT trucks, firetrucks, and ambulances surrounded the building. An armored police vehicle parked on the corner and fatigue-wearing men with large guns poured out like it was a clown car.

Moments later the mob started to come back.

And now they were looking for a fight with the police.

Some were yelling at officers while a few others were throwing things. One guy lit what looked like a newspaper on fire and put it behind the rear wheel of the armored police vehicle parked on the corner — presumably trying to set it on fire. It was, nevertheless, a poor attempt. And the driver immediately moved the vehicle away from the fire.

The guys in fatigue ran out of the building. I'm assuming to chase the guy down.

Eventually the police chased the mob off, took care of whatever was causing the smoke coming out of the building, and seemingly secured the area. Three firetrucks, a fourth fire vehicle, and an ambulance stuck around for a while as the police and helicopters went back to following the mob.

By 3 a.m., the city downtown was quiet again. I looked back to the streets. There was trash everywhere, broken windows, spray-painted walls, puddling of water from firetrucks –– scars of a social battlefield. 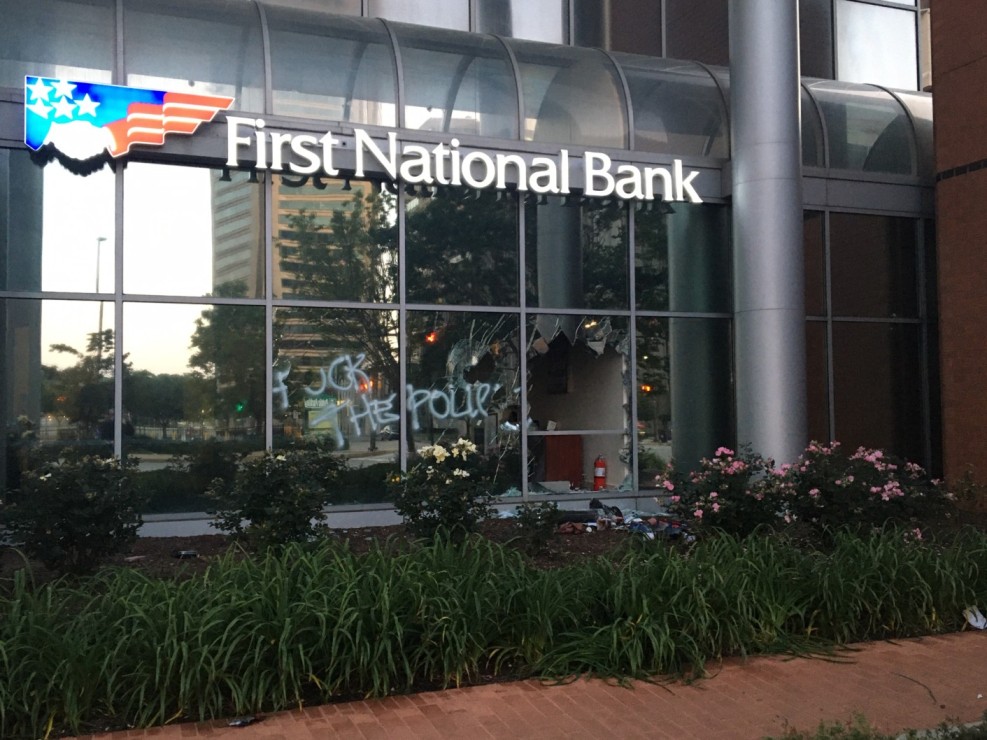 Reflecting on watching this whole thing play out live in front of me, I still recognize the importance of protest –– even violent and destructive protest sometimes. The American Revolution was, for all intents and purposes, a violent protest which ended up creating the greatest nation ever known.

Whether or not destruction as the protest was justified by the killing of George Floyd, I don't know. But what I'm absolutely sure of is destruction for its own sake (at least destruction of other people's property) is never justified.

As I mentioned, with the binoculars I could see many of the protester's faces. But what I saw there wasn't anger. Yes, some were angrily yelling at the police. But for the most part there was jubilation. It was almost a party atmosphere –– like a street festival where everyone's freaking out on meth.

Sure, there's joy in triumph. But that wasn't the type of joy these protesters seem to be sharing. It didn't seem like the type of joy shared by a group when the home team is winning or when the good guy in the movie saves the day and gets the girl. Instead, it seemed to be the joy of destruction itself.

Don't get me wrong, destruction can be awesome. Whether it's watching a large building being professionally taken down or a demolition derby, seeing things go boom is great. It's pretty near the premise of every action movie ever. Destroying property you own for fun can be great. But, of course, the key is you've got to own it.

As I said, I don't know whether or not destruction as a protest was justified by the killing of George Floyd. That kind of social philosophy is above my pay grade. But destroying other people's property just for the fun of it is just undeniably wrong. And after seeing it with my own eyes I think we're right to criticize many of those who participated in Saturday night's events.

The point of protest changes is to demand better. Including people who just want to take advantage of an opportunity to destroy significantly devalues the message of any protest. If protests want better results, they need better protesters. Otherwise, nothing ever will change and society will just be stuck in a never-ending cycle of damage caused by protests.