The sun hadn't even tipped the horizon when I pulled into the parking spot outside my office this morning. And while I was still fidgeting with my keys, I noticed something peculiar...

The door was wide open.

At first, I thought someone had tipped back one too many Natty Bohs the night before and left the place unlocked.

But that wasn't the case.

I wasn't the first to arrive at the office this morning. My colleague Ian Cooper was at his desk with a chart on his screen, furiously scribbling notes down on a thick yellow notepad.

There was something else I noticed when passing by his desk: He was in a fit of laughter.

The moment he mentioned Chavez, I knew why he was so happy.

We'll sell to whoever we want. We don't need money from gringos... The imperialists can go to hell. They mean nothing to us.

The outlandish statement was made after the United States imposed sanctions on PDVSA for sending gasoline and other oil products to Iran.

Although such rhetoric is reserved for Hugo (his reference to George Bush as "the devil" comes to mind), there's a good reason the fiery line didn't pass over his lips.

Instead, Hugo went the route of making empty threats — that is, to cut off oil shipments to the United States.

To understand why his threats hold no weight, we must first understand how desperate Venezuela's oil industry has become.

The real oil wealth, however, is in the nation's heavy oil deposits, found mostly in the Orinoco Belt. To their credit, at least they have a lot of it — there's about 1.2 trillion barrels of extra heavy crude in the area.

Now, we're not talking about the light, sweet crude like WTI. Far from it, actually...

Most of Venezuela's oil is heavy under 200 API gravity and has a high sulfur content. In other words, it's not as easy to refine as the Texas tea we're used to.

Aside from its size, the news doesn't get much better. Production has been declining since Chavez took office: 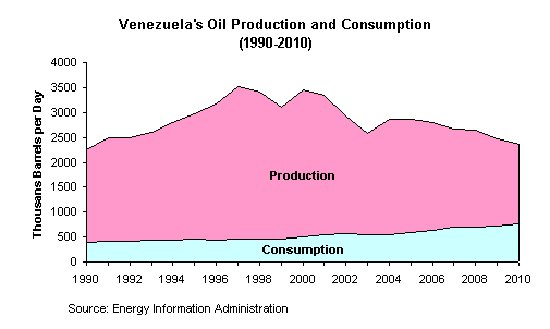 But the trouble here isn't finding oil — it's developing it.

Based on EIA estimates, PDVSA must spend $3 billion each year just to maintain current production levels. Many of Venezuela's 15,000 active oil wells are old, some with annual decline rates in excess of 25%.

According to Baker Hughes' rig data, there were 120 rigs drilling for oil in Venezuela in 1998. By 2010, that number had dwindled to 81. (To put that in perspective, there are approximately 173 total rigs in North Dakota alone.)

Within the last decade, there have been absolutely no refinery or infrastructure additions. The country spent $10 billion last year, and still wasn't able to increase production. Power blackouts have been commonplace in the headlines, with two major outages within the last two months.

Simply put, there's a serious lack of investment in the country's energy production.

All Bark and No Bite

So why are Venezuela's oil minister's threats empty?

The fact is they need us more than we need them, and that gap is growing wider with each passing day.

As you can see below, we've been slowly weaning ourselves from Venezuelan oil:

Can they really afford to lose us as a customer?

About 43% of Venezuela's crude went to the United States in 2010, making Uncle Sam far and away their most valued customer. Their low-quality sour crude can't possibly compete with Saudi product. 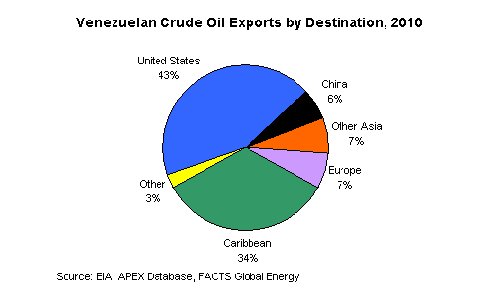 Besides, it's only a matter of time before their lack of investment drops production below the one million barrels per day they send our way.

I know why Ian can't help but love Hugo.

The two of us have a tendency to sling energy plays back and forth to each other throughout the day. On more than one occasion, they've directly put gains in my readers' hands. And this morning, things reached whole new level...

When I mentioned the possibility of Chavez cutting exports to the U.S., Ian laughed even harder.

He had an tell-tale grin on his face, and I knew right away he had something up his sleeve.

“If that happened tomorrow,” he declared, watching me pick up the phone, “here's a small U.S. energy stock that'll explode overnight. These guys are drilling in a place the U.S. can use to fill that demand gap.”

“The best part,” he continued, “is that they aren't even drilling for oil...”

A few minutes and several questions later, I was on the phone with my broker.

There's no way I'm about to miss this opportunity.

Oil Price Outlook: Correction or Crash?
Energy and Capital Editor Keith Kohl details Congress' latest attempt to expand offshore oil production and how to play their gas pump politics.
Obama's Offshore Betting Slip
Editor Keith Kohl gives readers four offshore stocks that will profit from Obama's offshore legislation.
Energy Independence or OPEC Enslavement?
Where will we turn for help as the U.S. government plans to rid us of our nasty OPEC addiction?
Oil Boom In Kenya
Christian DeHaemer gives readers the three secrets to finding oil, straight from the horse's mouth at the second annual Eastern Africa Oil, Gas & Energy Conference.
Hydrogen Fuel Cells: The Downfall of Tesla?
Lithium has been the front-runner in the battery technology market for years, but that is all coming to an end. Elon Musk is against them, but Jeff Bezos is investing heavily in them. Hydrogen Fuel Cells will turn the battery market upside down and we've discovered the tiny company that is going to make it happen.