+ The Next Nuclear Revolution

Last week, protests on Wall Street had a singular focus...

Hundreds of thousands of people gathered to oppose climate change amid a week of climate talks at a U.N. summit.

Speakers at the summit ranged from President Obama, to Iranian President Hassan Rouhani and American actor Leonardo DiCaprio, all of whom told a similar story about the possible effects of climate change.

And – even though the issue is as divisive as they come – I'm not here to argue definitions, instead, an intelligent investor has to keep track of fundamental changes in policy whether or not they agree with them.

Now that the E.P.A. has placed limits on carbon emissions, China is looking to cut back on smog, and that Germany has grown its renewable energy profile to 30% of their grid, the coming policy changes in the energy sector will be unavoidable.

And while the same environmental activists who spoke out against fossil fuels last week may loath the decision, nuclear is the next step.

“Nuclear is a capital-intensive investment, but it gives over a long time a very good, reliable, large-scale base load and it operates 24/7, which some of the other energy sources don't,” says head of the World Nuclear Association, Agneta Rising.

Nuclear creates virtually zero carbon emissions, generates a lot of electricity, and is consistent, which makes it the ideal candidate to take over for fossil fuels on the grid.

While wind, solar, and geothermal energy are a mainstay on environmental blogs and would be less risky sources of electricity, they are hamstrung by crucial limitations.

For example, solar is much more viable in sun drenched desert climates, while wind is only viable when there's enough wind to turn turbines, and geothermal requires geological precision and is only available in certain regions of the United States.

And all of these technologies still lack solutions for long term energy storage, making them intermittent.

But nuclear energy has none of these problems, which makes it very attractive for policy makers going forward.

My colleague, Christian DeHaemer recently wrote a piece on the bottom in uranium prices.

And from his analysis we can glean that in the next few years the nuclear energy space will take two forms: one will be thorium produced (more on that later this week) and the other will be from uranium.

As Chris said last week, uranium is near the bottom of its slide since Fukushima, and some bullish news has it back on our radar.

Not only does the bottom in price keep us happy, so too does the coming growth of uranium based power in Asia.

There are 70 reactors currently under construction throughout the world, and two-thirds of those new plants will be in Asia. Most of those gains will go to India and China, but other developing nations like Bangladesh and Vietnam plan to build the first plants in their history. 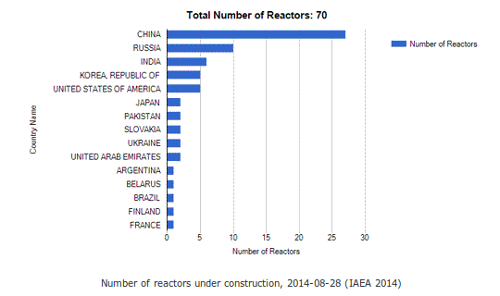 China plans to build 29 reactors by 2020. That amount will more than double their current capacity from 20 to 49 and add about 3,000 terawatt hours of electricity to their grid.

And, as far as we can tell, almost all of this nuclear power in Asia will be extracted through uranium fission.

So investors looking for a new way to play the energy space should look at uranium. It has the potential to get close to its historic highs in 2006 and 2007 before the crash.

Because there is such a finite amount of the element for us to use, when countries add more uranium based nuclear power, the demand sends the price through the roof.

So building a stake now while prices are still low is a good bet on the future of energy in the U.S. and Asia.

While there are many excellent ways to play the coming growth of nuclear power, one we have our eye on is Exelon Corp. (NYSE: EXC).

The company, like uranium prices, has fallen since the Fukushima disaster which gives it an attractive share price. 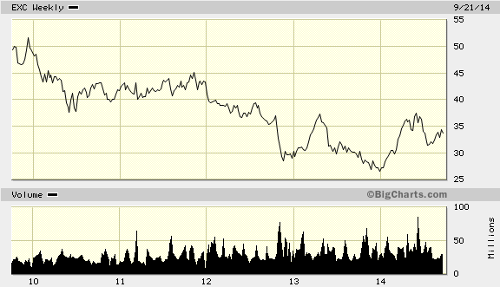 And since we know that nuclear is expanding, we also know that Uranium prices will go up. And when they do so will Exelon's share price.

Thus, building an investment now is a good way to see some gains in the future, and in the meantime the 3.63% yield is attractive while we wait for shares to move.