The Last Place You Expected to Find a Gold Rush

When you're surrounded by gold bugs, it's hard not to buy into the excitement.

But I become a tad concerned whenever the mainstream media latches onto an investment idea...

Maybe it's just me, but watching hundreds of gold commercials doesn't give me much hope. You never want to be the last one to find out, and chances are good that if you're hearing about it on television, you are the last one.

We know for a fact there's a better way for investors to play metals — one that you won't hear blaring repeatedly during commercial breaks.

Two years back, a colleague of mine told me he was heading to a conference a few hours away. I was interested and, at the time, feeling a little too penned-up in Baltimore, so I decided to tag along.

Not even ten minutes had gone by at this gathering when I was besieged by gold bugs.

They all were excited, and for good reason: Gold prices had more than doubled since 2004 and were threatening to break through the $1,000 ceiling.

Countless times throughout the day, one mantra was whispered into my ear: “Hope you're stocking up on gold right now.”

(Of course, both you and I know how that story played out. Since that day, gold has screamed higher, delivering more than 105% to anyone who followed that advice.)

But in the throng of the conference, each time I heard them say that only a fool would not be hoarding the yellow metal, I nodded politely and replied, “I've got something better for you. It's more than just gold.”

And the kicker: There's still a veritable fortune to be made in this investment — one that you won't hear about from the mainstream press.

Although gold is capturing the spotlight almost everywhere we turn, it isn't alone in its success.

Since the 2008 meltdown, you can see for yourself how metals prices have rebounded: 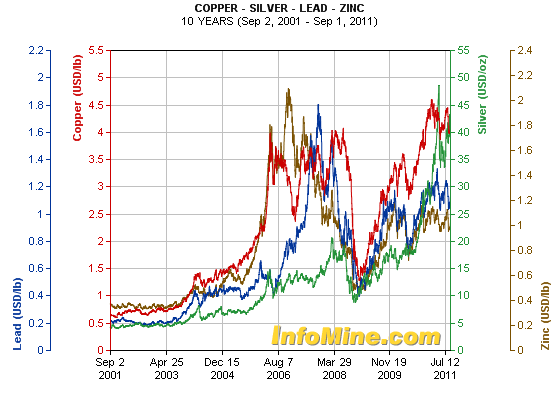 Now, I'll be first to admit when I look for offshore investments, my mind immediately goes to the prospective oil and gas companies drilling in ultra-deep waters...

But by next year, I have a feeling that's going to change. And it's all because of seafloor massive sulfide (SMS) deposits.

These deposits are the modern equivalent of ancient volcanogenic massive sulfide ore deposits (VMS). SMS deposits are formed around hydrothermal vents. Essentially, superheated water — rich with metals — leaked to the seafloor and mixed with the cold seawater, releasing the metal-rich minerals.

Back in the 1960s, explorers were able to identify SMS deposits on the seabed. In 1977, scientists discovered black smoker chimneys (a type of hydrothermal vent), and soon found the deposits contained considerable grades of copper, lead, zinc, silver... and gold.

Naturally, the technology to mine these underwater deposits wasn't available... until now.

Tapping the Last Gold Mine

Back on the conference floor, the idea of underwater mining companies was laughable.

"Those miners are going nowhere," I was told.

Since then, one company looking to tap these offshore resources doubled the return investors would have made from simply buying gold.

The company's name is Nautilus Minerals (TSX: NUS), and as you can see, the stock has certainly delivered so far: 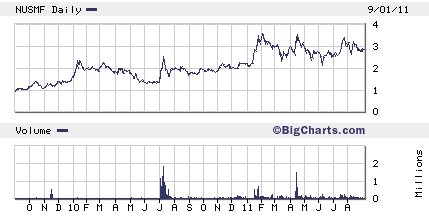 Nautilus was the first company to comb the seabed for the high-grade massive sulfide deposits. In fact, several of their backers include some of the world's largest mining companies.

Nautilus' deep-sea mining lease, acquired in January 2011, is the first of its kind. Their Solwara 1 project is located off the coast of Papua New Guinea in the Bismarck Sea, where deposits are found at a depth of 1,600 meters.

Taking a cue from offshore oil and gas technology, the plan is to cut ore from the seafloor and pump it to the surface as seawater slurry. The ore is then de-watered and processed onshore using conventional methods.

Once operations commence, Nautilus plans to produce approximately 1.3 million tonnes of ore per year, which holds about 80,000 tonnes of copper and up to 200,000 ounces of gold. Production will then be increased to 1.8 million tonnes per year.

This is may be the gold investment you don't hear about on the news. And by the time they catch wind of it, you'll understand why the media is always too late to the party.

You'll want to act quickly on this stock...

Word is already getting out about Nautilus — especially following news that the company was raising $100 million to fund its offshore mining project.