This is a continuation of an article we published on Friday. To read the first part, click here. But here is a very brief summary:

Both optimistic and pessimistic hype is rampant in investment markets and mainstream media. And if you're not careful, buying into this hype can cost you dearly.

Last week, we defined market hype as the intentional and aggressive promotion of a stock or sector with exaggerated optimism and gave some examples. Today, we show you exactly how to use the hype cycle to profit — as well as to avoid losses.

If It's Too Good to Be True, It's Probably Not

As we mentioned last week, it's not possible to avoid market hype. The fact is, it works. And that's why it's so prevalent.

Using basic common sense will help you identify hype. We're fairly confident you don't need help sniffing out BS; you know it when you see it. But now we're going to show you exactly how to profit from it.

Global research and advisory firm, Gartner Inc. (NYSE: IT) has created a model to show how hype works to affect stock prices. They call this model the hype cycle. 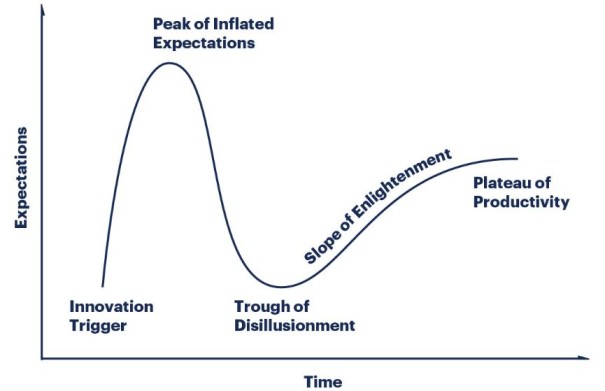 Gartner's model is specific to the hype surrounding new technology. However, it can be applied to anything from cannabis to tulip bulbs. The model has five stages. And I'm going to quote directly from Gartner's website to describe them:

Peak of Inflated Expectations: Early publicity produces a number of success stories — often accompanied by scores of failures. Some companies take action; many do not.

Trough of Disillusionment: Interest wanes as experiments and implementations fail to deliver. Producers of the technology shake out or fail. Investments continue only if the surviving providers improve their products to the satisfaction of early adopters.

Plateau of Productivity: Mainstream adoption starts to take off. Criteria for assessing provider viability are more clearly defined. The technology's broad market applicability and relevance are clearly paying off.

As an example of the hype cycle in real life, see every bubble ever.

Hype creates bubbles. It doesn't matter if we're talking Bitcoin or tulip bulbs, every bubble that ever existed was built on hype.

Also, it's worth mentioning that it's very likely that by the time you hear about a new technology or development, a million other people have heard about it as well.

So investing right at the very beginning poses risks and it's unlikely you're actually going to be able to do it.

A much better time to be an investor is in the trough of disillusionment. This is after the hype bubble bursts but before widespread adoption.

Technologies and markets in the trough of disillusionment right now would include electric vehicles, cannabis, 5G, and AI. All of these markets have already gone through their exuberant hype stages and have proven to be viable, long-term markets. It's likely that none will ever live up to the expectations put forth by promoters, but they all have a future.

We're sorry to tell you, dear reader, that rarely is anything ever as good as promised. But at the same time, we're glad to tell you rarely are things as bad as expected. Investors would be wise to always consider this in making decisions.

Marketers are able to hype up stocks and markets on the idea “you're going to miss out if you don't act now.” While that may be true sometimes, most of the time it's nothing more than hype.

This is what has been called today FOMO — the fear of missing out. In short, FOMO is an anxious feeling you might get when you feel other people might be having a good time or profiting without you. But it's just a trick to get you to buy, folks. Don't buy into the hype. The only thing you're likely to miss out on is giving up your money.

In conclusion, use Gartner's hype cycle to help guide you through the market. If everyone and their brother is talking about stock or market, it's most likely overvalued and headed for the trough of disillusionment. Let it happen. And then invest. Because even if you do miss out, there's always another stock or sector that will be hyped up next.

P.S. I hoped you enjoyed this two-part series on market hype and hype cycles. I want to recommend checking out two things on pro-social lies, which we discussed on Friday. The first is a new book by award-winning journalist and New York Times contributor Judi Ketteler titled Would I Lie to You?: The Amazing Power of Being Honest in a World That Lies. Ketteler's book is mostly a personal struggle with honesty and pro-social lies, but also examines the psychology of deception.

The second thing I want you to check out is a documentary on Netflix right now called Tell Me Who I Am. The documentary tells the true story of two brothers and a dark family secret. I'd recommend not looking up the story before watching the documentary, as it will spoil the secret. Furthermore, I'd also recommend not watching this with your children. The story gets very dark and, IMO, not appropriate for children.