Love or hate the guy, you have to respect Putin's knowledge of 11th century Chinese literature.

Nearly 800 years before the famous Drake well was drilled in Pennsylvania, a Chinese scientist named Shen Kua wrote a booked titled Dream Pool Essays, which predicted that oil and natural gas “would become widely used in the future.”

Naturally, this turned out to be the understatement of a millennium.

And while U.S. natural gas demand will continue rising at slow pace through 2040, China's gas consumption has increased sixfold since 2000. 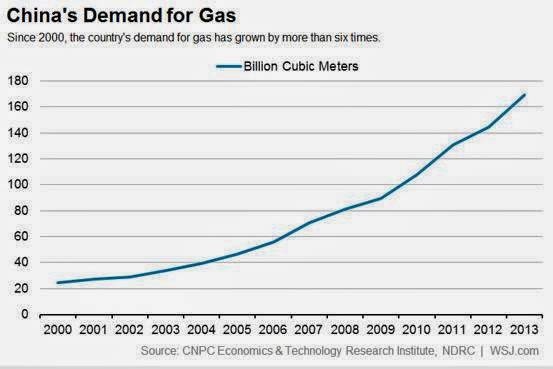 Luckily, Russia is willing to help out a friend in need... especially with the possibility of more sanctions ahead.

The two countries moved a step closer to a gas alliance after breaking ground on a $400 billion pipeline, which is expected to supply 4 trillion cubic meters of natural gas to China during the next three decades.

During the last 10 years, China has more than tripled its natural gas production, with output projected to reach 5.5 trillion cubic feet next year... but it's not nearly enough to satisfy its burgeoning demand.

Still, you can't really blame China for using more natural gas. The country has been looking to transplant its addiction to coal for years (reducing its air pollution in the process).

But despite the country's growing love for all things natural gas, it still won't hold a candle to U.S. consumption — even 30 years from now!

And it's up to you to take advantage of this...

A few years ago, I told you that tapping into the United States' shale oil and gas resources is — without question — the single-greatest investment opportunity of our lifetime.

You can't say you didn't see this coming, either.

The Energy Information Administration, which itself was a few years late to the party, showed us precisely how important shale gas will become going forward... 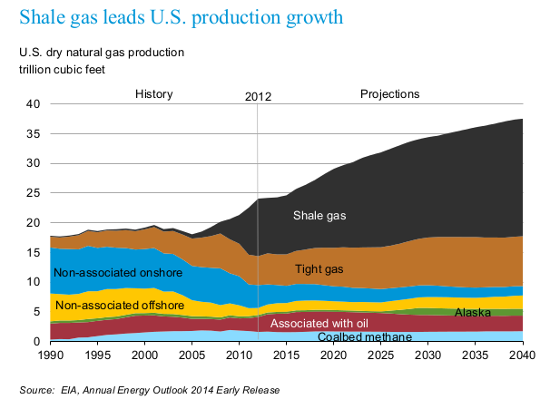 Yet there are still few people who understand how vital this production has become to the United States energy dynamic. And even though this is certainly the case for tight oil plays in states like North Dakota and Texas, which account for 48% of our domestic oil production, the disparity is even greater when it comes to natural gas.

Simple: Nowhere else in the U.S. shale revolution do you see one formation mask production declines happing virtually everywhere else. Last week, I mentioned that production from the Marcellus shale recently topped 15 billion cubic feet — about 40% of all U.S. shale production.

In fact, the EIA even reported that shale gas will be responsible for 87% of the United States' natural gas production growth between now and 2040.

And below are just a couple of the projects that have sprung up lately in the Marcellus...

Not only will this trend continue, but we're also going to see similar projects pop up across the Appalachian Basin.

Of course, there's one remarkable advantage that we hold over both Russia and China.

Cabot Oil & Gas has already shaved nearly a million dollars off of its drilling and completion costs in the Marcellus... and how it did it isn't a secret.

You see, there's a fundamental transition taking place in virtually every shale play in the Lower 48.

If you haven't done so yet, I strongly urge you to learn about this revolutionary technology that will shape U.S. shale development for the next three decades.