Last week, the Tokyo University of Science released a report that threatened to upend the entire automotive market.

The bombshell research showed success for a highly experimental new battery that would replace lithium with magnesium, a dirt-cheap and highly abundant metal.

Early tests show it has the potential to one day rival lithium-ion batteries in terms of energy density. For the companies that have invested billions in developing lithium-based batteries, that’s got to be tough to read.

China especially has spent a fortune on establishing itself as the world’s lithium carbonate leader. All of that could come crashing down in an instant.

Magnesium is significantly cheaper than lithium, and it can be mined virtually anywhere in the world. What’s stopping the lithium market from crashing overnight?

Well, there are a few things. Most importantly, this happens every single week. New battery chemistry is this decade’s flying car.

Back in the 2010s, each week would bring a fresh batch of headlines claiming that winged minivans were right around the corner — just one breakthrough away.

Of course, here we are in 2022 and still surrounded by both earthbound cars and lithium batteries. No company has managed to bring any alternatives into reality — but that hasn't stopped them from trying.

Every week, a new type of metal gets the honor of being the “battery that dethrones lithium”... yet a week later, it fades into obscurity.

There’s a good reason for that…

Lithium Is King — Science Says So

Aside from the fact that most mainstream media outlets are sensationalist, lithium has a valid claim to the battery throne.

Chemists have long admired lithium for a few key properties. It’s the lightest metal currently known to exist, and it easily releases positively charged ions in the right conditions.

Those are the two Holy Grails of batterymaking. As an alkali metal, lithium can store huge amounts of energy for its size. But most importantly for practical use, lithium is also relatively cheap.

Don't get me wrong — we saw spot prices approach $100,000 per ton recently. That certainly doesn't sound cheap. But compared with other rarer elements like cobalt and platinum, it’s a bargain.

In a nutshell, lithium-ion batteries are remarkably simple. During charging, current from a negative anode moves through a lithium-saturated electrolyte to a positively charged cathode 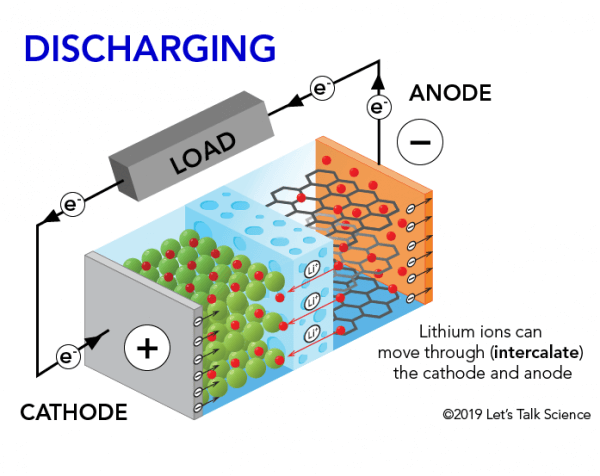 The excited ions stay trapped on one side of a semi-porous separator, waiting patiently until it’s time to be released. When power is needed, the process is reversed and current flows from the cathode to the anode.

Swapping out the pricier elements with something cheaper has so far proved futile. The battery industry has made it overwhelmingly clear that lithium is the metal of choice for the foreseeable future.

That leaves us with just one solution: Do lithium better.

We aren't going to run out of raw lithium anytime soon, but that doesn't mean endless mining is the best solution.

Have you ever thrown away an old laptop or cellphone? If so, you've basically just thrown away gold.

As it turns out, with the right technology, lithium can have a nearly unlimited life span. But apparently not every company can do it properly.

I've never seen anything like this company's proprietary technology before. It has the potential to turn batterymaking into one of the planet's greenest industries.

You need to see this for yourself. Tech junkies and shrewd energy investors alike will be blown away by the results.