Speaking to reporters on Friday about the widely condemned withdrawal from Northeastern Syria, President Trump claimed, “We've taken control of the oil in the Middle East — the oil we're talking about. The oil everybody was worried about. We have the U.S. is in control of that.”

After that comment was questioned, Trump doubled down on Friday, tweeting: 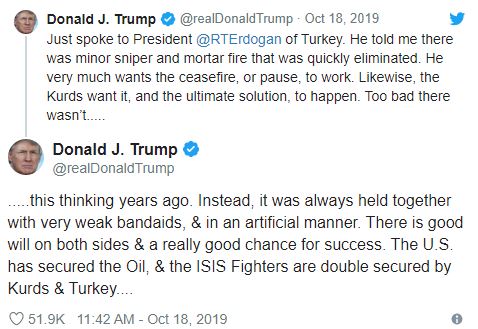 And then again on Sunday, Trump tweeted: 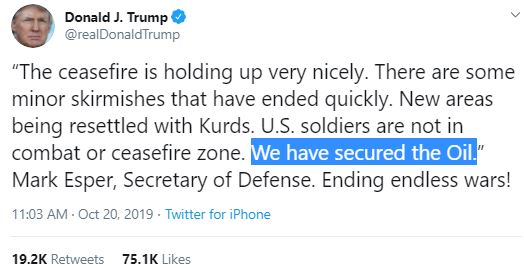 Both of these tweets have apparently been deleted from Mr. Trump's Twitter feed, as I was unable to find them this morning.

Nevertheless, we're not exactly sure what Mr. Trump means by saying the U.S. is in control of oil in the Middle East.

Firstly, there's no way the U.S. has taken control of all the Middle East oil. So we'll assume he meant oil in Syria. But that still doesn't make much sense.

Much of Syrian oil has been controlled by the U.S.-backed Syrian Democratic Forces (SDF) for a while. In 2016 the United States and the SDF built a military airfield near major oil and gas fields in Syria as part of its ongoing fight against ISIL.

So we don't know what he's talking about. But we can say for sure that these statements are quite misleading.

What these statements do is confirm the idea that the only reason the United States in involved in Middle East conflicts is over oil.

And that's not completely true.

Of course, oil has played a part in America's involvement in the Middle East — a big part. But it's not the only reason America has a desire to take down the Middle East.

Much of America's conflict with the Middle East has to do with the relevancy and reserve currency status of the U.S. dollar.

The U.S. dollar is the de facto world currency. What that means is that nearly all sales of commodities — like crude oil — are conducted in USD. And because most countries rely on imports of commodities, they are forced to hold large stockpiles of U.S. dollars.

That creates constant demand for the dollar and supports its value, regardless of the economic condition in the United States.

In the early 1980s, a guy named Saddam Hussein — you've probably heard of him — rose to power and decided Iraq wasn't going to play that game anymore.

Over the following two decades, the United States would remain successful in stopping Saddam and others from decoupling oil from the USD. But in the year 2000, Saddam finally got around to changing Iraqi oil transactions from USD to the euro.

Of course, that didn't sit well with the United States, and we took immediate action. And this is what I believe to be the main cause of 9/11.

Oil is related to Middle East conflict. But in a world where energy was dirt cheap, any commodity could have served as the source of reserve currency conflict because all commodities (gold, silver, timber, orange juice, coffee, etc.) are only traded in USD.

The reserve currency status of the USD has given America an unfair advantage over every other country on the planet for decades. That's not something you might want to hear. But we cannot deny this truth.

As long as this advantage exists, there will be, at all times, conflict. So we must make a decision: Do we fight to retain this unfair advantage, knowing it will result in the deaths of thousands and cost taxpayers trillions? Or do we come up with a solution such as a single world currency to stop future conflicts?

Time will tell. But my guess is we continue to fight.