Trump and Biden Are Not Responsible for High Gas Prices — You Are!

According to all the vitriol on social media, high gas prices are the result of one of the following reasons…

Both of these are highly inaccurate.

High gas prices are actually the result of something far more inconvenient.

It's something few of us want to admit because it places the blame on our collective inability to accept an awkward truth: We’ve taken too long to transition from the outdated internal combustion engine to something that is far more efficient and could help erode the strength of bully dictators who enjoy great power that’s funded by the world’s overreliance on oil.

When you look at the world’s top-three oil-producing countries (aside from the U.S., which, make no mistake, is not innocent in terms of violent actions used to protect oil supplies), they are among some of the most violent, undemocratic countries in the world:

The world’s overreliance on outdated combustion engine technology is one of the reasons these countries can continue to violate human rights, start wars, and serve as a general danger to world peace.

It’s easy to pull up to the pump and blame the politician we hate most, but if we all weren't driving internal combustion vehicles, these violent nations wouldn’t have the cash to fund their tyranny.

This is actually the primary reason I’ve been bullish on electric cars since 2007, when I first reported on Tesla — before it went public. And we know how that worked out for early investors… 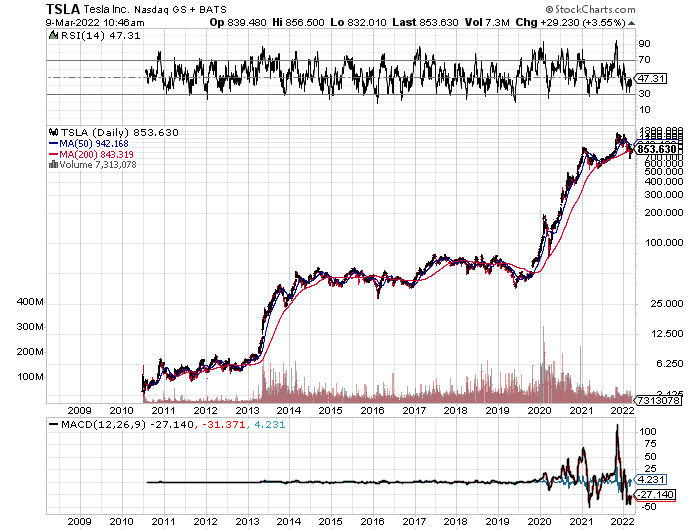 Being able to make a ton of cash while helping instigate a transition away from internal combustion feels pretty great, I can’t lie.

Of course, with the rapid transition to electric vehicles, we do find ourselves relying on other commodities that can also give power to dictatorial leaders who run countries rich in everything from cobalt to lithium.

But since we’re still in the earliest stages of this transition, we do have the ability to build out some of these mining operations in countries that aren’t hostile toward freedom, human rights, and environmental sustainability.

Elon Musk has certainly gone to great effort to invest in mining companies that supply the necessary materials for electric car batteries, but he focuses on nations that seek to mine these materials responsibly.

And here in the U.S., great efforts are being made to ensure that the materials necessary for electric battery production either come from within our own borders or from our allies.

This is a nice combination of benefits that not only allow us to create a safer, more responsible, and sustainable transportation economy, but it also allows investors like you to get an early piece of what is essentially the equivalent of the next oil market.

I know some folks have a hard time accepting this, mostly for political reasons, but internal combustion’s dominance will soon be over.

According to Bloomberg New Energy Finance, fuel for internal combustion vehicles is set to peak in 2027 — just five years from now.

It will plateau for about 10 years and then drastically plummet as nearly 70% of all new global car sales will be electric by 2040.

This will also be around the time when electric vehicles will charge in roughly the same amount of time it takes to fill your tank with gas or diesel, the EVs themselves will travel over 400 miles on a single charge, and charging stations will become as ubiquitous as gas stations.

The transition IS happening, and if you have any sense about you, you’ll get a piece of this action now.

P.S. You've probably heard all the buzz about a special briefing that's free to Energy and Capital readers and is happening later today. On the off chance you haven't, it's called Asymmetric Profits, and it'll be hosted by my colleagues Dave Roberts and Sean McCloskey. I'm sure you've been hearing about how the Russia-Ukraine war has triggered a new wave of inflation — we've already seen prices starting to skyrocket. These guys will be talking about how to beat inflation at its own game. There’s a strategy they'll get into that can take a small stock gain and make it as much as 49x bigger — often in a matter of days. Dave and Sean will also cover more critical information every investor should have right now during these times of global uncertainty. Asymmetric Profits is happening today, March 10, at 4:00 p.m. EST (1 p.m. PST). If you want access to this event, go here, and they'll send you a reminder right before the event starts.