Trouble Is Brewing Behind the “Silicon Curtain”

China is toeing the line of plausible deniability with its military drills near Taiwan. In a blatant show of intimidation, 71 aircraft were spotted in a single day.

The ominously titled “strike drill” was carried out by an assortment of J-10, J-11, J-16, and Su-30 fighter jets, plus two Y-8 maritime patrol aircraft, a KJ-500 early warning aircraft, and both CH-4 and WZ-7 military drones. 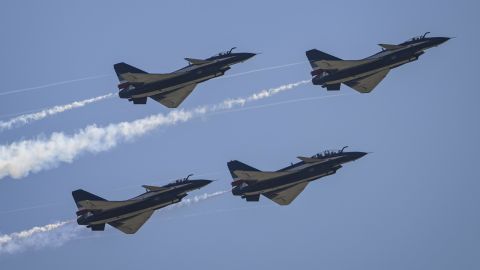 Considering how desperate President Xi Jinping is to absorb Taiwan back into the mainland, it’s hard to imagine this drill was a coincidence.

As you're most likely aware, Taiwan is protected by its world-class chipmaking expertise. Taiwan Semiconductor (TSMC) is capable of producing chips that no other company on Earth can manage.

China desperately wants to build a similar industry from scratch but has so far failed miserably.

Now that the U.S. has banned the sale of advanced chip manufacturing equipment, those dreams are effectively over. That’s bad news for Taiwan, unfortunately.

After all, why waste time building your own industry when you can pillage your neighbor instead?

China has historically felt entitled to Taiwan anyway, but the “silicon curtain” has so far proved impenetrable. Taiwanese officials have remained remarkably unbothered by the entire affair, but it’s impossible to ignore the danger here.

Chips have essentially become the “new oil,” according to some analysts. I’m tempted to agree, considering China seems happy to launch into full-scale warfare to control the industry.

Xi’s offensive isn’t taking place solely on the battlefield, though. There are countless other ways that China can exert its influence over the already-struggling semiconductor market.

President Biden may have cut off China from U.S. chipmaking equipment and other resources, but China has just as much economic firepower to throw around.

Just because TSMC has the brains to make the world’s most advanced chips doesn't mean it operates in a vacuum. The supply chain for this industry is a sprawling beast, and guess where a good portion of it originates?

China produces a few key components that are critical to the manufacturing process. And now that Ukraine and Russia are essentially offline, nearly 100% of the world’s demand for one especially critical material falls entirely into Chinese hands.

It’s the economic equivalent of the strike drills: Show your enemy that you can defeat them with a single swift action.

The pot is boiling over. Biden will most likely keep dishing out sanctions and export bans until China feels enough is enough.

The military drills are most likely just posturing — I would be genuinely surprised if China launched an actual military attack on Taiwan.

The attack itself will almost definitely be economic. Though the Chinese navy is impressive, the sheer power of the Chinese economy is a force unlike anything else on Earth.

So what happens if Xi gives the order to stop supplying Taiwan with crucial raw materials until it agrees to a list of ransom demands?

It's no longer just fearmongering; the situation has escalated significantly in recent months. If China decides to choke out the already-weary semiconductor industry, it won’t just hurt Taiwan.

Going scorched earth on the market most likely won’t be good for China in the short term either, but it seems Xi would rather tear the country down and rebuild rather than play nicely.

China is the sole supplier of arguably the most important ingredient in the process. Without this precious and expensive material, none of the world’s most advanced chips would be possible.

Slowing down exports of this resource would hit TSMC the hardest, considering few other companies can make these next-generation chips. If I were China, I’d start there.

Companies that depend on imports from China are going to be in hot water for the next few months, maybe even years. If you’re heavily invested in the sector, now might be the time to start thinking about panicking.

It’s for this very reason that our team has been searching high and low for semiconductor plays that are immune to China’s bullying.

It's nearly impossible to diversify your company’s supply chain when nearly 99% of it comes from one place. It takes careful planning and financial discipline — something many companies seem to lack lately.

If I had to narrow it down to a single play, I’d choose this company. It ticks all the boxes in terms of profitability, financial common sense, and, most importantly of all, diversified supply chain.

Even if China goes nuclear and shutters its doors forever, this team will keep chugging along. Are you wondering how it's managing to pull it off?

Keep reading here — this free presentation walks you through every step.

Our guide has it all: stock tickers, tips on when to buy, and even a complete breakdown of the modern semiconductor industry.

Trust me, you don’t want to try to do this alone. Let us show you exactly what to look for.