Touch vs. No Touch Cannabis Companies

I flew out to Denver last week with Green Chip Stocks editor Jeff Siegel and a few of his subscribers.

The purpose of our trip was to meet with some of the players in Colorado's booming billon-dollar cannabis industry and to get a firsthand account of the legal bud biz now that much of the dust has settled.

We had a chance to visit a few different types of growing operations and talk with several owners and distributors about law, finances, marketing, and risk associated with the cannabis industry.

I won't bore you with a bunch of photos of pot plants I took while on the trip. Basically, if you've seen one pot plant, you've seen them all, right?

But one of the more interesting operations was a unique vertical growing system, seen below, that maximizes cultivation space in large warehouses with high ceilings. 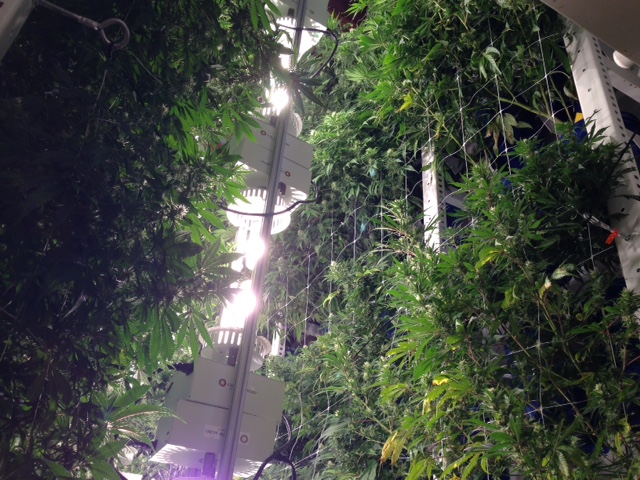 But I'd also say these consequences are negligible to slight — and generally not substantial enough to outweigh what I'd consider a "natural right" for an individual to do with his/her body or life as they please (as long as it doesn't directly affect anyone else). So I do support full legalization of recreational use.

Quite frankly, I don't think I fully understand the opposition to legalized weed.

But from a business standpoint, I've been skeptical from day one about the risks associated with the newly legal recreational marijuana industry.

My major reservation about investing in Colorado or Washington State's legal cannabis industries is simply that the federal government can still come in at any time and shut the whole thing down.

And after meeting with some of the people behind the scenes in the industry, I'm not alone in my fears.

Nearly every grower and distributor that I spoke with in Denver told me that the risk of the federal government putting the kibosh on Colorado's canna-business is still very real. And with a presidential election around the corner, there's really no telling what could happen.

However, after seeing the entire operation from “seed to sale,” I walked away with a few investment angles that will help mitigate the risk associated with a fed shutdown.

“Touch” vs. “No Touch” Cannabis Companies

There are currently two industry terms floating around the legal marijuana field that haven't been picked up by the mainstream financial media. They divide companies involved in the cannabis industry into two main groups:

I suspect that the division likely stems largely from the industry's inherent fear that it will be shut down. Some companies have taken steps to diversify their “touch” and “no touch” cannabis-exposed portfolio, including the DANK Recreational Dispensary.

Among the first people we met with in Denver's cannabis industry was Jay Griffin, co-owner of DANK.

DANK has a boutique type of recreational marijuana dispensary as well as its own growing and packaging facilities — that's the “touch” side of its business.

But DANK also provides “no touch” services such as industry consulting, marketing services, and software that help others in the industry to remain compliant with state and local regulations. DANK's CannaScore software provides a rating, similar to a credit rating, indicating how compliant the respective canna-business is in relation to all state and local laws and regulations.

DANK also works with another “no touch” canna-business: Philadelphia-based Kush Bottles, North America's premier supplier of certified, child-resistant packaging in all 23 states that permit recreational or medical marijuana use, as well as in Canada.

In 2014, DANK formed an exclusive distribution agreement with Kush Bottles. As a result, Kush has increased its sales to about a million bottles per month! 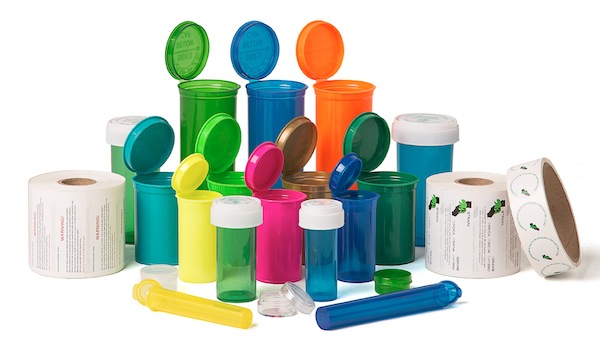 Kush Bottles recently IPO'd, trading OTC under the symbol “KSHB.” However, there doesn't seem to be any volume in the stock. So buyer, be extremely aware.

Nevertheless, Kush's financials seem strong. For its fiscal year ending August 31, 2015, the company posted record revenues of over $4 million, up 135% from FY14. It was named to Inc. 5000's “Fastest Growing Companies in America” list and was the highest-ranked company within the cannabis industry.

Kush Bottles is just one specific example of the “no touch” side of the industry that stands out as a possible investment angle.

But of all the “no touch” investment angles in the cannabis industry, there's one that really stands out to me the most: real estate

In the interest of time, that's something I'm going to save for Wednesday. I actually believe there could be more money in commercial canna-real estate than in growing and selling the plant itself. So you're going to want to check that out this Wednesday in an article I will title "The Canna-Real Estate Boom."