Too Big to Grow

Joe Kennedy — a famous rich guy and father of JFK — used to tell the story of how he got out of the market before the 1929 crash when a shoeshine boy gave him some stock tips. He figured that when the shoeshine boys have tips, the market is too popular for its own good.

Bernard Baruch, another Wall Street big shot, described the scene before the crash:

Taxi drivers told you what to buy. The shoeshine boy could give you a summary of the day's financial news as he worked with rag and polish. An old beggar who regularly patrolled the street in front of my office now gave me tips and, I suppose, spent the money I and others gave him in the market. My cook had a brokerage account and followed the ticker closely. Her paper profits were quickly blown away in the gale of 1929.

Last night, I was at the Brewer's Art with my delightful wife, and a man there started telling me about how much money he’s made in Tesla. He bought the stock after he bought the car. This was all unsolicited, but the shoeshine story came to mind.

Today, the Nasdaq is up 143 points in premarket on the news that the World Health Organization (WHO) has declared that the coronavirus is not a pandemic.

Sylvie Briand, director of global infectious hazard preparedness at the WHO, said, "Currently, we are not in a pandemic; we are at a phase where we have an epidemic of coronavirus with multiple foci and we try to extinguish each of these foci.”

Hmm... sounds kinda wishy washy to me. But it was enough to drive the market higher this morning.

And of course, Tesla, the maker of electric automobiles, jumped 20% yesterday and is up another 15% in premarket. And it’s not over; there is room to run as the short position is still at 25%.

I do love a good short squeeze.

As you know, a short squeeze is when a stock price shoots higher on low liquidity. It occurs when there is a lack of supply and an excess of demand for the stock due to short sellers buying back their stock at a higher price and taking a loss. The momentum traders see what is happening and buy more, pushing it up further.

We saw the same scenario with Beyond Meat (NASDAQ: BYND) late last year.

The upshot is that the TSLA stock is now irrational. It could go up or down 50% from here with no logic or meaning, and it might. If you own it, you might want to take some profits. If you don’t own it, stay away.

Alphabet (NASDAQ: GOOG) reported earnings yesterday and missed on revenue growth. I found it fascinating because I had just finished reading a research report by Horizon Kinetics that said Google was running out of growth. Here is the pertinent section:

At some point, Google and Facebook will be rerated from high-growth tech companies to cyclical advertising companies. Looks like it might already be starting to happen.

Google and Amazon are also looking down the barrel of an antitrust suit from the federal government. I expect it will happen as soon as Trump wins the election in November.

Too Big to Win

Trees don’t grow to the sky and stocks don’t go up forever.

Morgan Stanley recently reported “Apple, Microsoft, Alphabet, Amazon, and Facebook make up 18% of the total market cap of the S&P 500, an unprecedented level of dominance."

In the past, stocks that dominated the S&P 500 did poorly over the next five and 10 years. 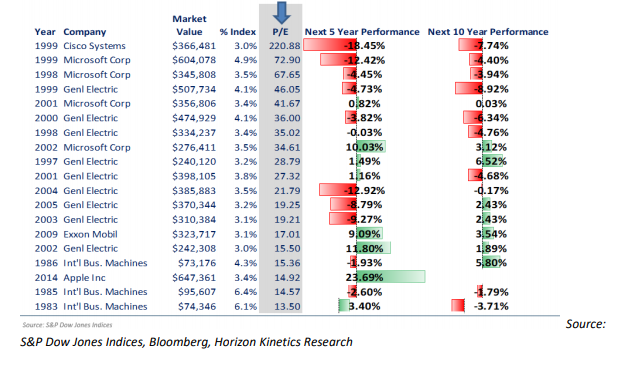 The upshot is that it is time to sell the FAANG stocks and buy the MVPs. Click here to find out more.