Time to Switch to Large Caps

Hope you all had a great Fourth of July weekend. It was top notch here in Maryland. We had a great day of sailing with blustery winds blowing up the Chesapeake. Steaks were grilled, crab cakes devoured, and the corn from the Eastern Shore never tasted better.

My neighbor who owns an adjacent farm must have lit off $20,000 in fireworks, the big ones like you see after the Frederick Keys play on Friday nights. I’ve never met him and have no idea how he gets away with it… but you know the fix is in.

Speaking of spending money, it seems every time I take my wife or kids out to dinner, there is a "help wanted" sign in the window and slow service. The economy opened up but no one wants to go back to work.

Who can blame them?

My first job after a long stint delivering The Boston Globe was in the scullery of a dive bar. The messy plates would pile in great heaps, and it didn’t take long for the $3.35 an hour to weigh precious little against the steamy chore.

Besides, I was 15 years old, and my parents bought the food and lent me a bedroom. I quietly put down my apron, bid the Hobart goodbye, and snuck out the back door.

Same as It Ever Was

These days, Papa Biden buys the food and won’t allow the landlord to evict people for not paying rent.

People don’t have to stress. They make more money from unemployment than they did from the daily grind. Why not sit on the dock and crush Coronas until the sun sets? It's a nice gig, doing nothing. I highly recommend it.

But alas, times change. Many states have ended the bonus for unemployment. The Texas governor, just to twist the knife, has even spent the federal funds on a border wall.

And so it was that the Department of Labor reported 850,000 jobs were added in June and the average earnings jumped 3.6% from a year ago. The country is still short 6.7 million jobs compared with the start of the pandemic, but the trend points to more workers and higher pay.

This in turn is great for the economy, especially large-cap stocks that make up the limited choices in most 401(k) retirement plans. It is partially for this reason that I sold my small-cap funds and bought large-cap growth funds. The other reason was that the small caps are overbought. 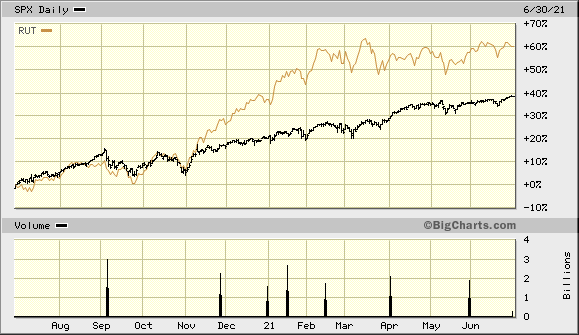 The Russell, which contains the smallest 2,000 stocks in the Russell 3000 Index, has been on fire over the past year, more than doubling off the March 2020 lows.

Meanwhile, the large caps have been underperforming but are still doing pretty well. If you believe in reversion to the mean, large caps are due to do better than the little guys. And if you don’t, more jobs means more money to the blue chips in a thousand different ways, from 401(k)s to more computer stations, gasoline, and nice clothes.