Elon Musk is an enigmatic billionaire at best. He is a big, bold thinker who produced some incredible technology, from flamethrowers to boring machines.

But his bread and butter, Tesla, Inc. (NASDAQ: TSLA), is failing.

The electric car tycoon warned us that he might have a bad quarter, but the market was shocked by the size of the loss.

Of course, Elon made like this was just a bump in the road and that the company would be back to profitability in the second half and cash flow positive this quarter.

However, as I’ve been saying for years now, Tesla’s lead in technology has shrunk to nothing. Every car brand in the world is coming out with a luxury electric car.

Porsche has an all-electric sedan called the Taycan that is purported to run a sub-eight-minute Nurburgring lap. It is due out next year and will be priced around $75,000.

Tesla has now dropped back below GM and Ford in terms of market capitalization.

To hit these numbers, it would have to deliver 76% above its Q1 numbers. That’s unlikely. Everyone who really wanted a Model 3 was on the waiting list and already bought one.

Moreover, prices will jump by $1,875 after July 1, when the federal electric vehicle tax credit falls by 50%.

And many buyers are waiting for the Model Y crossover that was hyped last month. You can order now, with prices starting at $43,000 and a delivery date in 2021.

Here’s a marketing tip, Elon: Don’t hype a car two years in the future when you are trying to move your current product.

This is a five-year chart of TSLA: 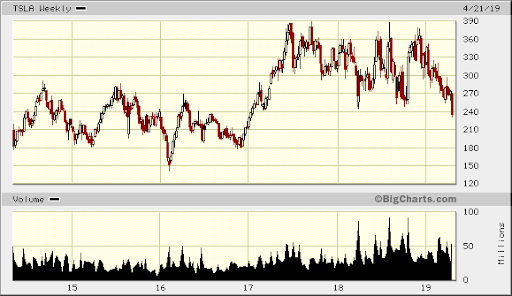 The shorts were right eventually. The share price has given up over 140 points since December. It has sliced through support and is in a serious downtrend.

The next support line is $180. Tesla has a market cap of $41 billion and no earnings. Price to book is 8.99. In the first quarter, Tesla’s automotive segment’s revenues fell 41.1% sequentially. The company’s gross margin fell to 12.5% compared to 20% the previous quarter.

The largest electric car company in the world is in China and goes by the name BYD (OTC: BYDDF). It rises while Tesla falls.

That said, BYD might not be the best way to play the increasing market share of electric cars. There is plenty of competition and thin margins.

And with a P/E of 48, it still seems overvalued. Toyota, arguably the best car company in the world, has a P/E of 7.8 and pays a 3% dividend.

One thing I do know is that China is increasing its electric grid to power all these new cars. And it's importing a lot of coal to do so. The U.S. currently exports 1.1 million mt of coal per year.

Coal prices in China are jumping: 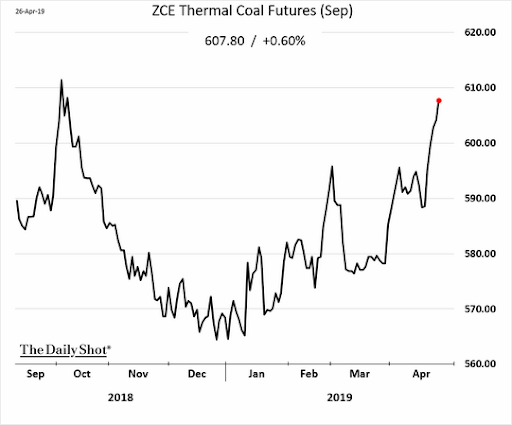 I’ve found one forgotten coal company that pays a 10.41% dividend.

This deal could be announced at any moment — and when it is, U.S. coal exporters will jump overnight.