THIS Will Be Trump's First Problem

The very first hurdle for Trump will be addressing the U.S. federal debt.

And it's climbing by about $2.9 billion per day.

That means the U.S. national debt will cross $20 trillion within the next two or three weeks — almost immediately following Trump's inauguration.

When the national debt does top $20 trillion, it will be both national and international news. And on that day, gold prices will soar.

The price of gold has a strong correlation with U.S. federal debt. That's simply because, even though they're no longer coupled under the Bretton Woods system, the U.S. dollar and gold still exist as primary competitors for wealth storage. And the value of the greenback is inseparably linked to U.S. federal debt. 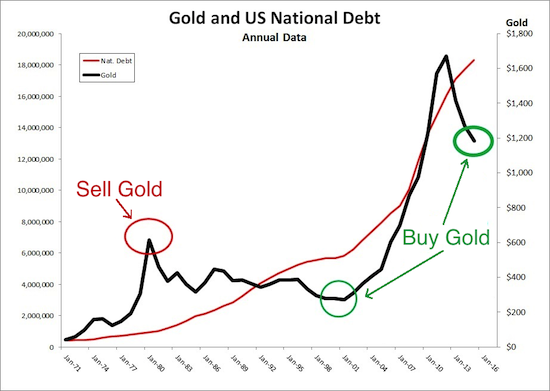 Then it nearly doubled under Obama's regime to almost $20 trillion today. So there's no doubt we'll hear rhetoric from both sides of the aisle play the blame game whenever the $20 trillion level is triggered. Here's what I imagine the Drudge Report headline will look like... 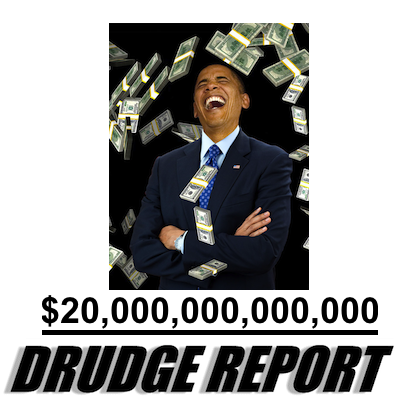 But after pointing fingers, they'll look to Trump for answers.

He'll probably point fingers, too. I'm guessing Trump will emphasize that cutting what he sees as wasteful spending, like the “Obama phone,” will help even out the national debt. But even if Trump cuts every single welfare program in the United States, the savings wouldn't put a dent in the debt.

The U.S. spends about $750 billion annually on welfare programs. The debt increased by over $1 trillion last year and is expected to increase more than $3 trillion this year. And putting an end to all welfare ultimately doesn't address the tab.

I also expect Trump to say that his plans to boost the American economy will make it possible to pay down the country's debt. However, Trump's current plans for boosting the economy (infrastructure spending, rebuilding the military, cutting corporate taxes, etc.) means the country will have to start spending money again (a.k.a. going deeper into debt) before we can start writing those checks to pay back any debt.

And I don't think Trump will shy away from that reality, either. I actually expect to hear a general message of “you've got to spend money to make money” from Trump in addressing this first hurdle.

Some have already estimated Trump's spending plans will add another $5 to $10 trillion to the national debt. Is it unreasonable to imagine America's debt doubling again from here to $40 trillion under a Trump administration, given eight years of office?

Time will tell. But there's no doubt that the national debt is headed much higher in the near term. By the end of 2017, the total government debt in the United States is expected to be $23.2 trillion — and that doesn't include any spending on Trump's part.

After months of weakness, gold prices are actually trending higher now. So if you're going to buy gold, the time to do it is right now. As I mentioned, the national debt crossing the $20 trillion level will be big news. And you're going to want to own gold before that happens.

The worst-case scenario here — and it's one that Trump has actually even been joking about — is simply defaulting on the debt. This would devastate the “full faith and credit” of the United States and destroy the dollar.

A complete default on the debt seems quite unlikely to me in the immediate future. Nevertheless, fears of a U.S. debt default will add to gold's appeal and value. So I urge you to own the yellow metal today.