This Fuel Cell Stock is on Fire

Hottest Stock of the Year

It's the turnaround story of the decade, and we own it.

Plug Power (NASDAQ: PLUG) makes fuel cells for forklifts. A fuel cell is a nonpolluting engine that passes hydrogen through a membrane and creates electricity. The idea has been around for decades, but the technology just got cheap enough to make economic sense.

Recently, Plug had been teasing a big deal from an “unnamed retailer.”

That retailer turned out to be Wal-Mart. It can't get bigger than that!

"The world's biggest retailer has ordered another 1,738 of them, almost 40% of Plug Power's total existing installed base of about 4,500 units and representing the company's single biggest order ever. For additional perspective, the number of cells ordered is triple the number Walmart is already using in two refrigerated distribution centers (535)."

That means they don't have to install batteries every shift, nor do the lift trucks stink up the place like diesel-powered ones. The engines are cheaper, and they take up less space.

The company also has deals to extend range in electrical trucks and for the use of its fuel cells in refrigeration units. There is even talk about fuel cells replacing the lithium-ion batteries on Boeing's new Dreamliner airplane. 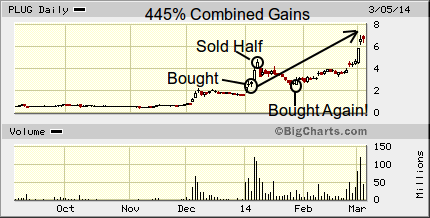 At Crisis and Opportunity, I told readers to load up on Plug Power once it hit my buy screen back on January 8, 2014.

The stock is running because there has been a tipping point in fuel cell technology. Wal-Mart doesn't suffer fools and wouldn't buy these lift truck engine systems if they weren't cost effective.

Now I've found another fuel cell stock. It has been running, but it is still below a $300 million market value and is sitting on a $60 billion market. The company has the power to turn air into gas.

Click here now. You can't afford to miss this one.