The Wind Blows, the Sun Shines, and Coal Struggles

A hundred years ago, renewable energy was nothing more than an afterthought.

Even hydroelectric power, the unsung hero of the renewable energy sector, contributed nothing more than a trivial amount to our country’s power generation. In fact, it wasn’t until the 1920s that the U.S. Army Corps of Engineers started building new hydroelectric plants.

And had you asked someone back then what they think about shuttering coal plants for the sake of the environment, you’d be laughed out of the room... or worse.

You couldn’t blame them for their harsh reaction, either. Back in 1908, coal accounted for roughly 75% of energy consumption in the United States! 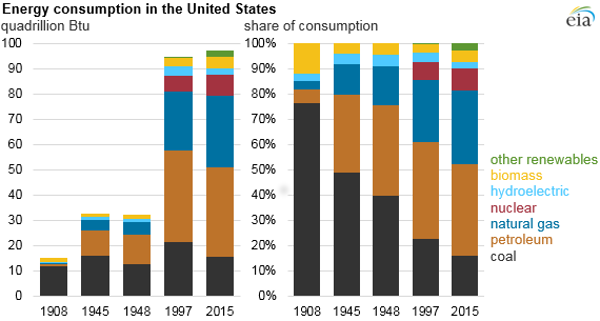 The transition away from coal has been ongoing for the better part of 100 years.

And yet, things are just starting to get exciting...

Coal Struggles, the Wind Blows, and the Sun Shines

Now, we both know that the public is (rightfully) concerned about the effects of fossil fuels on the environment.

Whether we want to admit it or not, the problem has always come down to one thing: money.

You see, renewable energy used to be an exorbitant cost for companies and virtually impossible for residential use.

Over the last 10 years, however, things have flipped upside down.

Part of that change has to do with new governmental restrictions and policies. The Paris climate accord last December had 195 countries come together to agree to limit fossil fuel consumption and attempt to move the world to more “environmentally friendly” sources of energy.

In addition, the U.S. has certainly put more restrictions in place, with Obama’s EPA declaring all-out war on the coal industry. Utilities were hit hard, having to move from the highly subsidized coal industry to more alternative sources.

Well, keep in mind that the Obama administration also introduced rules last year that require power plants to cut carbon dioxide emissions by nearly one-third of their 2005 levels by 2030.

As you might expect, this war on coal has had its intended effect. Solar and wind accounted for 60% of new U.S. power capacity last year.

Yes, it’s working out pretty well for everyone not exposed to coal prices.

And not just for green startups or environmentally conscious citizens, either.

It’s cash cow for you, too.

So, of course there’s pressure from the government to transition, but things are also getting much, much cheaper.

The average price of the PV panel needed for solar installation has more than halved since 2004.

And that’s not to mention the government incentives, mind you. Not too long ago, Congress renewed tax credits on solar and wind power for another five years.

Let me show you what kind of growth we’re talking about: 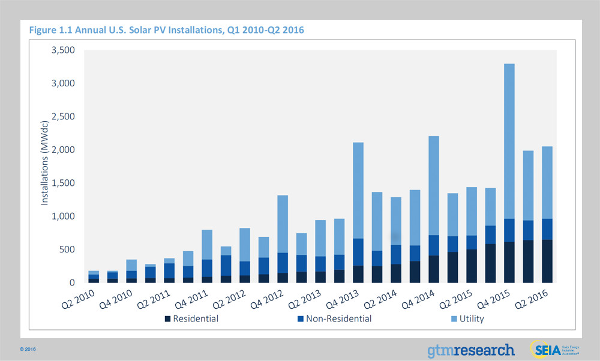 Wind energy prices are also dropping. The Wall Street Journal reported that wind power generation more than doubled since 2010, thanks to the rapid addition of new wind farms.

In fact, the cost of wind generation has plummeted more than 57% over the last five years, and it now supplies roughly 200 million megawatt-hours of electricity — or 5% of total U.S. electrical generation.

More importantly, neither should you.

We’re not atop some soapbox next to the White House.

The landscape of energy is dramatically different now than in 1908. The transition didn’t happen overnight; it was a century of reducing the reliance on coal that we’ve built up since the industrial revolution spread across the world.

Fortunately, you and I have a front seat for the next one... and you can bet it will be fueled by these rapidly developing alternatives to coal.