Most investors didn’t see this one coming.

A few weeks back, we talked about a group of profitable oil stocks that you don’t hear about often. These little-talked-about pick-and-shovel companies were set to make a mint as U.S. oil output swelled to 11 million barrels per day.

The premise was simple.

Today, a huge chunk of our domestic production comes from the massive tight oil and gas resources in the Lower 48. The EIA estimates that in July, just seven of those tight oil and gas regions will produce an average of 7.3 million barrels per day and 69 billion cubic feet per day.

To give you a bit more perspective on this, that means seven out of every ten barrels of oil produced in the United States comes from one of these regions.

Oh, and for the record, they also account for nearly 75% of our country’s natural gas production, too.

Considering the fact that every single one of those wells will need to receive some form of fracture stimulation, you can understand why we were looking into companies like Hi-Crush Partners (NYSE: HCLP), a billion-dollar frac sand supplier whose shares popped 40% over a three-day period toward the end of July.

You and I both know there are more opportunities than this.

And it turns out they’re coming from a sector that has been outperforming everyone.

It’s good to be the king, and right now our refiners are sitting on the throne.

Like I mentioned from the start, it wasn’t something the average investor caught onto.

So why didn’t more people take advantage of the refiners whose profits started soaring on the back of the shale boom? After prices crashed during the summer of 2014, refiners suddenly found themselves in a very enviable position.

These companies had access to a lot of cheap oil.

Up until that point, the 40-year export ban on crude oil was still in effect.

It was like shooting fish in a barrel, and the lower oil fell, the better position these refiners were in.

Well, we both know what happened next, don’t we?

In December of 2015, Congress lifted the ban.

As expected, the downstream-sector refiners took a hit in 2016 as a war of words broke out with U.S. drillers, who themselves suddenly had other options for selling crude.

It turns out these oil refiners have had one helluva run since... and it may not be over for quite a while.

There’s no question that this summer has been strong for oil refiners.

Valero (NYSE: VLO) just released a monster earnings report that showed it raked in $31 billion in sales and generated earnings of $2.15 per share — both of which beat the consensus on Wall Street.

It’s not alone in reporting good news to investors.

Phillips 66 (NYSE: PSX) also posted a positive surprise when its second quarter earnings came in at $2.80 per share.

If you’re curious as to how these two refiners stack up against Exxon, one of the largest publicly traded oil companies on the planet, the returns aren’t even close: 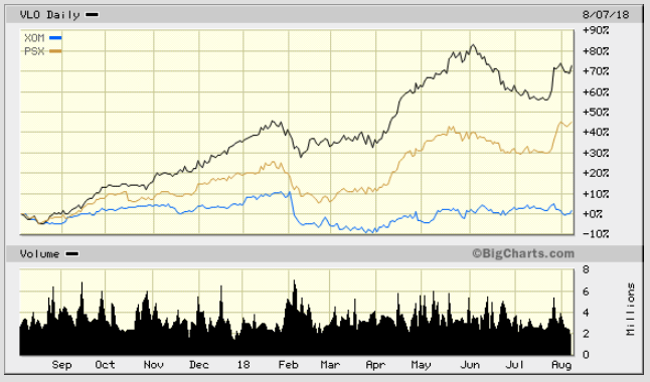 Together, Valero and Phillips are trading for only one-third of the market cap of ExxonMobil’s $344 billion oil empire.

I’ll bet you know exactly which shares you’d rather be holding.

The real question, however, is what comes next.

Global demand for petroleum products is still strong, and pipeline constraints in West Texas are helping to keep a lid on crude prices.

Remember, cheap oil is a great catalyst for these refiners.

And it’s not just the drillers that can tap into global markets. U.S. exports of petroleum products are at all-time highs, according to the EIA.

Until we see a crack in global demand, I’d be looking downstream in the second half of 2018.