Overlooking Billions of Barrels of Oil

We can't really blame our Commander-in-Chief for wanting more oil...

Our domestic situation has been pretty grim since U.S. oil production peaked in 1970.

One look at our largest oil-producing states would make most stout-hearted oilmen wince: 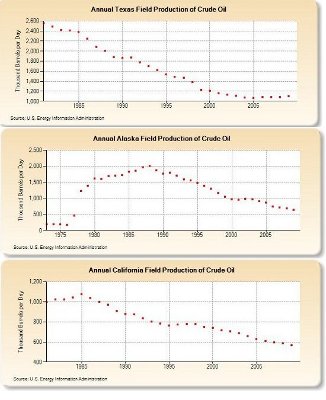 Unfortunately, when Obama said recently that we'll help Brazil develop its offshore oil fields, he completely missed the boat — even stating at one point:

We want to help you with the technology and support to develop these oil reserves safely. And when you're ready to start selling, we want to be your best customers.

Yes, it's true that oil from the Tupi field is much more preferable than the geopolitically volatile Middle East crude.

In fact our imports of crude oil from Brazil have been significantly growing over the last ten years...

We now import about 295,000 barrels of oil from them every day. Of course, that's thanks mostly to the now-famous Tupi oil field.

Five years ago, the Tupi discovery was made off the coast of Rio de Janeiro and is hailed as the largest oil find in 30 years.

Sadly, our imports from Brazil are only a drop in the bucket compared to our 11 million bbl/day addiction to foreign oil. OPEC still commands a 41% share of our crude imports.

And yet, the soon-to-be three million barrels of Canadian oil that we receive on a daily basis is still better than both those options. (We'll save that topic for another rainy day.)

So, is Obama's longing gaze at Brazil's offshore potential really so bad?

Even though the Tupi discovery in the Santos Basin has up to 8 billion BOE of recoverable reserves, it's going to take billions of dollars to develop it.

Remember, the oil field is more than a mile underwater — and then an additional two to three miles beneath a layer of rock and salt.

As I said, this oil and gas won't come cheap.

Day rates for offshore rigs can be astronomical, and drilling can take up to two months. Last year, a deepwater drilling rig cost an average of $420,000 per day.

Obama seems to have forgotten the oil boom happening in our own backyard...

More than likely, you've come across the Williston Basin a few times before.

It's a sedimentary basin that stretches about 300,000 square miles across North Dakota, South Dakota, Montana, Saskatchewan, and parts of Manitoba. 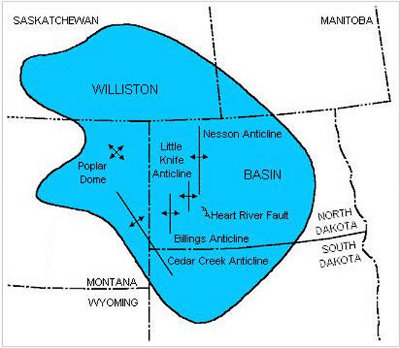 The basin also happens to be home to the Bakken shale. As you know, the latest USGS assessment has stated the Bakken formation holds up to 4.3 billion barrels of technically recoverable oil.

And you probably know how North Dakota's Cinderella Story has played out since that USGS report. The state's oil production has jumped 213% over the last three years!

And it gets even better...

Believe it or not, the Williston Basin isn't a one-trick pony.

While most people can see beyond the burgeoning activity in the Bakken formation, we can expect to see the Williston Basin's potential blossom over the next several years.

For starters, the Three Forks formation lies directly beneath the Bakken, adding several more billion barrels of oil to the reserve tally.

Other areas (the Tyler and Spearfish formations are two that immediately come to mind) are also beginning to attract more attention. However, the lesser-known plays have their own obstacles to overcome.

For starters, it's easy to take a backseat to the Bakken. We know that pipeline capacity in North Dakota reached its maximum years ago. That creates several problems.

Enbridge (NYSE: ENB), for example, will only ship sweet crude (oil with a lower sulfur content) in its pipelines. Since oil from the Spearfish formation is considered sour, companies would be forced to ship their production via trucks — a more expensive option.

The Tyler formation, lying less than half a mile above the Bakken formation, reportedly holds between 4-8 billion barrels of recoverable oil. Regrettably, vertical wells drilled into the Tyler formation can't keep pace with production from the horizontal Bakken-Three Forks wells.

Let's face it; things aren't so rosy in the Bakken formation's shadow.

In 2010, more than 75 percent of their overall production came from the Bakken formation. It's no wonder that nearly all of the 170 drilling rigs in the state are operating in the Bakken.

If you added last year's production from both the Tyler and Spearfish formations, you have less than .05 percent of the state's production.

Investing in the Williston Basin

Here's the reality of the situation: No matter how bullish you are about the Williston Basin, it's not a panacea to our oil woes.

As you know, many of those Bakken drillers have made investors a small fortune — and for good reason. Their success has helped North Dakota become our fourth largest oil-producing state.

Now, I'm not suggesting that production from the area will reach five million barrels a day — or even close to that. It's simply not going to happen...

However, when considering faltering production in California and Alaska, I wouldn't be surprised to see North Dakota overtake the third — and possibly even the second — position within the next decade.

It's the reason investors are thinking of the next step in the shale boom.

But this next step won't come from drilling more, or cutting bait and hoping Brazil can bail us out in twenty years...

It will come from improving technology.