The War Within OPEC

It’s the end of OPEC as we know it, and I feel fine.

Look, I know my pessimism over OPEC’s fate doesn’t come as much of a surprise to you. Our investment community has seen the writing on the wall for OPEC for a long time.

But can you really blame us?

Aside from the fact that OPEC production quotas have been a running joke for decades, we’re talking about an oil cartel that has pulled off some ridiculous antics.

Just think back to the early 1980s when Iraq announced a huge increase in its declared reserves. Within two years, Kuwait did the same.

Well, if Iraq and Kuwait could do it, why not everyone else?

In 1988, five member countries more than doubled their stated reserves from the previous year. It also marked the second time in five years that Iraq drastically boosted its reserve count.

You can see those suspicious increases for yourself below: 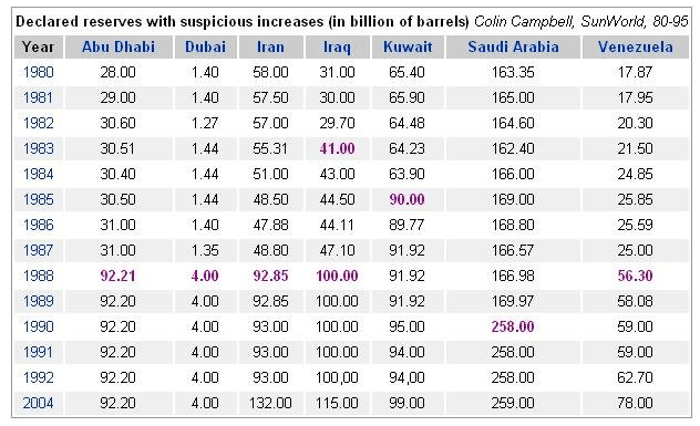 It doesn’t get much shadier than that, folks.

But remember, just because you have crude oil in the ground doesn’t mean a thing if you can’t afford to extract it. Venezuela claims it is sitting on 303 billion barrels of proven crude reserves — far more than any other country on the planet.

So much for quantity over quality.

Today, let’s look past the lies OPEC has fed us over the last 40 years.

OPEC has a bigger enemy to deal with right now.

The War Within OPEC+

My colleague Sean McCloskey hit the nail right on the head last Friday when he told you about a bullish case for oil.

In the last few days, it’s become uncomfortably clear that a feud is raging within OPEC+, which consists of traditional OPEC members plus Russia and a few smaller oil-producing countries.

Now we know just how bloody this battle has become.

Yesterday’s meeting to decide whether or not to extend its production cut deal ended abruptly.

And no, this has nothing to do with COVID-19.

You see, the loose alliance of OPEC+ members was set to ease the output cuts by 2 million barrels per day starting next month.

The infighting was too much to take and the meeting was rescheduled for tomorrow.

We can guess who’s on what side in this argument.

The Saudis are trying to extend the cuts into 2021, while Russia wants to start boosting output gradually.

Of course, Sean mentioned that Qatar was leaving OPEC for gassier pastures. It wasn't the only member holding some animosity for the group.

Ecuador abandoned ship on January 1, 2020, due to internal challenges it has to deal with relating to its fiscal sustainability.

Although Ecuador was far from a powerhouse producer within the oil cartel, only extracting around 545,000 barrels of oil per day, it is a prime example of why OPEC as we know it is doomed.

In Ecuador’s case, the country had its membership suspended back in 1992 and then reinstated in 2007. After its most recent departure, it’s unlikely we’ll see it back on the world stage anytime soon, at least not until it manages the monstrous foreign debt crushing it.

Malaysia was kicked out shortly after joining OPEC. Despite getting the boot, it was interesting that it was allowed to join in the first place — Malaysia is a net oil importer!

The only strength OPEC has left is held by just a few members and ruled by the Saudi crown.

Without Russia, however, its control is greatly lessened.

Together, the two account for roughly two-thirds of what OPEC+ pumps out daily.

Yet there’s a dirty little secret that few have caught onto: It doesn’t matter what OPEC+ ultimately decides.

There are catalysts lined up in 2021 that will inevitably push oil prices higher… and nothing OPEC+ says or does can slow this momentum.

We’ll talk about the biggest one next week.