The world’s biggest energy producers are sitting on a secret that threatens to unravel the entire market.

Instead of embracing progress and investing in the future, massive corporations like Shell and BP are clinging to the past — at your expense.

Public opinion and government pressure have been forcing the fossil fuel industry into a corner for years now. The people have spoken, and they want a new era of energy today.

Renewable energy opportunities are creating new millionaires on a daily basis. And believe me, that absolutely terrifies fossil fuel producers.

Like cornered animals, oil and gas companies are fighting for their lives. And they certainly aren't going down without a fight.

Can We Really Blame Them?

So what would any business do to recoup the billions of dollars it sank into a soon-to-be obsolete technology?

If you said “Learn from the loss and focus on a greener future,” you would be very wrong! But I envy your optimism.

Instead, the fossil fuel industry threw everything it had left into a spin campaign.

Since the “clean coal” myth of yesteryear wasn't fooling anyone, natural gas was the obvious choice for a cleaner fuel. 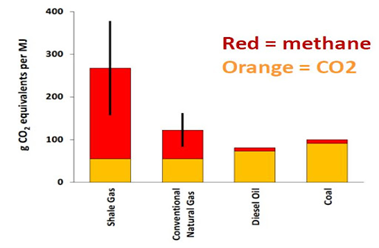 By disguising natural gas as an ally to renewable energy, producers dodged most of the nasty PR that follows fossil fuels.

But they can't hide forever.

Who Started This “Bridge Fuel” Myth?

Labeling natural gas as a cleaner “transition fuel” was the crowning achievement of the fossil fuel industry’s propaganda campaign.

Companies with huge amounts of money invested in oil and gas drilling have suddenly started showing great concern about the environment. Unsurprisingly, this change of heart occurred around the same time that their precious profits were threatened.

Switching to natural gas would supposedly help slowly wean our society off fossil fuels, they said.

Since the gas is cheap, abundant, and relatively clean, they want us to believe that it will help smoothly “bridge” the gap to an all-renewable economy.

But as it turns out, that's not entirely true...

In all fairness, natural gas does release less CO2 when burned than coal or oil. But that’s only half the picture.

The natural gas industry unearths huge amounts of methane during production and transport. Half the time it is intentionally vented for maintenance. And don't even get me started on wasteful gas flaring.

It’s clear that the future of energy has no place for fossil fuels. With each passing day, renewable energy gets cheaper and cheaper.

And every day, it becomes harder and harder to spin the myth of “clean” natural gas.

Leaving Behind Our Gas-Filled World

Don't get me wrong — top-level oil and gas producers know their time is coming to an end. They've already invested heavily into decarbonization and green fuels.

They know the end is coming, but dragging their feet for as long as possible is a more profitable exit scam.

At this point, natural gas may not even be the cheapest option for long. Renewable energy costs have been in free fall for almost a decade now. And I’m willing to bet they can get much lower.

Next-generation renewable fuels will be the savior of the world’s energy economy, not natural gas.

In fact, one particular breakthrough could make all other types of power generation obsolete. A new type of fuel could be powering the world in the very near future.

This bizarre new substance can provide more energy per pound than anything else we've ever seen. Just a few ounces contains enough energy to power your car for more than a decade.

The company behind it is small, but big-name hedge funds are already lining up to get a piece.

My associate, our resident energy guru Keith Kohl, wasted no time in calling out this game-changing play.

As always, his research is ongoing. The full details behind it are available here for investors who want to profit off the decline of the fossil fuel industry.